6 in 7 people worldwide experience ‘high levels of insecurity’ – Why? 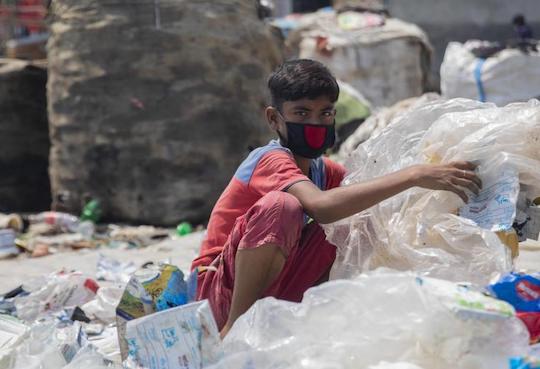 Safety and security are at the base of the ‘hierarchy of needs’ pyramid, second in importance only to life’s absolute necessities—air, water, food and shelter, warns a new report. By Baher Kamal for IPS News.

The report “Why we don’t feel safe,”elaborated by the UN Development Programme (UNDP) and released on 8 February 2022, adds that in the years leading up to the COVID-19 pandemic, people were on average living healthier, more prosperous and better lives than ever.

“Yet still a growing sense of unease has taken root and is flourishing.”

It says that six out of seven people all over the world—including in the wealthiest countries— were experiencing high levels of insecurity even before the pandemic.

COVID-19 may have supercharged this feeling. Unlike any other recent crisis, it has laid waste to many dimensions of our wellbeing and set human development back.

“As well as the appalling health consequences, the pandemic has upended the global economy, interrupted education and life plans, disrupted livelihoods and stirred political division over masks and vaccines.”

Even with the distribution of vaccines and the partial economic recovery that began in 2021, the crisis has been marked by a drop in life expectancy of about one and a half years, UNDP further goes on.

So far so good. However, the human suffering is most spread among the poor, rather than the rich. Just take the Sahel region as an example. Africa’s Sahel region is facing ‘horrendous food crisis,’ the World Food Programme (WFP) on 16 February 2022 warned.

As the Sahel region “stares down a horrendous food crisis”, the UN emergency food relief chief warned that the number of people on the brink of starvation has “increased almost tenfold” over the past three years and “displacement by nearly 400 percent.”

The vast Sahel, which runs nearly the breadth of the continent, south of the Sahara Desert, is experiencing some of its “driest conditions” in years.

“In just three years, the number of people facing starvation has skyrocketed from 3.6 to 10.5 million, in the Sahelian nations of Burkina Faso, Chad, Mali, Mauritania and Niger.”

And insecurity, COVID-induced poverty, dramatic food cost increases and other compounding factors, have put those countries and others in the region, on a trajectory that would surpass any previous crises, according to WFP.

“I’ve been talking with families who have been through more than you can possibly imagine”, Beasley said. “They have been chased from their homes by extremist groups, starved by drought and plunged into despair by COVID’s economic ripple effects”.

On the brink of starvation

The combined effects of conflict, the COVID-19 pandemic, climate, and rising costs are putting basic meals out of reach for millions.

Let alone Afghanistan, where conflict last year (2021) had forced more than 700,000 Afghans to leave their homes and added to the 5.5 million people already displaced over past years, the International Organization for Migration (IOM) on 8 February 2002 reported.

“The ongoing crisis in Afghanistan is intensifying humanitarian needs and increasing displacement risks both inside the country, as well as across borders to countries in the region”, according to a statement issued by Ugochi Daniels, the IOM Deputy Director-General for Operations.

Back to the UNDP special report on unsafety and insecurity, it also warned that in tandem with this comes a growing distrust in each other and in the institutions which are, in theory, designed to protect us.

“The world has always been in flux, but the challenges we face today as technology advances, and we experience inequality and conflict, are playing out on a different stage.

“Because we are now in the Anthropocene, the era in which humans are changing the planet in dangerous ways that our species has never seen.”

It’s a deadly dance and no-one is immune from its consequences, UNDP warns.

“Despite global wealth being higher than ever before, a majority of people are feeling apprehensive about the future and this feeling has likely been exacerbated by the pandemic.”

“In our quest for unbridled economic growth, we continue to destroy our natural world while inequalities are widening both within and between countries,” said Achim Steiner, UNDP Administrator.

Climate change is likely to become a leading cause of death. With a moderate decline in carbon emissions, it could still cause 40 million deaths before the end of the century.

“The Anthropocene era is adding fuel to conflict, as human lives become more precarious. Conflicts involving the state—raging in 37 countries—are the highest since the end of World War II.”

According to the UNDP report, violence is becoming normalised in many places, and the number of people forcibly displaced due to conflict or disaster has risen over the past decade, reaching more than 80 million in 2020.

“About 1.2 billion people live in areas affected by conflict—almost half of them in countries not considered to be fragile.”

“Old inequalities are still with us despite advances in wealth and living standards. And a new generation of inequalities is opening up. These include the ability to flourish in a modern economy, and access to now-necessary technology such as broadband internet.”

“At the same time as digitalization can connect communities, encourage new skills and education, and promote human security, social media is spreading misinformation and fueling polarisation.”

In 2017, an estimated 95 percent of companies in Africa were rated on or below the cybersecurity ‘poverty line’, unable to protect themselves from malicious attacks, the report adds.

“The damage of cybercrime was estimated to cost about US$6 trillion in 2021, a 600 percent increase since the beginning of the pandemic in 2020.”

Report: Food insecurity soaring across 20 hunger hotspots
According to the Hunger Hotspots Report from the World Food Programme and Food and Agriculture Organization, Ethiopia, Nigeria, South Sudan and Yemen...
News: UN food agency says 13 million Yemenis may face starvation
The head of the U.N. food agency has warned that 13 million Yemenis are headed for starvation due to a protracted civil conflict and a lack of funding for...
Report: The poor die from COVID while the rich get richer, Oxfam warns
The coronavirus vaccine divide is costing lives and supercharging inequalities worldwide, a new report from Oxfam warns.
Blog: The people of Afghanistan are starving; to turn our backs on them is morally wrong
This is the new world order revealed at its most selfish and morally defective: countries trapped in a geopolitics that puts military and economic...
Report: More than half a billion people pushed or pushed further into extreme poverty due to health care costs
New evidence compiled by the World Health Organization and the World Bank shows that the COVID-19 pandemic is likely to halt two decades of global...
Printer-friendly version