Call to the G20 to invest in healthcare instead of militarisation 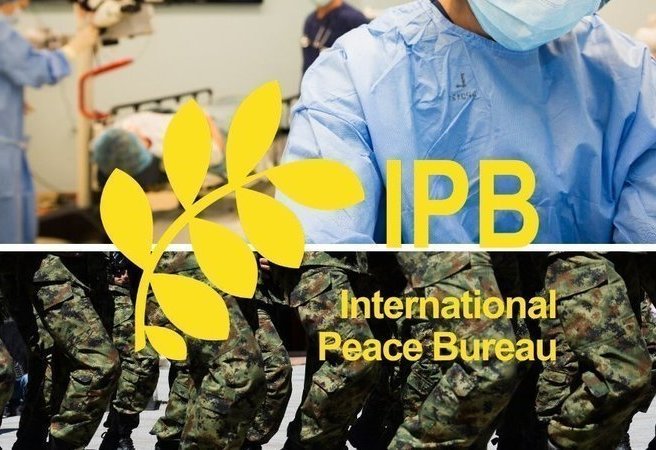 Sign a petition from the International Peace Bureau (IPB) calling for a dramatic reduction of military spending in favour of healthcare and meeting social needs.

The world’s oldest peace NGO, the Nobel Prize-winning IPB has called on G20 world leaders who are gathering via virtual means this coming week to send a message of peace and solidarity to the world as they address the global health emergency.

This is a time to open a new page in global relations to put geopolitical tensions to one side, to end proxy wars, for a ceasefire in those many conflicts around the world all of which stand to hamper a global solidarity effort.

We have to lift the shadow of war and military brinkmanship which has blighted global cooperation in recent years and work to ensure that a spirit of peace and solidarity prevails.

The IPB has long drawn the world’s attention to the increasing velocity of the global arms race.

Our communities are paying a high price for an arms race that has diverted resources from the basic health and welfare needs of the people.

We are all paying a heavy price for failed leadership and misplaced market-driven practices that have weakened our means to address this emergency, which has hit the weakest hardest.

We are now seeing the consequences of underinvesting in healthcare infrastructure, hospitals, and staff.

Hospitals are overburdened, nurses are exhausted, materials are scarce, and life and death decisions are made on who can and cannot have access to the scarce number of ventilators available. Doctors and nurses are handicapped by the irresponsibility of past political and economic decision making.

All over the world, health systems are reaching the limits of their strength and heroic front-line staff are under massive pressure.

The coronavirus emergency shows what a weakened state our societies find themselves in to protect the people: a world driven by financialization, shareholder value and austerity have weakened our ability to defend the common good and placed human life in danger on a global scale.

Employees fearful of job and income loss are tempted to go to work sick. Older people are vulnerable and need help. The virus hits the weakest hardest.

Privatization, austerity measures, the neoliberal system have brought the local, regional and national health services to the brink of collapse.

In the last two decades the number of doctors working in the healthcare system has been reduced by a third in Western European countries.

In Italy, the healthcare budget has been cut by 37 billion euros in recent years.

The WHO warns that we are facing a shortage of 18 million healthcare workers by 2030.

Municipalities urgently need support in order to increase numbers of available staff. And now these policies are taking their toll, especially where hospitals have been closed on a massive scale in recent years (or privatized for the benefit of the rich), and in some (particularly rural) regions this has restricted basic care.

We can already draw lessons for the future:

Time for a Global Social Contract

As each hour passes, the full scale of the crisis becomes clearer.

This week the ILO reported on the labour market consequences:

We support the efforts of the trade union movement globally, regionally and nationally, in their call for a new social contract.

We support their call for economic measures and resources to protect jobs, incomes, public services, and the welfare of people.

This requires a commitment from the business community to keep people in work and the support they are promised to receive from their governments must be conditional on their adhering to the social contract for job security and incomes.

World military exercises cost more than 1 billion dollars each year, and arms production and arms exports are on the increase in the world’s leading economies.

The G20 cannot sweep these facts under the carpet. Military spending is 50 per cent higher today than at the end of the Cold War. It stands at a staggering 1,8 trillion US dollars a year, while NATO is demanding further increases from its members.

The G20 are responsible for 82 per cent of global military spending, account for almost all arms exports, and hold 98 per cent of the world’s nuclear bombs on their collective territory. The G20 is a shared platform that brings together the interests of the main players in the global arms race.

In addition, billions are spent on military research, money which would be better invested in health and human needs and research to help the fight against global climate change.

Militarization is the wrong path for the world to take; it fuels tensions and raises the potential for war and conflict and aggravates already heightened nuclear tensions.

Even so, the policy architecture that was put in place to control nuclear expansion and disarmament is ignored or even weakened.

The Bulletin of the Atomic Scientists’ 2020 Doomsday Clock published in February stood at 100 seconds to midnight – the closest it has been to midnight in its 70-year history – and this global pandemic has pushed the second hand even closer.

World leaders must put disarmament and peace back in the center of policy making.

Global leaders have to develop a new agenda for disarmament and that includes the banning of nuclear weapons. We call once again for governments to sign on to the TPNW.

Without it, we are handicapping our fight against future health pandemics, to eradicate poverty, hunger, to provide education and healthcare for all, as well as the realization of the SDG 2030 goals.

Disarmament is one of the keys to the great transformation of our economies, to ensure that human beings and not profit are most valued; economies in which ecological challenges – above all the crisis of climate change – will be solved and global social justice will be pursued.

With disarmament the implementation of the SDGs, a global social contract, and a new global green peace deal, we can address the challenges of the coronavirus pandemic.

We are calling for a culture of peace. A peaceful path means that we need a global strategy, a global social contract, and global cooperation to ensure planet-wide support for people. This will be the human solidarity of the 21stcentury – for and with the people.

IPB is willing and able to work on establishing this peaceful path – in collaboration with partners all over the world.

That is why we say that an initiative from the G20 to move away from a culture of militarization towards a culture of peace is both urgent and necessary.

Sign the petition to the UNGA, based on this statement

Blog: 3% of U.S. military spending could end starvation on earth
A billboards project from World Beyond War highlights how little of current U.S. military spending could permanently end hunger and extreme poverty...
Article: Can the world’s second superpower rise from the ashes of twenty years of war?
As the US looks to the future in this election year, what are our chances of reviving the second superpower on our planet to end America’s wars - namely,...
Article: If America can find $716bn for the military, it can fund the Green New Deal
At long last the political debate in the world’s richest country is vibrant with proposals that would help the most vulnerable in our society. And what do...
Blog: How can we turn military spending into a budget for the people?
While President Trump’s 2018 budget proposes giving more than $700 billion to the military, it will come at the expense of trillions of dollars in cuts to...
Printer-friendly version