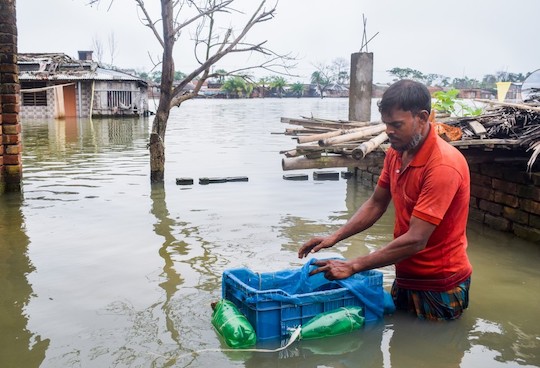 Governments must start treating the climate crisis as a national security concern on a par with war as climate breakdown threatens countries’ stability and safety, the global chief of the Red Cross has warned.

Jagan Chapagain, secretary general of the International Federation of Red Cross and Red Crescent Societies, said: “People should be seeing the climate as a national security issue, as it is having an impact on national security. We need to see that the climate crisis is not only having an environmental impact, but a very significant security impact.”

Chapagain was speaking before the publication of a scientific report from the Intergovernmental Panel on Climate Change (IPCC) on Monday, which is expected to show that the impacts of the climate crisis are greater than feared, and that governments must act rapidly to prepare for extreme weather and its consequences.

The Red Cross has warned that at least 1.7 billion people already face serious problems, including food and water shortages, arising from or made worse by the climate crisis. Before the outbreak of Covid-19, the organisation – which works in conflict zones and with those affected by disasters – found that 2 million people a week needed humanitarian assistance owing to the impacts of climate breakdown.

Chapagain said: “Every inhabited part of the world is affected. Through our work in responding to disasters, we can see this is clearly having an effect – you can see it now, with the naked eye, that this is happening. Unfortunately, I don’t think we are as prepared as we should be.”

More people are facing hunger, water shortages and the prospect of having to move to avoid natural disasters such as floods, droughts and extreme temperatures, he said.

“There are impacts on displacement; we did a study last year that found more displacement from the climate than from conflict,” he said in an interview with the Guardian. Most of that displacement is currently happening within national borders, but that can still have an impact on national security and the potential for conflict, he added.

“We must take a holistic view. The climate crisis affects national security, and this must take much greater priority for governments than it has done,” he added. “If we respond in a piecemeal fashion, we will underestimate the enormity of the climate crisis.”

All government departments must be included in the response to climate breakdown, Chapagain said. “There is a complete disconnect at the moment,” he added.

The IPCC, the body of the world’s leading climate scientists, will publish its report on Monday on the impacts of the climate crisis, covering which areas are most vulnerable, and advising on how countries must adapt to the impacts of extreme weather that are now inevitable even if the world succeeds in limiting global heating to 1.5C above pre-industrial levels.

This is the second of four parts of its “sixth assessment report”, the latest in a series of comprehensive summaries of the world’s knowledge of the climate, stretching back to 1988. The first part was published last August, while a third part, to be published in April, will set out the means of dealing with the crisis, such as investing in renewable energy and novel technologies such as carbon capture.

As IPCC reports take between five and seven years to compile, the current assessment is likely to be the last while there is still time to stave off the worst ravages of climate breakdown. Global greenhouse gas emissions must halve by 2030, to stay within 1.5C, the IPCC has previously warned, but after the plunge caused by the lockdowns, global carbon dioxide emissions have bounced back and are set to rise strongly again this year.

News: 'Climate apartheid' to push 120 million into poverty by 2030, UN says
The world is facing a "climate apartheid" between the rich who can protect themselves and the poor who are left behind, the UN has warned in a new report...
Report: Energy inequality plagues the world; US causes 585 times more climate emissions than Congo
An analysis by the Center for Global Development reports that the average Briton produced more carbon dioxide in the first two days of January than an...
Article: Fossil fuelled foreign policy: Why COP26 flopped
With continuing hypocrisy and obstructionism by governments of major countries at global climate talks, humanity’s best hope lies in the social movements...
Report: Carbon emissions of richest 1% set to be 30 times the 1.5°C limit in 2030
The carbon footprints of the richest 1 per cent of people on Earth are set to be 30 times greater than the level compatible with the 1.5°C goal of the...
Report: The intersection of politics and spirituality in addressing the climate crisis
The following interview with STWR’s founder, Mohammed Sofiane Mesbahi, examines both the contemporary political and profounder spiritual implications of...
Printer-friendly version