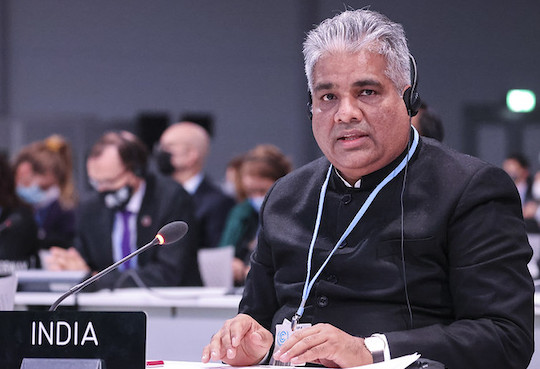 With continuing hypocrisy and obstructionism by governments of major countries at global climate talks, humanity’s best hope lies in the social movements of the most marginalized, writes Basav Sen for FPIF.

The UN climate talks (Conference of the Parties, or COP26) in Glasgow, Scotland, concluded in mid-November with deeply disappointing results. In spite of what the global scientific community has termed a dire climate emergency, countries made weak commitments that condemn the world’s most vulnerable people to what Ugandan youth climate activist Vanessa Nakate has called ​“a death sentence for communities like mine.”

There were a handful of bright spots. One of them was the launch of the Beyond Oil and Gas Alliance,“ an international coalition of governments and stakeholders working together to facilitate the managed phase-out of oil and gas production,” by Costa Rica, Denmark, and several other national and subnational governments (including California). The United States, the world’s largest oil and gas producer, was conspicuously absent.

But the disappointments far outweighed the successes. Wealthy countries failed to deliver on their promise of $100billion in annual climate finance for poor countries, and refused to launch a loss and damage funding facility for poor countries to help them rebuild and recover after climate disasters.

One disappointing outcome, however, stands out for lifting hopes for a fleeting moment before cruelly deflating them again.

For the first time in the nearly-three-decade history of UN climate talks, the Glasgow Climate Pact mentioned fossil fuels. The language merely mentioned ​“accelerating efforts towards the phase-out” of coal and fossil fuel subsidies, leaving the door open to unsubsidized oil and gas. But it was at least a beginning.

Then, a last-minute push led by India — reportedly with support from China, Saudi Arabia, Australia and other countries — led to further dilution of the language.

This was a disastrous outcome, where even a baby step toward a global fossil fuel phase-out was obstructed. The Indian government’s stance is hypocritical given its posturing as a climate leader. But are Western, and particularly U.S., observers right to blame India and other less wealthy countries for the failure to address fossil fuels for the first time in the UN climate talks?

If we want a livable future, there’s no future for any fossil fuels, not merely coal. Oil and gas are also major contributors to climate change.

Greenhouse gas emissions from natural gas could equal emissions from coal if there are significant leaks of methane (a shorter-lived but more powerful climate pollutant than carbon dioxide) from the production and transportation of natural gas. And methane leaks from fracking are underreported — they could be a more serious problem than official data show.

Seen in that light, it’s unfortunate but understandable that major coal-producing countries (especially ones that don’t have significant oil reserves, such as India and China), would feel singled out by a COP26 declaration that called for phasing out coal while remaining silent about oil and gas.

The Indian government’s actions must also be viewed against the backdrop of global inequalities in income, energy consumption and greenhouse gas emissions. These inequalities point to vast differences in who is more responsible for climate change in the first place — and who can afford an energy transition most easily now.

The inequality is also clear from cumulative greenhouse gas emissions since the start of the industrial era — a relevant measure because of the very long lifespan of atmospheric carbon dioxide. India’s cumulative emissions are about asixth of those of the United States, which is alone responsible for a fifth of cumulative global emissions.

Before pointing fingers at India, observers in the United States should consider a fundamental question of fairness. It’s an ethical imperative for the countries most responsible for the climate crisis — and who have built fabulous wealth from more than a century of fossil-fueled industrialization — to pay their fair share for a just transition away from fossil fuels in poorer countries. Hundreds of civil society organizations worldwide have articulated this demand.

And they should pause to think about their own government’s responsibility for wrecking the UN climate talks.

Back Home in the USA

Who benefits from a global climate agreement that calls for phasing out coal but gives oil and gas a free pass? Literally no one other than the oil and gas industry — and major oil and gas producing countries such as the United States.

While the United States also produces coal, our coal production is in terminal decline because of competition fromcheap natural gas. Meanwhile, our oil and gas production are growing rapidly.

Since coming into office in January 2021, the Biden administration has for the most part continued the prior U.S. policy of boosting the domestic oil and gas industry, with only a few exceptions, such as the cancellation of the Keystone XL pipeline.

The president has extensive executive powers to stop issuing permits for new fossil fuel projects — and to revoke questionable permits for projects currently under construction. Far from using these powers, the Biden administration has allowed controversial projects such as the Line 3 tar sands pipeline to proceed.

Following the announcement of a moratorium on oil and gas leases on public lands and waters, the administrationreversed course after an adverse U.S. District Court ruling, opening up the Gulf of Mexico to the largest U.S. offshore oil and gas leasing auction ever just days after COP26 concluded. Legal experts argue that the administration did not have to proceed with this lease sale regardless of the court order and that the environmental analysis the administration used to justify the sale is outdated and illegal.

These are just two examples of the Biden administration’s pattern of enabling the oil and gas industry through government action and inaction. Clearly, pushing to exclude oil and gas from the Glasgow agreement language — and thereby setting up a dispute with countries such as India — would be consistent with U.S. domestic energy policy.

There are no good guys in this story. Unfortunately, the government of India is using legitimate questions of international fairness as political cover for delaying India’s energy transition.

The Narendra Modi government has close political ties with large corporations, including the Adani conglomerate, which has interests in coal and other fossil fuels. And as in many other countries, India’s coal industry has serious environmental justice impacts.

The Indian government is planning a massive expansion of coal mining, a backwards step during a climate emergency. Eighty percent of the proposed new mines are on Adivasi (Indigenous) lands. Adivasi movements against coal mining have denounced Prime Minister Modi for greenwashing India’s image at COP26, even as his government expropriated Adivasi lands for politically connected corporations.

Burning this coal has serious air quality impacts and consequent public health effects. Ironically, the week after COP26, the government temporarily closed five coal power plants in the proximity of Delhi, the national capital, because of an air quality emergency.

The government of India would have more international credibility if its position on a coal phase-out at COP26 was backed by serious action for a just transition at home that was inhibited solely by resource constraints, instead of crony capitalist support for a polluting domestic coal industry.

The Power of Social Movements

With continuing hypocrisy and obstructionism by governments of major countries at global climate talks, humanity’s best hope lies in the social movements of the most marginalized.

Meanwhile, the Indian farmers’ movement, one of the largest social movements in world history, has compelled the government to repeal farm procurement laws that placed famers at the mercy of corporations. While the farmers’ victory may not have immediate relevance to struggles against coal, it has connections with climate justice, and is an example of the power of grassroots social movements.

It’s movements like these that will save humanity from the climate crisis.

This article was jointly produced by In These Times and Foreign Policy In Focus.

Article: Civil society blasts lack of progress at Cop26 during final day
Activists and civil society representatives have accused rich nations at COP26 of a "shameful" lack of ambition. Reported by Leftfootforward.org
News: G7 climate commitments judged too weak to bag COP26 success
Green groups say a lack of fresh finance to help developing countries adopt renewable energy and adapt to a warmer planet threatens key climate talks in...
Report: Carbon emissions of richest 1% set to be 30 times the 1.5°C limit in 2030
The carbon footprints of the richest 1 per cent of people on Earth are set to be 30 times greater than the level compatible with the 1.5°C goal of the...
Report: New report urges equitable phase out of fossil fuels to keep alive 1.5°C
A fair share analysis finds current pledges from wealthy countries fall much further below the mark than previously understood, demonstrating the need for...
Article: Climate justice means debt justice
A climate debt is owed. It is owed by the richest countries, whose carbon emissions—through centuries of industrialisation made possible by colonial...
Printer-friendly version