'It's unfair': UN envoy reports on the reality of poverty across the UK 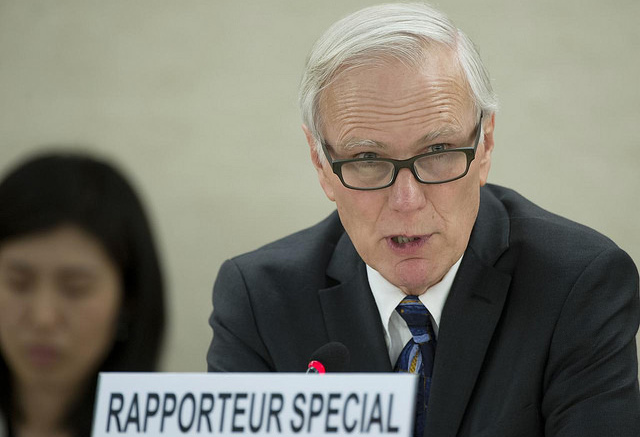 As the UN Special Rapporteur, Philip Alston, tours the UK this week, discussions are dominated by a big question: should poverty essentially be made illegal?

The United Nations rapporteur on extreme poverty and human rights squeezed onto a school bench alongside a dozen children in one of Glasgow’s most deprived neighbourhoods and posed a question: “Who should help poor people?”

“The rich people,” Soroush, one of the children, shot back. “It’s unfair to have people earning billions of pounds and have other people living on benefits.”

It was perhaps the frankest answer Philip Alston received on a two-day visit to Scotland, where a million people live in relative poverty, including one in five children.

After an itinerary dominated by meetings with politicians and charities, the world-leading human rights expert ended his week at Avenue End school, which serves some of the most deprived neighbourhoods in Scotland. In places like Craigend and Ruchazie about 30% of adults are on benefits and life expectancy for men is about a decade less than in the affluent south of the city.

The children were asked to jot down what being poor might mean for a person. John Adebola-Samuel, 12, quietly penned: “He cannot afford meals. He cannot buy trainers. He cannot watch TV.”

John’s family relied on food banks for two years and for a long time he only took bread and butter to school for lunch.

“I got hungry because I was smelling the other food,” he said. “I had to take my eyes away from it. The most unfair thing is the government knows families are going through hard times but they decide not to do anything about it.”

Alston wants to know why that is. However, the Scottish leg of his UK tour, before he gives his verdict on how the UK government is handling poverty, was dominated by another big question: should poverty essentially be made illegal?

Alston has campaigned for that approach for decades, so was heartened to meet the Scottish first minister, Nicola Sturgeon, who plans to make adequate housing, food and welfare a legal human right in Scotland. That would mark a dramatic split from the UK government, which in 1976 signed a UN treaty agreeing to protect economic and social rights, but has proved hostile to enshrining it in law.

Supporters of the idea argue that if breaches of economic and social rights were illegal the balance in society would change. Every branch of government would consider more carefully how it shared resources, and would ensure basic needs were always met, they argue. It already happens in Germany and Sweden.

“When you see how austerity has panned out in this country and you see people in crisis far more often, that for me is a fundamental human rights issue,” said Judith Robertson, chair of the Scottish Human Rights Commission, who is backing a change in the law. “At this moment in the UK we have lost the idea that all human beings are equal and should be treated with dignity and respect.”

Alex Thornburn, a disabled man who has lived in poverty, told Alston at a meeting in Edinburgh that austerity policies “have sanctioned, stigmatised and de-humanised millions”. Extending human rights protections to welfare could change that, its advocates hope. Objectors say it could give rise to costly new obligations, which would require big changes to public finances and that it would give sovereignty over key policy issues to an international body.

Even if Scotland made the change, it might not relieve the deep, ingrained issues many are facing. .

The Citizens Advice Bureau provided Alston with unpublished figures suggesting 21% of 2,700 people who responded to an unweighted open survey had gone a whole day without eating and 40% admitted running out of food.

Bill Scott, the policy director for Inclusion Scotland, a group for disabled people, told him about a woman who had chronic physical and mental health problems who said she had sex for money after her benefit was stopped following a work capability assessment. She hadn’t eaten for nearly a week but was deeply ashamed. “She couldn’t live with herself,” he said.

While Alston met Sturgeon, Karen Reid, 35, a single mother of four in the deprived Pilton neighbourhood - close to affluent Stockbridge and the elite Fettes College public school - told the Guardian how she last worked nine years ago, struggled with depression and once drank so heavily she suffered permanent nerve damage to her hands and feet. Her disability allowance has been stopped, costing her family £600 a month.

“Things are going wrong and they are getting worse,” she said.

Even if economic and social rights were enshrined in Scottish law, Scots would still be unable to challenge infringements involving the looming rollout of universal credit because it is a UK-wide policy. Holyrood is only in charge of 15% of welfare spending in Scotland and has not been able to mitigate the majority of cuts. UK-wide welfare cuts will have cost Scots £3.7bn, by 2020/21, the Holyrood administration reckons.

Aileen Campbell, the Scottish government communities secretary, said she was worried about the universal credits programme and feared it would deepen poverty unless Holyrood spent millions to offset the effects.

“We have asked [Westminster] to halt it,” she said. “Don’t roll it out when it is a fragile, crumbling system that is not going to work.”

Scotland has already started takings steps towards treating poverty differently, but many activists remain frustrated that the Holyrood government is not going fast or far enough.

An act passed earlier this year recognised social security as a human right and attempted to address the hostile environment faced by welfare recipients. In Scotland universal credit payments can now be split to protect women’s financial autonomy, the private sector will not be allowed to carry out disability assessments and there will be no security guards in the new social security agency offices.

Peter Kelly, of the Poverty Alliance, believes the Scottish government is serious. “Using the language of human rights is really important and we don’t think it’s just warm words,” he said.

Alston is in Belfast on Saturday before finishing his tour in Essex and London. He will announce the conclusions of his investigation at a press conference on Friday.

Report: "American Dream is rapidly becoming American Illusion," warns UN rights expert on poverty
The United States, one of the world’s richest nations and the “land of opportunity”, is fast becoming a champion of inequality, according to the United...
Blog: 'Good news' claiming 'falling global poverty' isn't news at all
Is poverty really on the decline across the world, as widely reported by the World Bank and United Nations? This ‘good news’ narrative is far from the...
Report: Towards a universal basic income for all humanity
A truly universal and unconditional basic income is ultimately feasible within each nation, coordinated under the auspices of the United Nations. Yet this...
Article: Connecting the dots: Human rights, inequality and poverty
We can rapidly realise the human rights of the world’s poor through global institutional reforms that reduce inequality and share the planet's natural...
Printer-friendly version