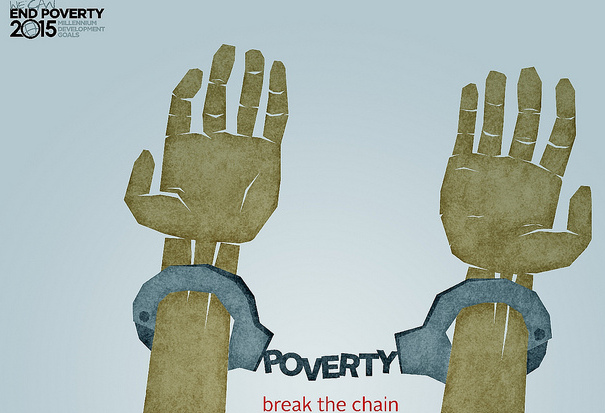 By removing all discussions about power from their agenda, the SDGs reinforce the status quo of socio-political relations, writes Katerina Gladkova for the Transnational Institute.

One might recollect the numerous attempts to scrutinise the Sustainable Development Goals (SDGs) when they were first rolled out in September 2015. They were extolled as socially inclusive and transformational; they were subject to scathing criticism; their revolutionary nature was questioned and probed. Since then the dust has settled, cementing a predominantly positive view of the global goals. The two-year anniversary affords an opportunity to reflect on the progress of the SDGs thus far, examine the future trajectory of global development, and test the unquestioned optimism of the SDGs.

The SDGs are the main reference points for global development experts. Along with 169 targets and 230 indicators, they have been embraced by all UN member countries in their policy-making agenda as an ambition to reshape the world by 2030. Their predecessor, the Millennium Development Goals (MDGs), pale in comparison to the SDGs. The latter incorporates such pressing challenges as climate change, gender equality, and urban development in a kaleidoscope of issues to be addressed. However, the true ethos of the SDGs slips through the cracks of the global buzz and is usurped by empowering messages expressed in the goals’ headlines. Consequently, the direction in which the SDGs are steering global development reinforces and propagates the hegemony of neoliberalism – the ideology of market fundamentalism which is at the root of challenges the goals are designed to solve in the first place. This article attempts to analyse various dimensions of the SDGs and the agenda behind them.

Governance of the SDGs

A seemingly insurmountable task – managing the implementation of the goals – has been preemptively explained in Sustainable Development Goal 17, which aims to “strengthen the means of implementation and revitalize the Global Partnership for Sustainable Development”. This goal envisions an all-hands-on-deck approach, with multi-stakeholder partnerships established across several sectors. Such partnerships facilitate “collaboration between government, business (and other private sector actors), civil society and/or UN and other multilateral agencies to address development challenges”. This innocuous and ostensibly democratic initiative urges businesses to the fore of development; the SDG on Water and Sanitation is a prime example of a business-led agenda. The potential consequences of this goal have been outlined in a letter by the Global Water Justice Movement to the UN. The letter raises concerns about the panel convened by the World Bank to implement the goal, as well as private financing to meet the goal’s targets. It decries the lack of accountability of private sector actors in contrast to the public sector: private developers do not bear legal responsibility for failing to offer sanitation and water systems services. The Global Water Justice Movement also points out that while the World Bank previously concluded that private participation is “inherently limited in scope for financing urban infrastructure for the wide array of non-commercial infrastructure services cities need... Local governments need good sources of public finance to fund those services,” it nevertheless persists in enforcing the same old model.

Governance of the SDGs follows the path created by the Global Redesign Initiative that was proposed by the World Economic Forum (WEF) in Davos in 2012. As explained by Harris Gleckman, Senior Fellow at the University of Massachusetts in Boston, “the initiative is the most coherent representation of a post-nation state governance system. The main premise is that multilateralism should be replaced by multistakeholderism, which for the WEF is primarily corporate-centered”. The Global Redesign Initiative has set forth an agenda to transform the UN into a public-private partnership, with institutions promoting market values influencing formal policy advice and financial contributions into the domain of global governance on par with states. This trend comes with a number of pitfalls, notes Fiona Dove, Director of the Transnational Institute: “It is worrying because you get people with a very particular sense of what constitutes success responsible for whether or not SDGs are successful. Secondly, the influence of the UN is being undermined. <…> With businesses in the driving seat of the process, there is a reason to be concerned. They are trying to dress it up as something democratic which it is not.”

Therefore, governance of the SDGs is a window-dressing exercise in democracy. The multistakeholder model dilutes boundaries of accountability and is not representative of the needs of the many; on the contrary, it serves the interests of the privileged minority advocating for the neoliberal world order.

Financing of the SDGs

In the case of the MDGs, aid funds and debt relief were the primary funding instruments. The SDGs, with their highfalutin outreach and towering ambition, require an estimated $3 trillion a year for their implementation. To meet this challenge, their enactors decided to emulate public-private governance partnerships and apply them to the financing of the SDGs. Consequently, the goals have become an enticing magnet for private finance. The architects behind the funding model have confirmed their intention to catalyse private investment: “A significant share – likely more than 50 per cent – of this financing can and should be mobilised by the private sector”. Moreover, they believe that governments should reorganise existing policy frameworks to attract private investments. The trend of turning away from public-sector financing did not emerge only with the SDGs: it is estimated that financing from development finance institutions (DFIs) focusing on the private sector has grown from US$10 billion in 2000 to almost US$70 billion in 2014. This seismic shift has profound consequences on the implementation of the SDGs and the redesign of the development industry.

It is worth examining what private finance primarily focuses on and the implications for development. It has been concluded that private-sector financing mostly revolves around “large-scale projects in mining, energy, transport, water and communications”. Moreover, the World Bank Group prioritised investments in the financial sector over other forms of investments, making up half of all investments, which is 50 per cent more than investments in the health sector and three times more than the loans provided for education.

Consequences of this regressive trend are reflected in the review of projects performed by the World Bank’s private sector arm, the International Finance Corporation (IFC), between 2000 and 2010. It found that only 13 per cent of projects had benefited the poor.

Not only does private finance in its current shape and form have little impact on development, it can also wreak havoc on local communities. Investigations carried out by Inclusive Development International have demonstrated the link between the IFC’s investments and forced evictions, the economic displacement of tens of thousands of people, environmental pollution, child and combat labour, land grabs, and even the killing of activists.

Therefore, further checks and balances are required for the private sector’s financing of the SDGs. Failing to do so will encourage opportunistic profit accumulation disguised as development, at the expense of those who need it most.

Indicators have been hailed as a silver bullet for monitoring compliance with the ideals espoused by the SDGs. In theory, 230 of these indicators should capture the specifics of measuring each goal’s performance. However, it has been noted that the proposed framework is flawed in terms of country coverage, methodologies, and updates. If these criteria are applied, only 39 indicators might be viable for all three standards.

Furthermore, the SDGs indicators encapsulate the neoliberal world order so clearly visible in the governance and financing components discussed above. As such, to reduce inequality within and among countries, goal 10 refers to the neoliberal playbook. It suggests that reallocation of resources through trade will create a level playing field for the least developed countries, and includes trade liberalisation measures in one of its targets: “Implement the principle of special and differential treatment for developing countries, in particular least developed countries, in accordance with World Trade Organization agreements”. This target is in tune with another trade-promoting mechanism outlined in goal 17 on revitalising global partnerships for sustainable development which aims to increase exports from developing countries (Target 17.11). Neither of these measures addresses the asymmetries within global economic governance whereby developing countries are silenced by the more powerful Global North.

Not only do the indicators fail to reflect the legal and institutional reforms that are needed for long-term sustainable change, they also erect barriers for this change to materialise. Global Policy Watch documented the manner in which calls for structural change have been stymied or reversed during negotiations. For instance, under Target 10.5, to improve the regulation and monitoring of global financial markets, the proposed indicator advocated for the adoption of a global financial transaction tax (Tobin tax). The Tobin tax applies to all payments converted from one currency to another in order to stabilise the movement of funds between foreign currency exchanges. In theory, the tax should generate revenue for governments and safeguard financial stability. Instead, the indicator’s premise has been altered to Financial Soundness Indicators, which were developed by the International Monitory Fund (IMF).

Another illustration of how the SDGs indicators are skewed in favour of corporate power is the elimination of tax paid by multi‐national corporations to host countries. This indicator was designed for Target 17.3 – to mobilise additional financial resources for developing countries – but was excluded from the final framework.

Consequently, the dynamics exhibited in the governance and financing of the SDGs, as well as the indicators, highlight the view that international development has been co-opted by neoliberal economics. It signifies a fundamental restructuring of the development mechanisms and the power dynamics within them. As the latter are in favour of private and corporate actors, development becomes a one-way street with little space to accommodate democracy, accountability, and justice. By removing all discussions about power from their agenda, the SDGs reinforce the status quo of socio-political relations. Two years since their official inception, one might ask, do the SDGs transform the world? They certainly do. The question is, who benefits from this kind of transformation?

Katerina Gladkova graduated with a master’s degree in International Development from the University of Amsterdam in 2016. In her field work research she delved into governance and climate change. Presently Katerina's interests are in topics of ecological and environmental justice.

Article: Reclaiming the UN's radical vision of global economic justice
The Universal Declaration of Human Rights is one of the most translated and celebrated documents in the world, marking its 70th anniversary this year. But...
Article: “We have to redefine policies for sustainable development”
Three years after its adoption, most governments have failed to turn the proclaimed transformational vision of the 2030 Agenda into real policies. But...
Article: Squeezing the state: Corporate influence over tax policy and the repercussions for national and global inequality
Reducing inequality is one of the central pledges of the SDGs, appearing as a stand-alone goal (SDG 10) and as a cross-cutting commitment to “leave no one...
Blog: 69 of the richest 100 entities on the planet are corporations, not governments, figures show
Top corporations continue to accrue revenues far in excess of most governments, figures compiled by Global Justice Now show. Comparing 2017 revenues, 69...
Printer-friendly version