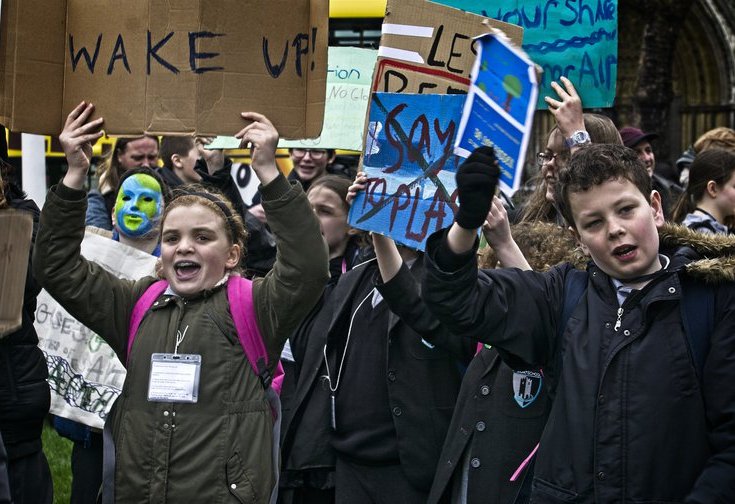 While Greta Thunberg has mostly targeted governments and multilateral bodies for their failure to tackle the climate crisis, the global Climate Strike Movement her Friday protests have inspired may also have inadvertently exposed the shortcomings of international non-governmental organisations (INGOs). With the kind of global reach and popular mobilisation of which most INGOs can only dream, the climate strikes have succeeded in catapulting the climate crisis to the top of the political and media agendas.

In the process, this movement has exposed the lack of critical interrogation by INGOs of government and corporate inaction to reduce global warming, and shed light on the growing inertia of an INGO sector that trades in incremental change rather than systemic political and economic transformation. So what could INGOs learn from Thunberg and the climate movement’s tactics? Here are four key points.

The most recent week of climate actions from 20-27 September 2019 saw a record 7.6 million people take to the streets in what was the biggest climate mobilisation in history, with more than 6,000 actions recorded in 185 countries. The mobilisation on 20 September was a ‘general strike’ which urged adults in all walks of life to follow the lead of young people. This resulted in over 70 trade unions, 3,000 businesses and 800 civil society organisations supporting actions in the global North and South.

Other popular mobilisations prior to September almost certainly contributed to the unexpected success of the Green parties in the European Union parliamentary elections in May 2019, suggesting that heightened awareness of climate change is beginning to influence political behaviour. Before the strikes, the world seemed locked into a state of cognitive dissonance whereby it recognised the gravity of the climate crisis but was determined to carry on with ‘business as usual.’ But the size and dynamism of the climate protests is making that untenable.

In part, that’s because the generation that is leading the climate movement is “the first for whom climate disruption on a planetary scale is not a future threat, but a lived reality,” as Naomi Klein puts it in her new book On Fire: The Burning Case for a Green New Deal. Recent research by Barnardo’s and Girlguiding shows that the climate crisis is one of the main concerns for young people and a major source of anxiety.

Research has also shown that young people’s engagement in social actions can reduce anxiety and improve their well-being. Action projects represent a profound learning experience through which people can develop key skills, capabilities, attitudes and dispositions that strengthen their engagement with the issues that affect their lives.

Another major factor in the global spread of climate activism is Thunberg’s direct communications style and her refusal to content herself with the ear of politicians and business leaders. She speaks with clarity, directness and truth. In her address to billionaire entrepreneurs at the World Economic Forum in Davos, Switzerland, for example, she said: “I don’t want you to be hopeful. I want you to panic. I want you to feel the fear I feel every day. And then I want you to act.”

Her speech to the United Nations Climate Action Summit on 23 September 2019 was more like a rebuke to world leaders:

“People are suffering. People are dying. Entire ecosystems are collapsing. We are in the beginning of a mass extinction, and all you can talk about is money and fairy tales of eternal economic growth. How dare you!”

Her reference to “fairy tales of eternal economic growth” clearly alluded to the broken neoliberal economic model that precipitated the 2008 global financial crisis. Thunberg recognises the threat posed by a deregulated carbon-based economy to the Intergovernmental Panel on Climate Change’s (IPCC) recommendation to limit global warming to 1.5°C. Her speeches regularly exhort her audiences to ‘listen to the science’ and call out politicians for a lack of urgency in their responses.

Thunberg was similarly unsparing in her remarks to a United States Congressional climate crisis task force when she said “Please save your praise. We don’t want it. Don’t invite us here to just tell us how inspiring we are without actually doing anything about it because it doesn’t lead to anything”. In remarks meant for Congress as a whole she added: “I know you are trying but just not hard enough. Sorry.”

Thunberg’s reproaching of politicians and climate change deniers has resulted in scabrous abuse by internet trolls and feeble efforts to satirise her appearance, delivery and content. It’s worth re-stating that such trolls, mostly white men, are taking to the internet to attack a 16 year-old school girl who has given a voice to millions of young people across the world and inspired them to action.

These risible efforts to undermine the climate strike movement nonetheless remind us of the power of carbon-based industries and their political supporters to resist all forms of regulation of dirty, extractivist corporations, and to attack high profile critics like Thunberg aggressively.

It is worth contrasting the global response to Thunberg’s terse dismissal of political action on climate to date, and her very direct exhortation to act and act now, with the timid reformism and diminishing returns of the INGO sector which trades in ‘capacity development,’ ‘poverty eradication’ and ‘elite advocacy.’ The writer and activist Arundhati Roy regards the explosion of new NGOs in the wake of neoliberalism as an effort to contain radical energy for change by directing it into firefighting austerity. She suggests that:

“Armed with their billions, these NGOs have waded into the world, turning potential revolutionaries into salaried activists, funding artists, intellectuals and filmmakers, gently luring them away from radical confrontation.”

CIVICUS, a global alliance of civil society groups, wrote an open letter in 2014 to “fellow activists across the globe” in which it offered a damning verdict on the NGO movement and its failure to address the “glaring inequality that sits at the heart of the new world order.” It said:

“We are the poor cousins of the global jet set. We exist to challenge the status quo, but we trade in incremental change. Our actions are clearly not sufficient to address the mounting anger and demand for systemic political and economic transformation that we see in cities and communities around the world every day.”

The letter goes on to characterise a sector which lacks agility, flexibility and the capacity to support transformational change. It says of NGOs that “much of our energy is trapped in the internal bureaucracy and the comfort of our brands and organisations.” This is a view endorsed by Tanja Kleibl and Ronaldo Munck in their assessment of the NGO sector in Ireland in the wake of the 2018 safeguarding scandal in Oxfam and Goal.

There is “a shared discourse across the government, NGO and academic sectors which does not really encourage critical enquiry,” they argue, going on to invite an “open debate on whether NGOs are part of the solution or, rather, part of the problem. This debate is too important to be left to the NGOs alone.”

Part of such a process of honest self-appraisal by the INGO sector should involve a greater engagement with the lessons of successful movements like the climate strikes, but not just to feed their own campaigns. Inspired by the radical pedagogy of Paulo Freire, methodologies of global learning provide the values, skills, knowledge and understanding needed to understand the complex issues which underpin climate injustice, poverty and social exclusion, but also to equip learners with the capacity to act for change.

The Climate Strike movement is global learning in action, because it combines analysis, debate and active citizenship in ways that build and sustain public engagement. The heightened public awareness of climate change that is being manifested in Extinction Rebellion and the strikes should encourage INGOs to invest more in global learning like this, both as a form of capacity building and as a means of critical engagement with government and the business sector.

As Civicus suggests, this should be part of setting “the path for a radical re-haul of civil society in order to get back to our roots and organise to build people’s power and define a future based on local initiatives and organising.” The alternative is a growing irrelevance of INGOs to the lives of people that should be their natural constituency: those on the frontline of poverty, austerity and climate change in the global North and South.

Learning lessons from the climate strike movement could help the INGO sector to approach the process of development on the basis of a stronger and more sustainable foundation for change that is driven by critical enquiry rather than fundraising and the agendas of donors.

Report: The intersection of politics and spirituality in addressing the climate crisis
The following interview with STWR’s founder, Mohammed Sofiane Mesbahi, examines both the contemporary political and profounder spiritual implications of...
News: Global Climate Change rallies push for urgent action
In London, STWR joined over 10,000 campaigners who braved the wind and December downpours to walk from the Houses of Parliament to the US embassy.
News: 'Unprecedented' changes to world economy and society required to avoid climate chaos, UN report warns
Avoiding global climate chaos will require a major transformation of society and the world economy that is “unprecedented in scale”, the United Nations...
News: 'Climate apartheid' to push 120 million into poverty by 2030, UN says
The world is facing a "climate apartheid" between the rich who can protect themselves and the poor who are left behind, the UN has warned in a new report...
Printer-friendly version