Climate collapse is not inevitable but ‘great leap’ needed 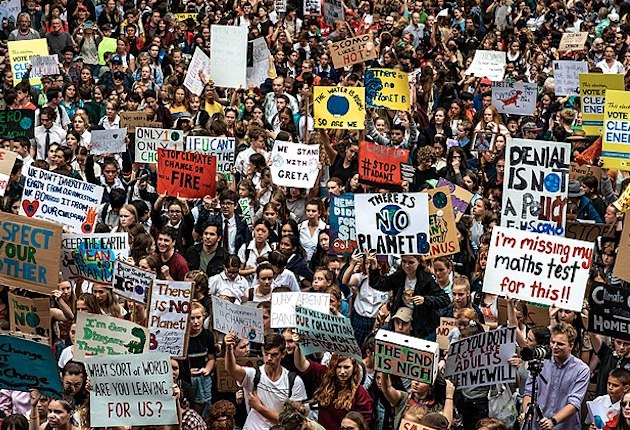 To bring about a 'Great Leap' scenario, it is necessary to address the fundamental inequalities that are the root cause of the ecological crisis, writes Paul Virgo for IPS news.

In 1972 the Club of Rome alerted the world to the harm human economic systems were doing to the health of our planet in its seminal, best-selling report, The Limits to Growth. With the devastating impacts of the climate crisis hitting home harder than ever, especially in the Global South, that warning about the dangers of exponential economic growth has been fully vindicated.

The club, an international network of scientists, economic experts and former heads of State and government, is marking the 50th anniversary of that landmark work with a new contribution that builds on ‘Limits’ and the dozens of other reports that it has released over the last half century to consolidate the case for an overhaul of the prevailing economic paradigm.

‘Earth for All: A Survival Guide for Humanity’, which is coming out late in September, warns that if the world continues with the economic policies of the last 40 years, the rich will get richer while the poor fall farther behind, creating extreme inequalities and growing social tensions within and between countries.

In this ‘Too Little, Too Late Scenario’, political division and lack of trust will make it increasingly difficult to address climate and ecological risks, with regional societal collapse, driven by rising social tensions, food insecurity and environmental degradation, increasingly likely.

The good news is that it doesn’t have to be like this.

If humanity snaps out of its collective denial, it can move to a ‘Great Leap’ scenario in which global temperatures are stabilized at below 2°C above pre-industrial levels.

To bring this about it is necessary to address the fundamental inequalities that are the root cause of the ecological crisis by: ending poverty through reform of the international financial system; addressing gross inequality by ensuring that the wealthiest 10% take less than 40% of national incomes; empowering women to achieve full gender equity by 2050; transforming the food system to provide healthy diets for people and planet; and transitioning to clean energy to reach net zero emissions by 2050.

“With bold action now a large population can thrive on a livable planet,” Owen Gaffney, one of the six authors of the new report, told IPS.

“We argue that we need five transformations in parallel at speed with the biggest effort this decade on poverty, inequality, food, energy and gender equity”.

“This is the minimum. This does not lead to some utopia, but this leads to societies that are functional enough to deal with the scale of the crises we know are coming.”

Gaffney, a sustainability analyst at the Stockholm Resilience Centre, said that it is necessary to break away from “a system that will create the first trillionaire this decade” and distribute wealth more fairly to create a system that benefits the majority in the long run.

“High wealth inequality has a destabilizing influence in societies,” he said.

“It erodes social cohesion. Compare Sweden to the United States. In the US there has emerged an ‘elite versus the rest’ worldview. This, compounded by race and religious divisions, has contributed to an increasingly dysfunctional society.

Earth for All, which is the result of a two-year research project, goes on to give 15 policy recommendations with the greatest potential to accelerate these turnarounds.

It also calls for the creation of a novel financial innovation, the Citizen’s Fund, which would distribute the wealth of the global commons to all people as a Universal Basic Dividend, in order to tackle inequality, reduce greenhouse gas emissions, and provide a safety net for the most vulnerable through economic shocks.

Furthermore, the book tackles the fierce debate between supporters of ‘degrowth’ and advocates of ‘green growth’.

“This does not necessarily need to be the case. An energy transformation to clean energy will cause economic growth in the clean energy sector and a contraction of the fossil fuel sector.”

“So, it depends what is growing. If we have growth in circular economies and regenerative economies, this is good.”

“If we continue growing the linear ‘take, make, break, waste’ model then we don’t have a long future on Earth”.

Although the solutions proposed in the book are largely macro-economic ones that can only be implemented by governments, the book is also a statement against climate doomism and a call to action for everyone.

Gaffney points to the impact social movements like Fridays for Future and Extinction Rebellion are having and to a survey done for Earth4All with Ipsos MORI of G20 countries which suggests that 74% of people in G20 countries want economic systems to change.

He hopes that we are reaching a positive “social tipping point” in which these new ideas take hold and embed in the political sphere rapidly.

Remarkably, one of the authors of the report is Norwegian climate expert Jorgen Randers, who was also among the co-authors of The Limits to Growth.

“We are standing on a cliff edge,” Randers said. “In the next 50 years, the current economic system will drive up social tensions and drive down wellbeing.”

“We can already see how inequality is destabilising people and the planet.”

“Unless there is truly extraordinary action to redistribute wealth, things will get significantly worse. We are already sowing the seeds for regional collapse.”

“Societies are creating vicious cycles where rising social tensions, which are exacerbated by climate breakdown, will continue to lead to a decline in trust.”

“This risks an explosive combination of extreme political destabilisation and economic stagnation at a time when we must do everything we can to avoid climate catastrophes.”

Blog: The transformative potential of human rights economics
Human rights advocates could be more active in using human rights tools to transform economic thought and practice, particularly in holding private and...
Blog: Achieving earth for all
50 years ago, the report ‘The Limits of Growth’ was published — and its scenarios turned out surprisingly accurate. But we can still change course, writes...
Blog: Coming together to save earth could be the best project ever undertaken by the human species
Change will come, and can only come from committed people mobilizing in common cause as a powerful social movement, writes David Korten.
News: 'We won't stop': Climate scientists vow to keep fighting after global mobilisation
After wrapping up a worldwide civil disobedience campaign to call for a "climate revolution," scientists have pledged to keep fighting for the ambitious...
News: ‘Earth Overshoot Day’ comes earlier every year
From today onwards, humanity is living on credit. Every year, Overshoot Day – the date by which humanity has consumed all the resources that Earth can...
Printer-friendly version