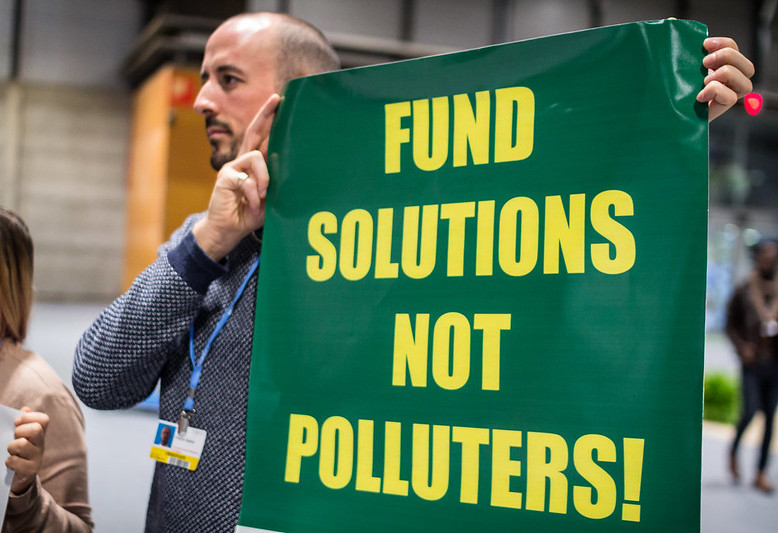 The successful battle against climate change – which has triggered a rash of natural disasters, including floods, droughts and rising sea levels— will be predicated largely on the availability of financing.

The World Bank last year pledged $200 billion to finance the fight against climate change, between 2021 and 2025.

In October, the US offered $1.21 billion to support Blue Economy—an offer described as a proverbial drop in the world’s besieged oceans.

Last week, at the Conference of Parties (COP25) climate change conference in Madrid, he said: “We should ensure that at least $100 billion dollars a year, is available to developing countries for mitigation and adaptation taking into account their legitimate expectations to have the resources necessary to build resilience and for disaster response and recovery.”

Guterres said there was a need to replenish the Green Climate Fund (GCF) to meet the commitment to mobilize the estimated $100 billion per year for climate action.

But at the GCF Pledging Conference in Paris last October, rich nations pledged only $9.8 billion to the Fund leaving a yawning gap.

But not surprisingly, climate financing was one of the key issues at the two week long COP25 meeting which concludes December 13.

A coalition of over 150 non-governmental organizations ( NGOs) and climate change activists has called on developed countries “to stop using bullying tactics to block funding for climate disasters”.

“But developed countries – those most responsible for the climate crisis – including the UK, US, EU, Australia and Japan, have spent years blocking concrete progress to create funding and debt relief for countries in the global South most affected by rising global temperatures”, said the coalition in its letter*.

Tim Jones, Head of Policy, Jubilee Debt Campaign and a signatory to the letter, told IPS that a new fund has to be agreed; otherwise countries suffering from the impacts of climate change will be pushed into taking on ever higher unjust debts.

“There are multiple sources of finance from taxes on financial transactions to international air travel. All developing countries hit be disasters should get moratoriums on debt payments so vital funds stay in the country for rebuilding in the immediate aftermath,” he pointed out.

For example, he said, one climate insurance scheme in the Caribbean has received $293 million in premium payments and grants from donors since it began in 2007 but has paid out just $131 million in claims.

In contrast, $105 million from the scheme has gone to private insurance companies as profit, he added.

The open letter from the NGO coalition says: “The under-signed organisations, recognizing that the UN finds that climate disasters are now occurring at the rate of one per week and are set to cost at least $300 billion per year by 2030, call for an end to the stalemate in negotiations and the creation of a comprehensive financing facility, including debt relief, for developing countries experiencing such disasters.

“Without finance to help countries cope with climate-induced loss and damage, the most vulnerable parts of the world will sink deeper into debt and poverty every time they are hit by climate disasters they did not cause.”

The Warsaw International Mechanism for Loss and Damage (WIM), which is being reviewed at COP25, was established in 2013 to support vulnerable countries already experiencing extreme and slow onset climate disasters, such as flooding, droughts and rising sea levels.

Six years on, the WIM has failed in its main purpose – to propose concrete, rights-based financing solutions for communities being hit by climate disasters, the letter adds.

Cameron Diver, Deputy Director-General, the Pacific Community (SPC), who is at the COP25 in Madrid, told IPS sea-level rise is already underway.

“We have seen its effects in the islands of the Blue Pacific continent, as we have in countries and communities around the globe. If we truly want to limit the impact on our populations, what we need, to paraphrase Secretary-General Antonio Guterres at the opening of COP 25, is ambition in mitigation, ambition in adaptation and ambition in finance”.

He said ambition in mitigation is to ensure that “we limit levels of greenhouse gas emissions to levels compatible with the Paris Agreement and that contribute to the transformative approach necessary for our economies and societies to make the low carbon transition.”

Without enhanced mitigation actions, global warming will continue, the climate emergency will become ever more dire and our communities will suffer the consequences, he warned.

“This must be accompanied in equal measure by increased ambition in adaptation, so that we accompany the most vulnerable countries and communities in their efforts to adapt to a changing environment and, for coastal communities, to increased salinization of soils and groundwater, to ocean acidification and coral bleaching that destroys coastal ecosystems and livelihoods, to an ocean that encroaches on sometimes already limited land masses,” he noted.

Without adaptation and mitigation working hand in hand, we will not get the full benefit of concentrated climate action to stem sea-level rise and its effects.

“And the achieve all of this, we need ambition in finance”, said Diver.

“We need to unlock and increase existing international and national climate funds to transform promises on the paper into outcomes in the field and we need public and private finance to accompany the low carbon transition, invest in the green and blue economies, divest investment portfolios of non-Paris Agreement compatible assets and provide the level of funding required to meet global climate ambition,” he argued.

Harjeet Singh, ActionAid’s global lead on climate change, told IPS: “Concrete financing solutions are urgently needed to repair the devastation already being caused by climate change and to prepare for an uncertain future.”

“Our analysis shows that ending state subsidies for fossil fuels and a progressive tax on the oil and gas industry would raise the billions needed to adapt to and repair the harmful impacts of global warming. These solutions put the onus on those responsible for the climate crisis and protect the rights of those most at risk,” he added.

The report examined the current options for market, state and ‘innovative’ funding mechanisms available to cover the soaring costs of loss and damage related to rising global temperatures, reviewing their effectiveness against key human rights principles.

Singh said most market solutions put the financial burden back on developing countries, who are least responsible for causing the climate crisis. These mechanisms also fail against transparency and accountability measures and do not involve the people most at risk in decision making to protect their rights.

On the GCF, he said: “We expect rich countries to at least double their previous commitments to the Green Climate Fund, recognising that this remains inadequate to address the full scale of the crisis.

“To effectively tackle the climate crisis, we need to see a massive shift in financial flows, far greater than countries have pledged to the fund so far. Helping the world’s most marginalised people in developing countries tackle climate impacts requires grant-based public finance, not loans or private investments.”

*The NGO letter, which was sent to environment ministers, heads of delegation and COP25 President Carolina Schmidt, can be read here: https://actionaid.org/news/2019/more-150-ngos-sign-open-letter-calling-loss-and-damage-fund-debt-relief

The writer can be contacted at thalifdeen@ips.org

Report: US and EU owe more than half the cost of repairing future damage caused by climate disasters
New analysis sets out how much responsibility the wealthy countries behind the climate crisis must take for the devastating impact that rising global...
News: 'Climate apartheid' to push 120 million into poverty by 2030, UN says
The world is facing a "climate apartheid" between the rich who can protect themselves and the poor who are left behind, the UN has warned in a new report...
Report: The intersection of politics and spirituality in addressing the climate crisis
The following interview with STWR’s founder, Mohammed Sofiane Mesbahi, examines both the contemporary political and profounder spiritual implications of...
News: Step up climate action or face catastrophe, says UN report
Global emissions need to be more than halved if we are to save the planet, world's top scientists agree in a new United Nations report.
Printer-friendly version