COP fails to rise to the challenge of protecting biodiversity 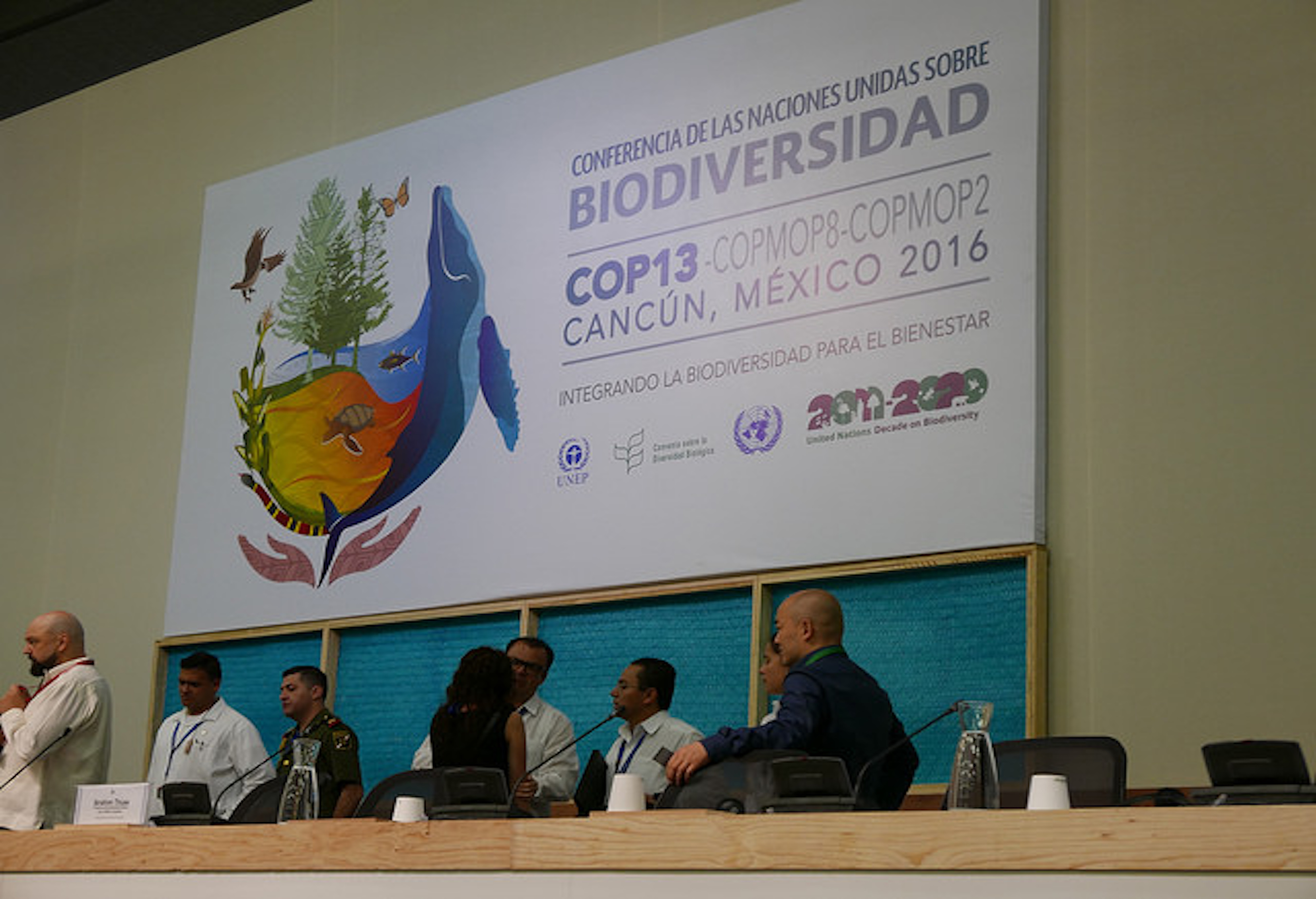 The latest talks of the Convention on Biological Diversity in Cancun, Mexico, failed to address the systemic factors that threaten biodiversity, or the real solutions - such as community forest governance, agroecology and the strengthening of collective rights. A report on CBD COP13 from Friends of the Earth International.

The central theme of COP 13 was the mainstreaming of biodiversity in all sectors, in particular agriculture, forestry, fisheries and tourism. It is a good idea to make sure these sectors take biodiversity into account when making decisions that can impact biodiversity. But unfortunately, the final decisions fail to impose action that would force the before mentioned sectors to act within planetary boundaries. On the contrary, it seems that their interests are represented within the text on mainstreaming, and there is no accounting of their responsibility in the creation of this crisis.

For example in the agricultural sector we can see that there continues to be a call for the promotion of the green revolution, specifically for an even bigger investment and research for new technologies. It is precisely these technologies, such as agrochemicals and GMOs, that wreak havoc on biodiversity. Calling these technologies "sustainable" does not make them so.

Another example is the tourism sector, which continues to promote growth, claiming that it is an ecological activity. However, the complaints from indigenous peoples are plenty, demonstrating how (eco)tourism destroys the natural areas in which they live, and deprives them of their rights to inhabit their territories, of which they are the historical guardians.

Indigenous peoples and local communities were under a lot of pressure on other fronts as well. The “Free” aspect of the principle of free, prior and informed consent (FPIC), was only recognized halfheartedly, and that after very tough negotiations. Many countries also wanted to submit customary laws, community protocols, practices and customary decision-making processes to national regulation, thereby eliminating the sovereignty of peoples. Indigenous Peoples themselves were not heard in that decision making process. It was only after joint protests by indigenous peoples and civil society, including Friends of the Earth, that their basic right to sovereignty was somehow restored.

The precautionary principle, a key element in UN environmental conventions, came under severe attack. Countries in favor of GM are prioritizing corporate profits and trade interests over environmental safety and human health. The precautionary principle and any risk assessments are like a red flag to these countries, one they will attack at all costs. This resulted in the loss of the mechanisms to develop a risk assessment of GMOs under the Cartagena Protocol; the failure to stop digital biopiracy by not regulating digital genetic sequences; and the closing down of the expert group which was to deal with the risks of synthetic biology.

Regarding gene drives, a brand new genetic engineering technology capable of changing characteristics of entire species or eradicating them altogether. Most countries recognized the threats and many asked for a moratorium. A moratorium was not approved, and calls for action were blocked.

All this takes place in a context where the private sector has more and more power and influence in the CBD. Almost a third of the COP delegates represent the business sector, while countless other business representatives  are part of official delegations. The behaviour of many countries shows that they are under strong corporate influence, defending economic interests over biodiversity and ecosystems, and over the rights of those who live in the forests and other ecosystems.

One aspect of corporate advancement is the financialization of nature. In previous events, side events, and in the corridors, the concepts of payments for environmental services, biodiversity offsetting, and other forms of economic valuation of nature were buzzwords. In many cases they were presented as the only viable solutions to environmental problems. After tough battles, it was kept out of the official texts, but the impetus for this trend is clear.

The level of human decency at COP seems to be dropping year after year. This was felt when some Friends of the Earth International delegates, amongst many other delegates, had to suffer verbal attacks after defending the interests of nature and the interests of peasants, fishermen, fisherfolk, forest dwellers, indigenous peoples and women.

In conclusion, none of the decisions of the CBD will lead us to the necessary system change to save nature. What we really need are proposals such as community forest governance, agroecology and the strengthening of collective rights. Therefore, Friends of the Earth International will continue to work locally in the 74 countries where we are based to support those who generate change, every day, in their cities and their communities.

Read the final statement of the CBD Alliance for #COP13 here

Page: The environmental crisis
Climate change and environmental pollution is only one aspect of a much wider ecological crisis that has resulted from our over-exploitation and...
Article: Climate change and the environment: an overview
The threat of climate change and global warming, fueled by relentless commercialization and excessive consumption, has turned into a fighting ground for...
Blog: Corporations running the world used to be science fiction - Now it's a reality
The power of corporations has reached a level never before seen in human history, often dwarfing the power of states. That is why civil society...
Printer-friendly version