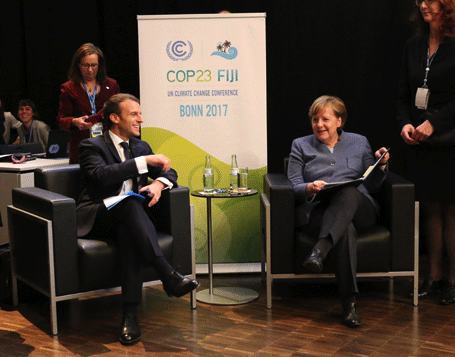 Despite a few victories, the UN’s annual climate change conference ended without achieving its goals or injecting a sense of much needed urgency.

Over 20,000 people from around the world descended on Bonn, Germany at the beginning of November for the 23rd Conference of the Parties (COP23).

Timoci Naulusala, a 12-year-old from Fiji, made a passionate call for action at the opening of the COP23, stating: “The sea is swallowing villages, eating away at shorelines, withering crops. Relocation of people…cries over lost loved ones, dying of hunger and thirst…you may think it will only affect small nations…you are wrong.”

French President Emmanuel Macron echoed similar sentiments, noting that the effects of climate change have multiplied and are becoming increasingly intense. “The point of no return has been crossed,” he said.

The conference set out to develop a rule book for implementing the landmark Paris Agreement. Though the deadline for its completion is next year’s COP in Poland, many noted that not enough was achieved this year.

Among the most contentious issues at COP23 was about finance. Of the 100 billion dollars that was promised each year in climate finance for developing countries by 2020, developed countries have so far only pledged a little over 10 billion.

Clare Shakya from the International Institute for Environment and Development also expressed concern to IPS that climate finance often does not reach the frontline poorest countries and people. “They get a far lower share than is their fair share,” she said.

Less than 10 percent of an already limited amount of climate finance reaches poor communities. This impacts countries such as Ethiopia where drought is drastically affecting livelihoods.

The East African nation, which needs approximately 7.5 billion dollars a year to switch to clean energy and adapt to climate change, is so far receiving between 100 million and 200 million per year.

As part of the Paris Agreement, donors must give a future estimate of how much and what kind of climate finance is going to be committed in order for countries to plan and prepare. However, developed countries pushed back on the demands, further delaying discussion and action on the issue.

“You didn’t see the developed countries coming here prepared to engage seriously on ramping up finance…parties knew there weren’t major political decisions that were going to have to be made as they were facing when they went into Paris,” Union of Concerned Scientist’s Director of Strategy and Policy Alden Meyer told IPS.

Both Meyer and Shakya expressed frustration on the lack of urgency over the discussion and implementation of the climate accord.

“It was pretty disappointing for vulnerable countries…that want to see more urgency in terms of mobilizing resources to help them in the wake of devastating hurricanes and typhoons that we have seen this year,” Meyer told IPS.

This can be seen through countries’ pledges made under the Paris Agreement which are only one-third of what is required to keep emissions under two degrees Celsius above the pre-industrial level by 2030.

Though countries agreed to examine ways to close that gap next year, the apathy at COP23 does not bode well for the next year of climate discussions.

Shakya noted that the negotiations that did happen during the conference also lacked a holistic approach as the words ‘gender’ were blocked in discussions about technology transfer while ‘finance’ was neglected in the gender action plan.

“There’s some really frustrating elements within the negotiations now that are trying to derail the connections that need to be there,” she told IPS.

As the U.S. has stepped back, even hosting a side event on “cleaner and more efficient fossil fuels” which sparked international outrage, many are now looking to both French President Macron and German Chancellor Angela Merkel to take on a leadership role on climate action.

“They both really have personal commitment to the Paris Agreement and at the moment, we are kind of short on leaders—they are our hope,” said Shakya.

In August, the U.S. announced that it will withdraw all funding to the Intergovernmental Panel on Climate Change (IPCC), a UN body tasked with researching climate change science.

Macron called on Europe and promised to fill in the gap. “I hope Europe can replace the US as a climate leader and I can tell you that France is ready for that,” he told delegates.

Merkel pledged to double climate finance to support developing countries by 2020 and made explicit pledges to help least developed countries finance adaptation in areas such as climate information systems and catastrophe risk management.

However, attendees were left disappointed when Merkel did not announce a plan to reduce Germany’s dependence on coal. Approximately 40 percent of the German power sector is reliant on coal and if such dependence continues, the Western European nation will not meet its 2020 emissions reactions targets.

In fact, the European Union (EU) will not be able to reach its goal of reducing emissions by at least 40 percent below 1990 levels by 2030 unless policies are changed and more pledges are made.

Though countries made a political commitment to ramp up negotiations, Meyer expressed concern that progress may continue to be slow, especially as Poland is hosting COP in 2018.

Poland is a heavily coal-dependent economy, with approximately 80 percent of its electricity generation coming from coal. The Climate Change Performance Index gave the Eastern European country a ranking of 40 and noted that it continues to fight climate legislation.

In an effort to move away from coal as an energy source, the United Kingdom and Canada created an international “powering past coal” alliance. Another 25 national and subnational governments joined the alliance including France, Ethiopia, Mexico, and the U.S. states of Washington and Oregon.

However, the alliance does not commit signatories to a specific phase-out date. Several big coal countries also did not join the alliance including Germany, Poland, Australia, China, and India.

Despite slow progress, COP23 did not end without small victories. Countries agreed to review progress on reducing emissions in 2018 and 2019, as well as conduct assessments on climate finance in 2018 and 2020.

“It is a really significant first step, but it is a first step only. We need to see this being the building blocks for them to be included in the process of policy development and investment,” she told IPS.

Shakya called for more transparency in climate finance and proposed that donors form a leadership group outside of formal negotiations in order to identify and collaborate on solutions to improve the quality of finance and reporting.

Meyer expressed hope that there will be further progress in meetings to happen between now and the next COP, particularly pointing to the One Planet Summit hosted by France in December which aims to bring together political leaders as well as those working in public and private finance to discuss how they can support and accelerate global efforts to fight climate change.

“There is a lot more work to do…if there is political will, there will be a pretty decent outcome. If not, we are not going to see much improvement,” he said.

Blog: Ahead of COP23 climate talks, tens of thousands march demanding end to 'era of fossil fuels'
Just days before world leaders are set to gather in Bonn, Germany for the annual United Nations Climate Change Conference (COP23), tens of thousands of...
Article: Activists condemn failure of COP23 to address interrelated crises of climate, energy & inequality
On the last day of the United Nations climate summit in Bonn, Germany, Democracy Now! get a wrap up on the proceedings from guests Dipti Bhatnagar (...
Article: Understanding COP23: On the international politics of climate change
The following article is a resource produced by members of Demand Climate Justice to provide background on the global politics of climate change and the...
Report: The intersection of politics and spirituality in addressing the climate crisis
The following interview with STWR’s founder, Mohammed Sofiane Mesbahi, examines both the contemporary political and profounder spiritual implications of...
Printer-friendly version