Doughnut economics: an economic model for the future 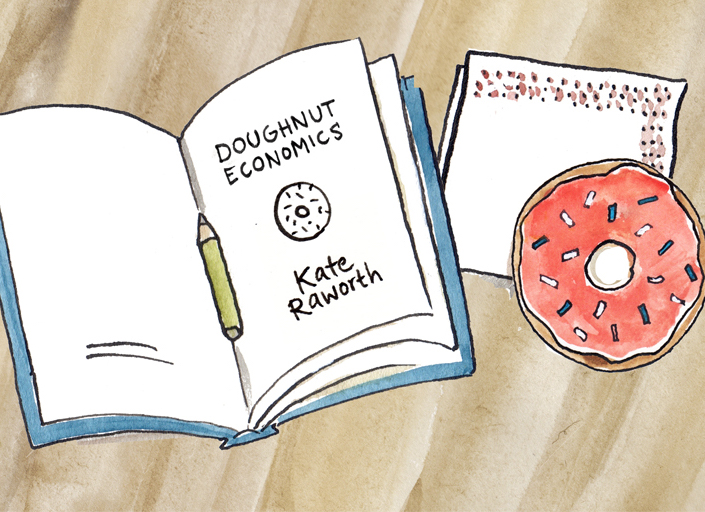 The distributive concept of the 21st century is not about redistribution, but about sharing the sources of wealth from the start. An interview with Kate Raworth, by Triodos bank.

Kate Raworth recognises that a dramatic new mindset is needed if we’re going to address the economic challenges of the 21st century. Her iconic book, Doughnut Economics: seven ways to think like a 21st-century economist, argues that our economic activity should operate in a space that’s above a social foundation, and below an ecological ceiling. What this means in practice is that essential human rights and quality of life are delivered to everyone, but within the means and resources we have available on the planet. The doughnut of Kate’s anaology is a playful metaphor for a serious and urgent challenge being faced by the world’s population. Triodos Bank caught up with Kate to ask more about her perspective on modern economics, and how we can create a system that works within the limits of her theory.

Sharing instead of redistributing

Your economic model is now six years old. Have we made any progress?

We have. I consider the Sustainable Development Goals (SDG’s) to be an essential step. They are much more ambitious than their predecessors, the Millennium Goals. They compromise the systems that sustain life on earth and are designed for all countries, not just the South. The SDG’s are a positive development, but I think we should be able to break through the ceiling of our imagination. The question is: can we design a system to improve things? That, in my opinion, should be our ambition: to develop activities that are distributive and generative from the start.

What exactly do you mean by ‘distributive by design’?

We usually talk about redistributing the wealth that is initially in the hands of a small group of people. That is the core of the 20th century model: redistribution of income afterwards, through e.g. progressive taxes and other means. This means that certain groups can keep questioning this redistribution over and over again. The distributive concept of the 21st century is about choosing to design our activities in such a way that they share the value from the start, instead of redistributing it afterwards.

Distributive by design starts with the question: who owns the wealth? The 21st century is not about redistribution but about sharing the sources of wealth from the start. And it is not just about the money, but also about land, companies, the ability to create money. What about the ownership of technology, who will own our robots? How do we treat our knowledge? Does it not make sense that innovative ideas originating from publicly funded research should be accessible to everyone?

The core of the challenge, then, is in reinventing the way we create value in our economy and share it from the start. You can do this with alternative forms of ownership of companies, like employee-owned companies or co-operations. Or you could anchor it as a target in the company’s Articles. Another way of integrating the sharing of value in the design is not to freeze them in patents but instead let them circulate freely among the commons. That way they travel through society, research communities can use them and develop them further. Another way still is to work with local currencies that connect and empower new initiatives.

The economy should not just share value. It should also be generative?

Yes. We seem to find it normal that a company focuses on realizing but one kind of value – financial profit – and in addition, keeps it for itself and its shareholder. It is very much the mentality of the 20th century: how much money is in it for me? You could describe it as an extractive economy, as over-exploitation taking away valuable resources from the community.

The 21st century, generative model has a different baseline. The question now is: how many kinds of value can I integrate in my company’s design to make sure that I can give value back to society and the environment? I keep meeting entrepreneurs, designers, urban developers, etc. who adhere to this new mentality with such vigor! As social entrepreneurs they want to create value that flows back to the community, forms of value that are easier to share. As a company, why would you strive to only reducing your negative impact on the environment when you can just as easily generate a positive impact? So instead of reducing emission of greenhouse gases, you start generating renewable energy and you share it with your surroundings. The same goes for the social domain, whereby companies actively contribute to the wellbeing of their neighbourhood or community.

What role do you see for the financial world?

That is the million-dollar question. First, we should investigate how to collect money in a 21st century way. That leads us to ethical banks, money with patience, and at first even philanthropy, to get things going. All of those are important sources for money because their values are in line with those of the companies they are supporting. Within the existing 20th century money industry we could do this through our pension funds. Could we restructure them so that they become value-driven? Can we enable people to change to such ethical pension funds? Besides that, we obviously need clear legislation. But I focus mostly on finding new forms of financing that are suited for 21st century businesses.

And that is where Triodos Bank comes in. The bank pays attention to these new kinds of entrepreneurship that are essential for the future. Triodos consciously uses money to create positive social, ecological and cultural change. It is an excellent example of a company with a lively target, aimed at distributive and generative companies whose values go way beyond the financial profit that stays within the company.

Between the markets and the commons

How would you rate the potential of our digital networks?

We underestimate their power. They enable citizens to get organized on different levels and at minimal costs. Take Wikipedia, the citizens’ encyclopedia. Or Linux, an open source operating system used by organizations all over the globe. These are tools which allow citizens to build their own networks.

At the moment, a few companies hold monopolies, like Facebook and Amazon, but it does not necessarily have to stay that way. People can be active in different networks. We can be on Facebook, but at the same time join local networks and exchange information and knowledge about our city. I foresee a big increase in open-source networks for specific cities and communities. We underestimate what these networks could mean for citizens who want to collaborate and connect.

The new possibilities to work digitally and open source are leading to a whole new generation of innovative entrepreneurs who have begun to operate on the border between the markets and the commons. Your company may be small, but if you share your ideas with the commons, you will have access to a global research team. New business models will see the light. And they are successful precisely because they are open source. We are looking at an immense quest for alternatives, which might explain why my book was so well received. More and more people are looking for an alternative concept of what our economy should look like and which purpose it should serve.

Kate Raworth is a renegade economist focused on exploring the economic mindset needed to address the 21st century’s social and ecological challenges, and is the creator of the Doughnut of social and planetary boundaries. She is a Senior Visiting Research Associate at Oxford University’s Environmental Change Institute, where she teaches on the Masters in Environmental Change and Management. She is also a Senior Associate at the Cambridge Institute for Sustainability Leadership.

Article: The Commons Transition Primer
A new dedicated website by the P2P Foundation explains the meaning of and relationship between the Commons and peer-to-peer (P2P) frameworks, and details...
Report: The commons of humanity
We are unable to seriously envision a new economic paradigm for managing the earth’s shared resources, unless we first contemplate the need for a...
Article: Beyond state capitalism: The commons economy in our lifetimes
In considering the essential problem of how to produce and distribute material wealth, virtually all of the great economists in Western history have...
Blog: Implementing the commons in Europe
On November 15, the first meeting of the European Commons Assembly(ECA) will take place in Brussels to discuss, showcase, and bring into practice the...
Printer-friendly version