Facing the causes of the problems with immigration 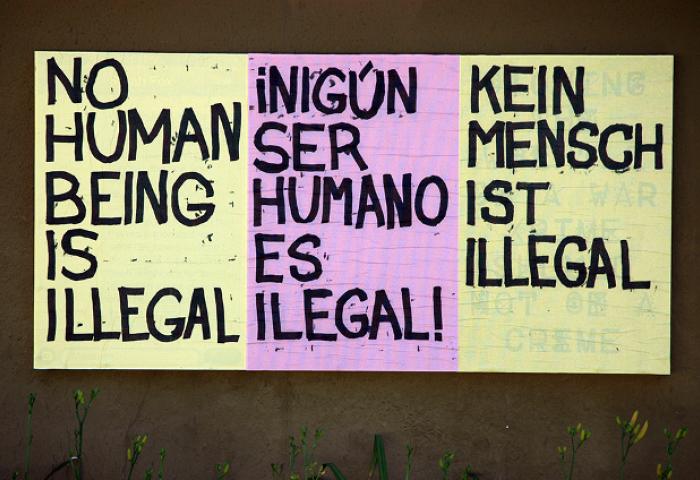 The root cause of our immigration problems arise out of gross global inequalities, and will have to be dealth with at the international level, sooner or later. Any quest for a solution should also rest on the foundation of the Universal Declaration of Human Rights, says Peter Marcuse.

The ultimate causes of the emigration producing immigration crises in the United States and elsewhere? Those would be the gross inequalities among and within nations in resources and power. The only real solution to the crisis? That would be to move to equalization and sharing among nations, through agreements and institutions at the international level — the opposite of the direction Donald Trump is moving U.S. policy.

Separating children from their parents, within the process of dealing with immigration, should be beyond the pale of reasonable disagreement, and the basic answer should be non-controversial: very simple, don’t do it! Indeed, we have no excuse for not dealing with the causes of the immigration problem as such.

Looking at causes seems almost taboo today. Either these causes come across as too complicated, and we have no time to think about them, or, if we do, the remedies seem so farfetched as to be utopian and not worth even thinking about.

But the cause of our immigration problem remains, in fact, quite simple. The need to emigrate from one country to another arises out of our gross global inequality: inequalities in income and wealth, inequalities in power, unequal levels of individual security and dignity. At least the first step dealing with these fundamental causes of emigration might seem to be equally clear: These causes can ultimately, but the sooner the better, be dealt with at the international level.

After the end of the First World War, in a brief flurry of interest for collective global action, the nations of the world went so far as to adopt a Universal Declaration of Human Rights, with language on a par in its nobility with the language of the United States Declaration of Independence.

This declaration deserves to be as familiar: “Recognition of the inherent dignity and of the equal and inalienable right of all members of the human family is the foundation of freedom, justice, and peace in the world.”

Any quest for the solution to the problems of immigration should rest on this foundation.

We might start that quest with the briefly discussed but ill-fated efforts to agree on national quotas. These at least reflected an incipient belief in an international approach to the problem. Agreement might be sought, perhaps, for international standards at some absolutely minimal level — no separation of children from parents or some guarantee of due process.

Some international standards already exist, in the definitions, for instance, agreed upon in the 1951 Geneva Convention on Refugees for concepts such as fear of persecution. Or in the agreements against the use of poison gas and chemical weapons in warfare. Why not international standards for the treatment of those seeking to emigrate out of similarly defined urgent need?

We also already have a variety of national and international limited agreements for immediate remedial measures. Germany finances aid to Turkey to promote its measures reducing flight from that country. Prime Minister Netanyahu of Israel, helped by the high commissioner for refugees, briefly signed an agreement, unfortunately short-lived, to support financially measures in Eritrea and Sudan to staunch the flow of refugees from those countries to Israel and to cooperate with other western countries to accept refugees emigrating from them. Other ideas have surely been advanced along similar lines and deserve study attention.

And could we not at least envision further principled moves to support universal free education through grades 12, with an international fund and matching local contributions for financing? Wasn’t there once a broad Marshall Plan that had victorious countries aiding devastated ones after the Second World War? Couldn’t such efforts at least be aspirations to put on the table in international conferences — and even in our own election campaigns? Wouldn’t positive relations with our allies and neighbors, not a route the Trump administration seems interested in taking, be enhanced by such discussions?

Might even Donald Trump find some value in such a direction, as relieving him, all alone, from having to face problems that he clearly is not on the way to solving by himself? Cynically, perhaps, but usefully, kicking the can of immigration reform upstairs?

Peter Marcuse is a professor emeritus of urban planning at Columbia University. Born in Berlin in 1928, he emigrated to the United States as a small boy early in the Third Reich. The author of many books, he currently blogs on critical planning and related concerns.

Filed under:
Inequality, War and conflict

Blog: End the wars to halt the refugee crisis
"Despite the obvious correlation between Western-sustained wars and the EU’s refugee crisis, no moral awakening is yet to be realized." By Ramzy Baroud.
Blog: A new deal for refugees and migrants?
As world leaders gear up for the first ever UN Summit on refugees and migrants, civil society organisations already expect the summit to fail to agree any...
Article: Standing in solidarity for a humanity without borders
Much has been made of the basic unfairness in how responsibility is shared between nations for ameliorating the refugee crisis. But the real question is...
Printer-friendly version