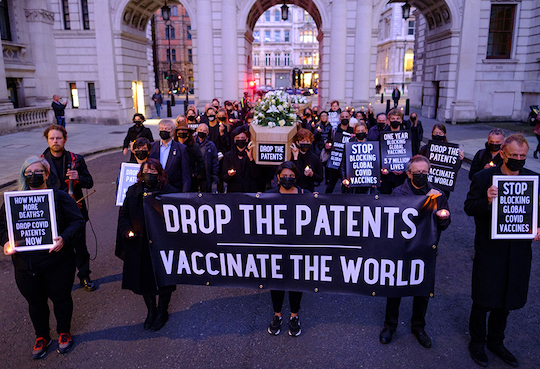 Dozens of youth-led advocacy groups from around the world have published an open letter urging the European Union, the United Kingdom, Norway, and Switzerland to immediately end their opposition to a proposed patent waiver for coronavirus vaccines, which still remain out of reach for billions of people in poor countries. By Jake Johnson at Commondreams.org

"We write to you as young people, frustrated and disappointed with the way that the pandemic has been handled," reads the new letter, which was signed by more than 40 student and youth organizations based in India, South Africa, Zambia, France, Argentina, and other nations.

"The blocking of the TRIPS waiver and the failure to share the necessary technology has fundamentally undermined the right to live full lives," the letter continues. "There is no reason to leave the burden of fixing this system to us as future generations when immediate solutions exist."

Throughout the roughly 14 months since India and South Africa first introduced their plan for a temporary patent waiver at the World Trade Organization, European countries have repeatedly stonewalled the proposal and pushed alternatives that critics say wouldn't challenge the pharmaceutical industry's monopoly control over vaccine production.

Under pressure from African countries to change its stance, the E.U. leadership has reiterated its opposition to the patent waiver in recent days.

Proponents argue that a suspension of intellectual property protections—paired with vaccine technology transfers that rich nations and pharmaceutical companies have also opposed—would allow developing countries to independently produce coronavirus vaccines for their populations.

"Pharmaceutical companies have claimed that the vaccine technology is too complex to be licensed or shared. Contrary to these claims, experts argue that the mRNA vaccine is easier to develop and Doctors Without Borders recently published a report showing that there are 120 possible manufacturers in the Global South," the youth organizations wrote. "Thus, a temporary waiver of the TRIPS agreement can significantly increase the production rate and ensure a wider, more equitable global vaccine access."

In the absence of a patent waiver or tech transfer, low-income nations have largely been forced to rely on vaccine charity efforts that have been plaguedby cash shortages, mismanagement, and inadequate donations from the rich countries hoarding much of the global supply.

The result has been vast and persistent inequities in vaccine distribution. The latest figures from Our World in Data show that fewer than 11% of people in low-income countries have received at least one coronavirus vaccine dose.

One commentator recently observed that "out of more than nine billion vaccines doses produced, Africa has only received approximately 540 million (about 6% of all Covid vaccines, despite having 17% of the world's population) and
administered 309 million doses."

According to an analysis released by the People's Vaccine Alliance, the E.U. is set to throw away almost twice as many coronavirus vaccine doses as it has donated to Africa so far this year.

In their letter, the youth organizations warned that "this extreme vaccine inequality perpetuates the current crisis" and "threatens to create dangerous new variants."

"Publicly funded vaccines should not be used to make pharmaceutical giants richer," the groups wrote. "Unelected, undemocratic pharmaceutical companies cannot continue to dictate the global distribution of vaccines... We implore you to unconditionally support the TRIPS waiver and facilitate Covid-19-related technology and knowledge transfer before the next WTO meeting at the end of March 2022."

"The vaccination strategy will only be effective if the whole of humanity has access to vaccines," they added. "Our common success against this pandemic lies in your hands."

Report: Pharmaceutical companies’ failure on equal vaccine access contributed to human rights catastrophe in 2021
Despite urgent calls to ensure the equal distribution of Covid-19 vaccines, pharmaceutical companies tragically failed to rise to the challenge of a once-...
Blog: A new international health order is within reach
To end the pandemic, we need a transformative shift away from the short-termist and profit-captive model of global health governance. And Cuba is showing...
Blog: Health innovation for all
Until we can ensure equal availability of vaccines worldwide, the coronavirus will remain in charge. Critical health technologies must be considered part...
Blog: Omicron: Vaccine nationalism will only perpetuate the pandemic
If we do not want COVID-19 to continue exacerbating the colonial world order, we need change - starting with an intellectual property waiver, says Fatima...
Report: New report shows leading Covid-19 vaccine pharma companies fuelling unprecedented human rights crisis
Six companies at the helm of the Covid-19 vaccine roll-out are fuelling an unprecedented human rights crisis through their refusal to waive intellectual...
Printer-friendly version