How can we turn military spending into a budget for the people? 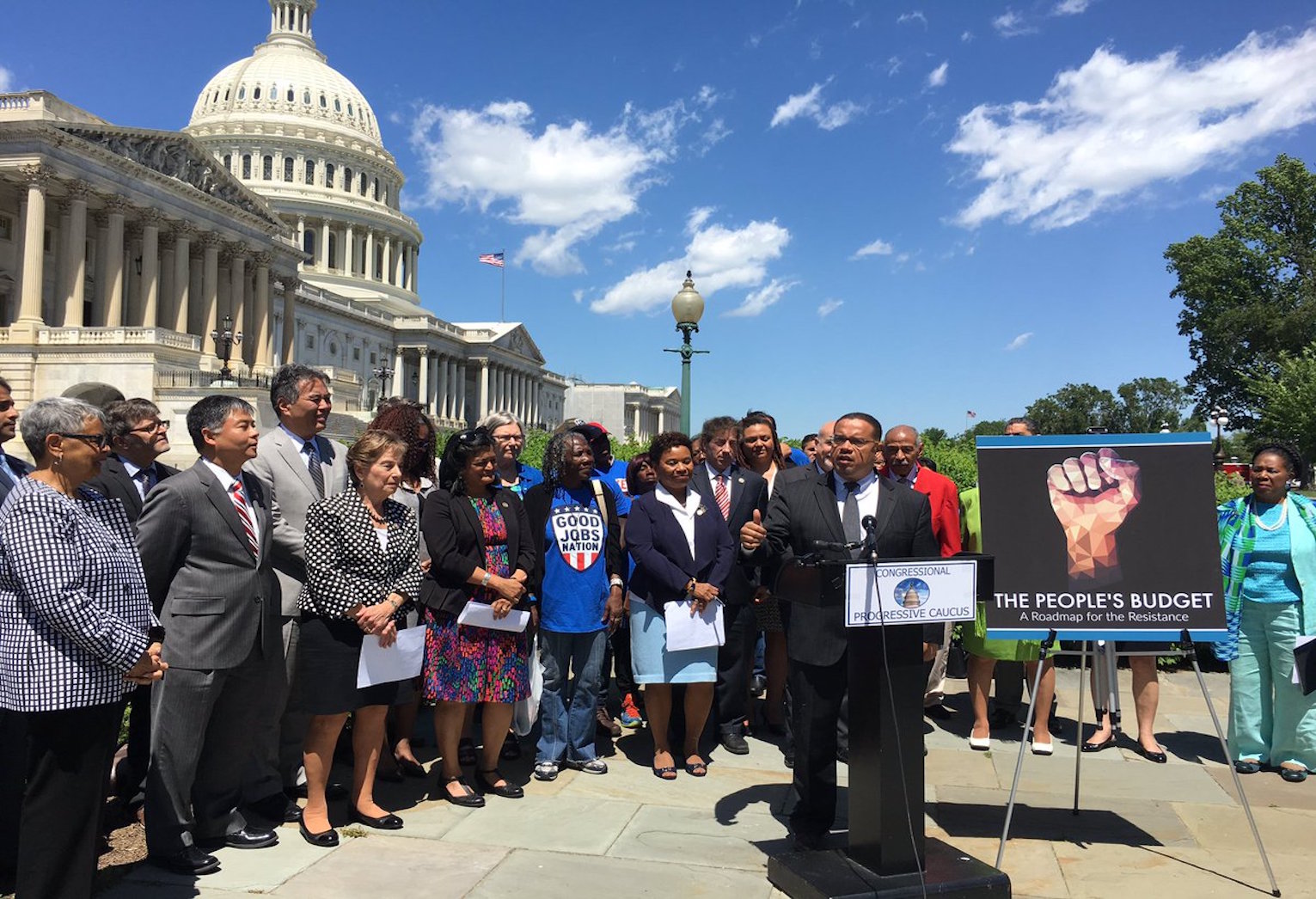 While President Trump’s 2018 budget proposes giving more than $700 billion to the military, it will come at the expense of trillions of dollars in cuts to the safety net over the coming decade. But an alternative is mapped out in The People's Budget, which aims to limit investment in the military and pump money into jobs, education, health care and climate resiliency. And it's getting growing support, writes Frida Berrigan for Waging Nonviolence.

Connecticut is the only state in the union that does not have a budget, and the state’s bills are being paid in emergency supplementals — or going past due. The state is budget-less, so my town of New London — one of its smaller urban communities — doesn’t have a budget either. That means a hiring freeze at our local schools, budget cuts and tax increases from City Council, the farmer’s markets not accepting senior citizen vouchers this summer, the downtown library cutting its hours, a smaller pool of money to pay for the heating needs of low-income people this winter and several other important city-funded offerings.

So far, this belt tightening has resulted in longer lines at the food pantries and an added weight of stress to already vulnerable and burdened people. Eventually, if it goes on long enough, the people impacted by these cuts — and the bigger ones on the horizon — will look across our river to the big industrial facilities that mar our otherwise beautiful view. The General Dynamics Electric Boat corporation isn’t tightening its belt or trimming its excess or trying to make more with less. It just got a $5 billion contract to build a new class of nuclear-powered, nuclear-armed submarines.

Have you been worried about the United States not having enough nuclear submarines? Me neither. But Electric Boat is booming. The same can be said for most of the bad old military-industrial complex. President Trump’s 2018 budget is a brutal behemoth that proposes giving more than $700 billion to the military — a lot of it going right into the very pockets of the military-industrial complex.

That would be bad enough, but the problem isn’t that we are spending more on the military — it’s that it comes at the expense of just about every social good imaginable. Over the next decade, the Republican-held White House and Congress are planning over $5 trillion in cuts to the safety net.

Comparisons to the military budget abound: We spend more than the next seven nations combined; one year of military spending could hire every unemployed person in the United States and put them to work in a high paid infrastructure rebuilding job; if you took the military budget in $100 bills it would circle the equator 500 times. (OK, I made that last one up.) But here is one that is pretty profound: According to the math of Alex Emmons, a reporter for The Intercept, just the increase to the military budget from 2017 to 2018 ($80 billion) that the Senate approved would be enough to make “public colleges and universities in America tuition free.”

Let’s pause here. The budget situation in Connecticut is so severe that one version of the budget being promoted by state Republicans would cut hundreds of millions of dollars in state funding for the University of Connecticut system. University representatives and Democratic leaders responded by saying that such cuts would essentially shutter institutions where lower-income, first generation students seek higher education. Why cry poverty when there are billions that could be gleaned out of the military-industrial complex?

Getting there is the hard part, but — thanks to the People’s Budget — we have a map to follow.

More than 100 representatives voted for the People’s Budget earlier this month, which limits investment in the military and pumps money into jobs, education, health care and climate resiliency. Of course, the resolution was not binding and was voted down by the House. Nevertheless, the ideas in the People’s Budget provide a clear, concise plan for mobilizing the significant resources of the United States in the service of its people — which is kind of how it is supposed to be, right?

The document comes courtesy of the Congressional Progressive Caucus — they compile it every year — but it is more than a Washington effort. The breadth of organizational support for the People’s Budget is impressive: from Planned Parenthood to Network: The Catholic Social Justice Lobby to VoteVets to Peace Action to dozens of other organizations representing the interests of hundreds of thousands of people, all setting aside policy differences to work together to achieve a different kind of national security.

Their aims include a $2 trillion investment in America’s energy, water and transportation systems; higher taxes on Wall Street firms and corporations that offshore jobs; a minimum wage hike and stronger union rights; auditing the Pentagon budget; and making debt-free college “a reality for all students.”

According to the Economic Policy Institute, the People’s Budget would add 2.4 million jobs and increase GDP by 2 percent in the near term. And when it turns its attention to the military, the Progressive Caucus’ budget “prohibits any expansion of U.S. combat troops in Syria, prohibits an increase in defense spending and slashes wasteful Pentagon spending.”

Peace Action senior director for policy and political affairs Paul Kawika Martin sees something fundamentally hopeful in this annual process. “Every year, it gets better,” he said in a recent interview. “More Democrats vote for the People’s Budget and we push the party closer to representing our ideals.”

Up against the Pentagon’s pervasive reach and endless resources — not to mention the military-industrial complex’s practice of strategically citing its manufacturing in key congressional districts and spending millions on lobbying every year — this has to count as real progress.

Still, it can’t just happen inside the Beltway. The People’s Budget also provides an opportunity to organize locally and to ask the questions: What is security? How much should it cost? Is it walls? Impregnable borders? Militarized police forces? Pervasive surveillance? Guns? Or is it local autonomy, affordable housing, accessible medical care, livable wages, truly representative government, and a sense of well-being that doesn’t cost a lot, but sure is priceless? With the war in Afghanistan entering its 17th year, swaths of our country digging out of damage from fires and hurricanes, and communities trying to find sanity in the wake of another mass shooting, it is a critical question.

Blog: Uncover the truth that's keeping people in poverty
When companies don’t pay their fair share of tax, it hits the world’s poorest people the hardest – depriving their governments of money that could be...
Article: Introducing a new resolution for a Global Marshall Plan
In cooperation with the Network of spiritual Progressives, Congressman Keith Ellison has re-introduced a resolution to the House of Representatives for a...
Article: Global Social Protection Charter
At the Asia-Europe People’s Forum (AEPF) of July 2016, the initiative was taken to draft a Global Charter for 'Universal Social Protection Rights'. These...
Report: Heralding Article 25: A people's strategy for world transformation
After so many years of political inaction only the massed goodwill of ordinary people can bring about an end to poverty in a world of plenty through...
Report: Financing the global sharing economy, part three (3): divert military spending
This section of the report Financing the Global Sharing Economy demonstrates how governments could redirect the colossal financial resources currently...
Printer-friendly version