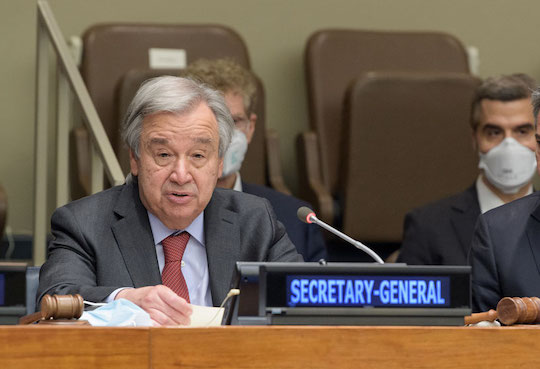 One person is dying from hunger every 48 seconds in East Africa. A global galvanising effort is urgently needed, writes Gareth Owen for openDemocracy.org

The combined effects of climate change, COVID-19 and the Ukraine war are threatening a global disaster that not nearly enough people are talking about, least of all world leaders.

In just two years, the number of severely food insecure people has doubled from 135 million to 276 million, with almost 50 million on the edge of famine.

Global food commodities and fuel prices are soaring due to the conflict in Ukraine, which, together with Russia, provides huge quantities of the wheat, maize and sunflower oil used to feed populations in places like Somalia, Yemen and Lebanon.

But even before Russia invaded Ukraine, it was clear there could be famines this summer.

A new report, co-authored by the UN’s Food and Agricultural Organization and the World Food Programme, warned humanitarian action is urgently needed in 20 “hunger hotspots”. These are areas where lives and livelihoods are likely to be endangered by “a significant deterioration of acute food insecurity in the coming months”.

Among the hotspots are Afghanistan, the Central African Republic, the Democratic Republic of the Congo, Haiti, Honduras, the Sudan and the Syrian Arab Republic, while Ethiopia, Nigeria, South Sudan and Yemen are the four countries most at risk.

The Ukraine crisis will likely be cited as the reason why world leaders have not yet responded to such warnings with an urgently needed global galvanising effort – but it shouldn’t be.

I began my aid career responding to famine in Somalia in 1993. Three decades later, the world has changed and the causes are different, but the obscenity of lives unnecessarily lost to starvation remains tragically the same.

Today, it is estimated that one person is dying from hunger every 48 seconds in drought-ravaged East Africa. Nearly half a million people are facing famine-like conditions across parts of Ethiopia and Somalia, with the lives of 350,000 severely malnourished children hanging in the balance in the latter. In Kenya, 3.5 million people suffer from extreme hunger, while across the three countries, this rises to over 23 million – more than double the number last year.

This desperate situation is far from unique: around four million children aged under five in Africa’s Central Sahel are at risk of starvation in the coming weeks. West Africa is facing its worst food crisis in a decade, with 27 million affected – up from seven million in 2015.

Yet, urgent appeals are woefully underfunded.

On 26 April, world leaders pledged $1.4bn for the East Africa crisis – far less than the United Nations request for $4.4bn. Moreover, not all the donations are new money, some of the amount pledged is funding already allocated. To make matters worse, just 2% ($93.1m) of the current appealhas actually arrived.

In 2017, when 16 million people in East Africa faced severe hunger, the UK provided £861m as part of the timely global response that helped avert widespread famine. Despite a higher number of people affected, over the past year the UK allocated only £219m to the three countries.

The sotry is no better in places like Yemen and Afghanistan, where less than a third of the humanitarian funds needed in 2022 have been made available, but the needs remain enormous. It's a story that is repeated in most current humanitarian emergencies, a tale of financial susterity that has been consistently trending downwards in recent years. Except in Ukraine, where rich nations successfully raised over $16bn in one month to address the terrible crisis. The stark fact is that the massive, abundantly resourced humanitarian response in Ukraine may come at the expense of lives elsewhere.

A new report, ‘Dangerous Delay 2: The Cost of Inaction’, produced by Save the Children and Oxfam in partnership with the Jameel Observatory, warns that national and global responses largely remain too slow and too limited to prevent a repeat of Somalia’s 2011 famine, which killed more than 260,000 people. Entrenched bureaucracies and political choices continue to curtail a unified global response, despite enhanced government programmes, improved early warning systems and efforts by local organisations.

The clock is ticking. Every minute that passes is a minute closer to starvation and possible death for children. It should be unconscionable that millions of children’s lives are at risk. But, without political action to tackle inequality and climate change, preventing people from dying of starvation will not stop the cyclical and predictable crises experienced by millions around the world.

Mass starvation is always a failure of leadership. If we are unable to summon the collective political will to meet the most basic survival needs of millions of people today, then what chance does the human race have of solving the ever graver planetary challenges that inevitably lie ahead?

Forty-Nine Million People in 43 Countries One Step Away from Famine, Secretary-General Warns in Briefing to Security Council on Conflict, Food Security - United Nations, 19 May 2022

Report: 'Profiting from Pain': Covid created a billionaire every 30 hours
As the cost of essential goods rises faster than it has in decades, billionaires in the food and energy sectors are increasing their fortunes by $1...
Blog: Inequality tightens its grip on the most vulnerable
Please do not say you were not aware that the world produces enough food to feed all human beings on Earth, while nearly double the combined European...
News: Hunger crisis grips Horn of Africa – but 80% of Britons unaware, poll shows
The UK government has been urged to give the hunger crisis gripping the Horn of Africa “proper attention”, as new polling showed just two in 10 people in...
News: 'Avoidable tragedy': Rich nation failures blamed as global hunger hits record high
The number of people suffering from extreme hunger reached an all-time high in 2021 and is on track to increase further this year—unless wealthy countries...
Blog: Cost of the Ukraine war felt in Africa, Global South
As the West is busy dealing with its own economic woes while cutting off Russian exports, little heed is being paid to those suffering the most, writes...
Printer-friendly version