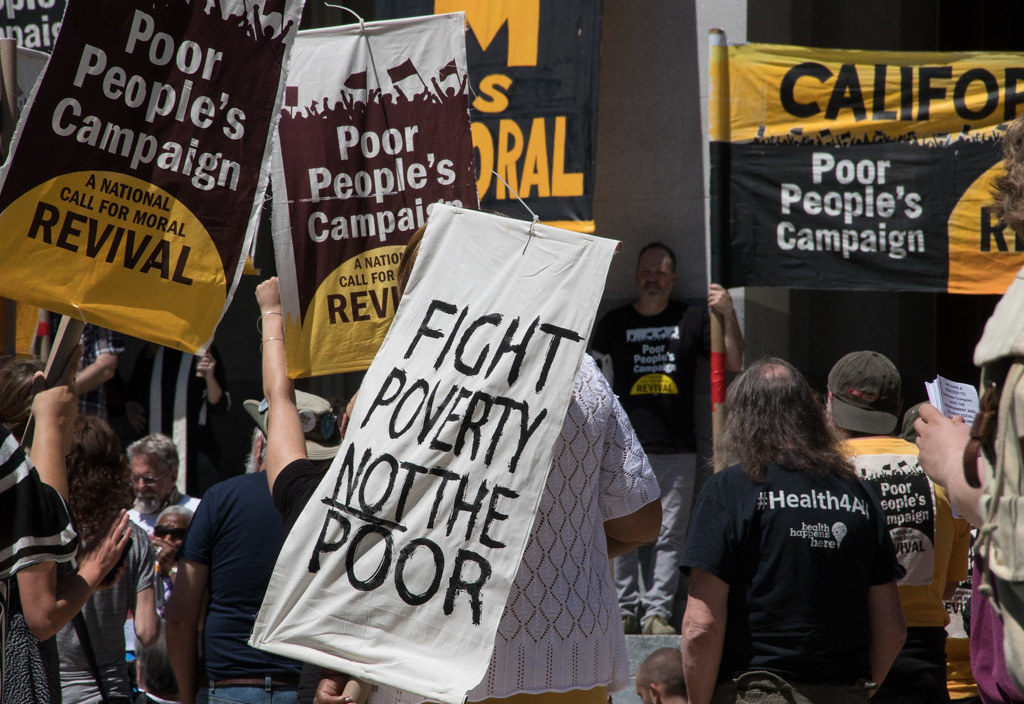 About 100 million Americans are effectively hidden by official poverty statistics, yet enough revenue could be raised from fair taxes to completely eliminate poverty in the United States, writes Karen Dolan.

New U.S. Census data shows a slight decrease in official poverty in 2018, but it also hides a darker reality.

The latest Census figures show this official poverty rate inching downward from 12.3 percent in 2017 to 11.8 percent last year. That means about 38.1 million Americans are below the official poverty line.

The White House Council of Economic advisers claims this new data shows Trump’s economic policies have lifted up those who had been “forgotten in the past.” In reality, the decrease is a cumulative result of a decade of recovery beginning under the Obama administration, which in 2015 oversaw the largest single annual drop in the official poverty rate since 1999. Moreover, huge racial disparities remain in income and wealth.

But in any case, the official poverty measure is a very poor indicator of economic hardship in this country. In 2018, the Federal Poverty Level for a family of four in the mainland United States was $25,100 — an abysmally low standard of living.

The problem of people living with poverty and struggling to make ends meet is far more widespread than the official poverty rate — measured with a 50-year old yardstick — would indicate.

A somewhat clearer indicator is the Supplemental Poverty Measure (SPM). While the official poverty measure counts only cash income, the SPM also counts social assistance like the Earned Income Tax Credit and SNAP, as well as out-of-pocket expenses for health care and work and regional differences in costs of living. When these factors are included, the overall poverty rate rises to 13.1 percent, or about 42.8 million people.

But even that number is too low. The truth is, millions more low-income people — defined in many official programs as those living at between one and two times the official poverty level — still hover at the edges of poverty, just one illness or divorce or job loss away from disaster.

In a 2017 study, the Institute for Policy Studies and the Poor People’s Campaign counted the number of people living at up to twice the SPM. All told, they found around 140 million Americans who are poor or low-income. These roughly 140 million people make up over 43 percent of the population — about equal to the proportion of Americans the Fed found who can't afford a single $400 emergency.

That means about 100 million Americans are effectively hidden by official poverty statistics.

The Poor People’s Campaign, co-chaired by the Revs. William Barber Jrand Liz Theoharis and organized by poor people in 43 states, wants to put those 140 million people at the center of our politics. Picking up where Martin Luther King, Jr.’s original Poor People’s Campaign left off in the 1960s, they argue that this hardship is not the fault of the poor. Instead, they say it’s the inevitable result of systemic racism, anti-poor public policies, ecological destruction and militarism.

Not only is the Trump administration pretending these people don’t exist — going so far as to declare the “war on poverty” over, and coming up with various statistical sleights of hand to hide the poor further — it’s taking action to swell their ranks.

In nearly every budget request it’s made, the White House has proposed sweeping cuts to safety net programs, including food assistance, Social Security, Medicare, and Medicaid. Meanwhile its attacks on the Affordable Care Act, state Medicaid programs, and immigrants seeking social services have increased our historically low uninsured rate for the first time since ObamaCare was passed, the Census found.

While the Trump administration has called an end to the “war on poverty” and the social programs that sustain it, the truth is we need much bigger investments to raise everyone’s standard of living.

The Institute for Policy Studies and the People’s Campaign found an extra $886 billion in estimated annual revenue that could come from fair taxes on the wealthy, corporations, and Wall Street. This could eliminate poverty in the United States.

Meanwhile, transferring $350 billion from the enormous U.S. military budget — which would still leave it larger than China, Russia, and Iran’s combined — could additionally be used to fund Medicare for All or other universal programs.

Whatever the new numbers say, the reality is that nearly 140 million of us are either living in poverty or just one setback away from it. It’s not just the 38 million below the official poverty line who stand to lose if the administration gets its way, but the hidden 100 million more who are treading water to stay above it.

Karen Dolan directs the criminalization of race and poverty project at the Institute for Policy Studies. She’s a coauthor of the IPS-Poor People’s Campaign reports “The Souls of Poor Folk” and “A Poor People’s Moral Budget.”

Blog: Join STWR's postcard 'mailblast' campaign
We are currently running a postcard campaign in the United States, and invite you to join us with the smallest effort and expense. The aim is to send a...
Report: 'Everybody has the right to live': The visionary budget at the heart of our moral uprising
Basic living standards like adequate housing, health care, education, safe drinking water, and access to work and fair wages are rights, not privileges. A...
Report: The souls of poor folk
A major new study makes a clear case that the richest nation in the world has sufficient resources to protect the environment and ensure dignified lives...
Report: Heralding Article 25: A people's strategy for world transformation
After so many years of political inaction only the massed goodwill of ordinary people can bring about an end to poverty in a world of plenty through...
Article: Huge organizing effort, '40 days of action' launching to fight poverty
Fifty years after Martin Luther King's initiative, a new Poor People’s Campaign connects religious faith to social justice. An interview with Rev. Dr. Liz...
Printer-friendly version