A new international health order is within reach 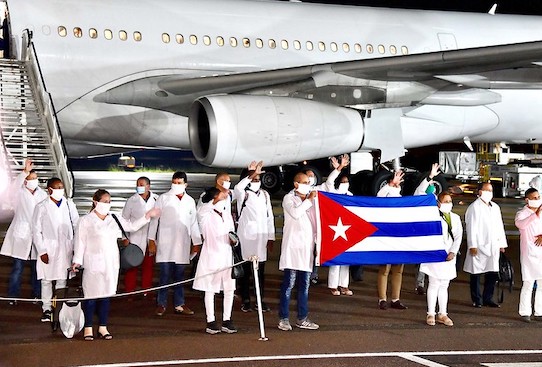 To end the pandemic, we need a transformative shift away from the short-termist and profit-captive model of global health governance. And Cuba is showing the way, writes Zackie Achmat.

We have entered the age of pandemics. COVID-19 dominates the headlines, and rightly so; January has seen a record-high number of cases worldwide. But that is not all. The AIDS pandemic rages on – 34 percent of people with HIV did not receive a viral suppressant in 2020. Meanwhile, a rapidly changing climate is set to turbocharge malaria as warmer temperatures aid the spread of disease-carrying mosquitoes. The World Bank estimates that 5.2 billion people will contract the disease by 2050.

Yet we have no plan to end the pandemics of today – or stop the ones of tomorrow. On the contrary, like the AIDS crisis, the COVID-19 pandemic has seen empty pledges and paltry donations, overshadowed by panicked responses from governments, stigmatisation of marginalised communities, and unchecked profiteering by pharmaceutical companies.

If there is one thing I have learned from my work combating the AIDS pandemic, it is that we simply cannot rely on the wisdom of pharmaceutical executives or the generosity of the Global North where they live. To end the pandemic, we need a radical break, a transformative shift away from the short-termist and profit-captive model of global health governance. But what would a new model look like?

Enter Cuba. While global leaders have been delaying decisive action, Cuba has developed its own COVID-19 vaccines, successfully immunised most of its population, and is now set to help vaccinate the world. Its approach rests on two principles: investment in public health and internationalism.

In the summer of 2021, Cuba’s regulatory agency CECMED approved two home-grown vaccines, Soberana and Abdala, stated to be more than 90-percent effective – vaulting Cuba to the top of the list of countries by vaccination rates within months. With 86 percent of the island’s population now inoculated, Cuba’s vaccines are being touted as the “best hope for low-income countries” – in particular because they are reportedly cheap to produce, can be manufactured at scale and do not require deep freezing.

Cuba’s vaccines have been accessed in medical journals and the country has sought emergency-use approval for its vaccines from the World Health Organization. Vicente Verez, head of Cuba’s Finlay Vaccine Institute has said that all necessary documents and data would be submitted to the WHO in the first quarter of 2022.

How could Cuba achieve this feat? The country has a long history of prioritising public health and investing in pharmaceutical production. This focus has been partly driven by the need for domestically produced goods to overcome the scarcities caused by the gruelling US embargo, imposed after the Cuban socialist revolution, but also driven by a strong commitment to public health over private profit.

Between 1990 and 1996 alone, Cuba invested $1bn, about 1.5 percent of its GNP, into a cluster of biotechnology institutions where any money earned was reinvested. Today, 517 of the 800 or so medicines consumed in Cuba are produced domestically, boosting the country’s public healthcare capacity. The benefit of Cuba’s substantial state investment in medical science means the benefits accrue to the Cuban people, not Big Pharma. By contrast, governments of countries like the United States and the United Kingdom gave away the rights to vaccines produced using enormous public funding. As a result, pharmaceutical companies hold vaccine recipes under lock-and-key.

I remember listening to the then-WHO Director-General Margaret Chan’s words in 2015 as Cuba became the first country in the world to eliminate mother-to-child HIV transmission. She called it “one of the greatest public health achievements possible”. For those of us in the movement, it was a significant milestone, a source of hope towards an AIDS-free generation.

When public health and medical science reinforce one another, each consecutive success comes on the back of previous ones. The technology for Cuba’s COVID-19 vaccines, for instance, is adapted from an existing vaccine for hepatitis B, leading to faster studies.

As rich countries hoard vaccines and big pharmaceutical companies make super-profits by refusing to share technology, Cuba has declared its commitment to share its vaccines through open licensing and at low prices. It has begun exporting the two home-grown vaccines to multiple countries in need and, importantly, plans to send teams to Vietnam and Iran to support technology transfer to aid the countries in producing the vaccines domestically.

This second principle, of internationalism, is best exemplified by Cuba’s Henry Reeve Brigade, often dubbed an “army of white coats”. At the start of the pandemic, Crema, a small town in Italy, found itself overcome by a surge of cases, with few public hospitals and doctors at its disposal. Soon, 52 Cuban healthcare professionals arrived to help; their “sense of humanity left us overwhelmed”, said the town’s mayor Stefania Bonaldi. Since the start of the pandemic, some 40 countries across five continents have received Cuban medics.

Building on this legacy, representatives from Cuba’s state-run biotechnology organisation BioCubaFarma and the Ministry of Public Health will address the international press and members of the scientific community this week in a showcase of the Cuban vaccines. The briefing, convened by Progressive International, is an opportunity for the international media and community to question the Cubans about the development, regulatory protocols, and deployment of their COVID-19 vaccines.

There can be no illusions about the path ahead. The US embargo will limit Cuba’s ability to access credit and collaborate with suppliers, decreasing its capacity to produce and export at scale. Cuba must move quickly to not only share its vaccine but its message and model of internationalism. Whatever reservations we may have about Cuba’s political system, its commitment to global health equity is unmatched. If we follow its lead, it could herald an end to the reign of pharmaceutical monopolies enforced by rich countries. A new international health order is within reach.

News: Covid vaccines create 9 new billionaires with combined wealth greater than cost of vaccinating world’s poorest countries
At least nine people have become new billionaires since the beginning of the COVID pandemic, thanks to the excessive profits pharmaceutical corporations...
News: Covid-19 vaccines are being hoarded by rich countries - poor ones are missing out
Lost among the jubilation of vaccine rollouts in rich countries is an uncomfortable reality: The world's poorest countries will have to wait months and...
News: Global south-led vaccine summit eyes new tech-sharing platform
Global South states commit to share Covid-19 vaccine technology and production at a four-day 'Summit for Vaccine Internationalism'.
Blog: Health innovation for all
Until we can ensure equal availability of vaccines worldwide, the coronavirus will remain in charge. Critical health technologies must be considered part...
Blog: Omicron: Vaccine nationalism will only perpetuate the pandemic
If we do not want COVID-19 to continue exacerbating the colonial world order, we need change - starting with an intellectual property waiver, says Fatima...
Printer-friendly version