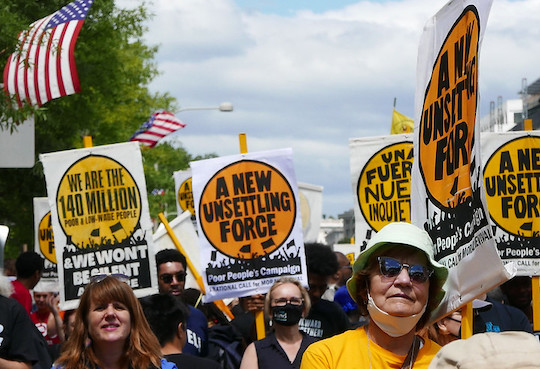 Tens of thousands of people joined the Mass Poor People's and Low-Wage Workers' Assembly and Moral March on Washington and to the Polls on June 18. By Eleanor J. Bader for Common Dreams.

After her niece, a low-income mother of three, was murdered several years ago, Wel'ega Ma'Shak of Galt, California, joined Missing and Murdered Indigenous Women (MMIW) to feel less alone in her grief. She also joined the state chapter of the Poor People's Campaign (PPC), and on Saturday, June 18, she stood with tens of thousands of people in Washington, D.C.—representing MMIW—to condemn government policies that elevate militarism over human needs and to denounce religious bigotry and legislation that allows racism, sexism, classism, and homophobia to persist.

The day was a mix of the personal and the political.

The Reverend Jennifer Barrett, a Disciples of Christ pastor from Kansas City, Kansas, was initially drawn to the Mass Poor People's and Low-Wage Workers' Assembly and Moral March on Washington and to the Polls because of increasing barriers to voting in the United States.

"Making voting harder is disgusting to me," she tells The Progressive. "We have to do better and protect the rights of all people to choose their representatives. We can't be silent anymore."

Barrett, who attended the march with her twenty-two-year-old daughter, then adds: "I'm also here for a longtime friend who's a single mom of two. She's a full-time teacher in Blue Valley, Kansas, and has to work a second job to make ends meet. Despite this, every month there's a $500 shortfall in her finances. This is just wrong."

Valora Starr, a lay pastor from Chicago's Bethel Lutheran Church, is standing near the Barretts and overhears our conversation. As a child in 1968, she says, she didn't understand the importance of the original Poor People's Campaign led by the Reverend Martin Luther King Jr. "Now I know," she says. "Yes, the arc may bend toward justice, but it is not bending fast enough. I'm here with a group of Black children from my church, and I want them to feel what it means to rise up and organize for peace, justice, and equality."

Like many at Saturday's march, Starr believes that spiritual uplift is inseparable from activism, and stresses that prayer and practice are two sides of the same coin. "Praying with our feet," an idea popularized by Frederick Douglass, is important, she says, since change will not happen without pressure.

The visibly religious crowd waved banners and signs to promote the issues that brought them to the nation's capital. Placards read "Fight Poverty, Not the Poor" and "Fund People, Not War"; others proclaimed "There is Enough for Everyone," "Todo el Mundo Necesita el Derecho a Vivir" or "All People of the World Need the Right to Live," and "Poverty is Violence."

In addition to changing our domestic priorities, many attendees also expressed concern about U.S. foreign policy. "Human rights are not just for people in the United States," Melissa Nuwaysir of the Washington, D.C., metro area chapter of Jewish Voice for Peace tells The Progressive. "We need to make sure that militarism and U.S. support for authoritarian and oppressive governments, including Israel, don't get sidelined."

Indeed, reducing the grotesquely bloated U.S. military budget has long been a goal of the PPC. As one of their pre-printed signs reminded rally goers, since 9/11, the United States has spent more than $20 trillion on war.

"The military budget is immoral," PPC co-chair, the Reverend Dr. William J. Barber II, told the cheering crowd. "This is why we need a third Reconstruction."

This, Barber explained, will build on the work done after the Civil War (the first Reconstruction) and during the contemporary civil rights movement led by Reverend King (the second Reconstruction).

"We are a fusion coalition," he said, "and we will continue our work until sick folks are healed, until affordable housing is provided, until the land and water are protected, and until saving the world is more important than blowing it up. . . . This promise is not negotiable. We won't be silent or unseen any longer."

The PPC's strategy is to build from the bottom up, co-chair Reverend Liz Theoharis told the assembly. "The low-wage workers, the left out, and the excluded are a social force," she said. "When we cry for justice, when we cry for power, when we take bold action," we show those in leadership what's possible.

What's more, Theorharis added, those who are most directly impacted by racism, sexism, homophobia, and poverty can take strength from each other.

But the day offered far more than anger, sadness and despair: Performances by a PPC choir got the crowd clapping, swaying, and raising their voices in joyful song. All told, it was a heady and inspiring day.

The PPC estimates that there are 140 million poor and low-income people in the United States, with slightly more than half of all children living at or near the federal poverty level of $18,310 for a household of two and $27,750 for a unit of four.

"Any nation that ignores nearly half of its citizens is in a moral, economic, and political crisis," Barber told the assembly.

"We have the ability to win but it will take a growing movement of poor and working people to take action," Jack Arnow, a retired teacher from Brooklyn, New York, tells The Progressive.

He adds: "Today's protest has been wonderful, but we now need to use our power to vote, to resist, and to do the hard work of organizing a much bigger group of supporters."

For more information or to participate in the Poor People's Campaign text MORAL to 38542 or search online for #PoorPeoplesCampaign and #MoralAssembly2022.

ELEANOR J. BADER is a teacher, freelance writer and activist from Brooklyn, NY. She is also the co-author of Targets of Hatred: Anti-Abortion Terrorism, St. Martin's Press, 2001.