The UN at 75: Time to give citizens a voice 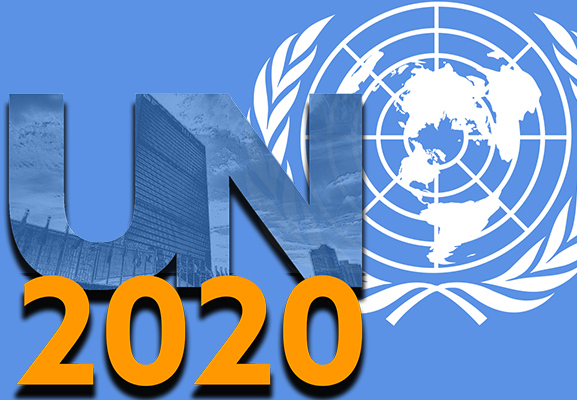 A global civic participation campaign calls for the creation of a World Citizens’ Initiative on the occasion of the UN’s 75th anniversary. This new instrument could enable individual citizens to influence the world organization’s work, writes Andreas Bummel and Bruno Kaufmann.

Next year the United Nations will commemorate its 75th anniversary. The General Assembly determined that all the UN’s activities in 2020 shall be guided by the theme “The future we want, the United Nations we need: reaffirming our collective commitment to multilateralism”.

In January the Secretariat plans1 to launch “the biggest-ever global conversation” on the role of global cooperation and to build a “global vision of 2045.”

The UN Charter begins with the words: “We the Peoples”. The Universal Declaration on Human Rights clearly states in article 21.1. that everyone has the right to take part in the government of their country, directly or through freely chosen representatives.

Thus, it should not come as a surprise that this right to participation will now also extend to the forthcoming “global conversation”, as the UN has stated that anybody who wishes to, will be able to join.

At the same time, this is a bold statement in times of deep divides on not just the role of the UN but even more so about the role of citizens and civil society in shaping its affairs. It was only after contentious debates among member states, for instance, that a minor role for civil society was included in the formal resolution on UN75 adopted earlier this year.

The problem is well known.

Fifteen years ago, the Cardoso panel on the relations between the UN and civil society established by then Secretary-General Kofi Annan outlined2 the democratic deficit of global governance in clear terms.

They argued among other things that the UN should help “strengthen democracy for the twenty-first century” by emphasizing participatory democracy and deeper accountability of institutions to the global public.

Unfortunately, most member states had no appetite to look into this further. Despite all efforts to include non-state actors, the UN’s democratic deficit remains critical and undermines the world organization’s credibility.

The alternative People’s Assembly that was held in parallel to the UN’s summit on the Sustainable Development Goals in September in New York concluded that the “world is on fire” not least due to a dramatic “crisis of accountability and governance” that extends to the UN.

As well-intentioned it may be, the UN’s global PR campaign that will be rolled out in the course of next year on the occasion of the 75th anniversary will not be able to alleviate the problem unless it leads to tangible institutional change.

From our point of view the UN is an indispensable centre for global deliberation, collaboration and action. The role of the UN as conscience keeper and upholder of universal norms and values remains steadfast.

However, the notion of multilateralism needs to evolve beyond purely intergovernmental engagement and open up to avenues for public and civil society participation. In itself this is a challenging task when “civic space” remains constrained for large swathes of the globe’s population.4

A commitment to multilateralism at present should acknowledge more than ever that the UN’s success depends on strong partnerships with major groups and stakeholders across the world.

As the Earth Summit 2012 stated, sustainable development requires their meaningful involvement and active participation in processes that contribute to decision-making, planning and implementation of policies and programmes at all levels.

A global civic participation campaign5 launched today by a broad alliance of citizens’ initiatives, civil society groups and networks from across the world, jointly coordinated by Democracy Without Borders, Democracy International and CIVICUS: World Alliance for Citizen Participation, calls on the UN and its member states to go a step further.

The UN we need and the UN we want welcomes and seeks the input of “We the Peoples” in whose name it was established 75 years ago. Yet, there is no formal and well-structured UN instrument that enables individual citizens to influence the world organization’s work and this has to change.

A global organization that wishes to leave no one behind – as member states pledged when they adopted the Agenda 2030 – needs to include everyone.

In fact, the General Assembly has repeatedly stated the “right to equitable participation of all, without any discrimination, in domestic and global decision-making”. Informal consultations and public relations exercises to polish the UN’s image are not enough. The UN needs to lead by example through innovations in participation.

Our campaign calls for the creation of a World Citizens’ Initiative on the occasion of the UN’s 75th anniversary. This new and innovative instrument will enable global citizens to submit proposals to the General Assembly or the Security Council if they manage to collect sufficient support from fellow citizens across the world within a specified time.

Similar participatory mechanisms already exist in many cities, regions and countries worldwide. A powerful example is the European Citizens’ Initiative, the first transnational tool of modern direct democracy. It helps to understand how a World Citizens’ Initiative could function.

Certainly, many technical details need to be discussed and political will mobilized. Still, we emphasize that a World Citizens’ Initiative is feasible and that the UN and member states will be able to overcome all challenges if they are actually interested in the participation of “We the Peoples.”

We are convinced that the UN, member states, civil society and global citizens alike will benefit from the direct link a World Citizens’ Initiative will establish, and that its creation will represent an important step forward for the UN.

Clearly, a World Citizens’ Initiative is a proposal that is complementary to other important efforts such as the inclusion of major groups and civil society in the UN’s work or the establishment of a United Nations Parliamentary Assembly.

The World Citizens’ Initiative is a proposal that is in line with the concept of people-centered multilateral cooperation in a spirit of global citizenship and it is in line with the Universal Declaration of Human Rights, among others6 . It may be a key element in the long-sought revitalization of the General Assembly.

We urge the UN and member states to study the proposal and to launch open and inclusive preparations for the creation of a UN World Citizens’ Initiative. Civil society groups and individual citizens are invited to join the campaign and help us build the necessary political momentum and public pressure for transformation.

Andreas Bummel is Executive Director of Democracy Without Borders. Lysa John is Secretary-General of CIVICUS. Bruno Kaufmann is co-president of the Global Forum on Modern Direct Democracy and board member of Democracy International.

Article: A UN Parliament gains support in an age of divisive political leaders
A long standing proposal for the creation of a UN Parliamentary Assembly (UNPA) is slowly gathering momentum.
Article: Call to action on the creation of a UN parliamentary assembly
An international group of MPs calls for a body to strengthen the democratic representation of the world’s citizens in global affairs and the UN’s decision...
Article: Parliament must declare a climate emergency – not ignore it
To avoid climate catastrophe, we must go beyond what is considered politically possible. A Green New Deal would mobilise resources on a scale...
Blog: European governments are protecting big business over victims of human rights abuses
World leaders will meet in Geneva next week to start negotiating a new international law to ensure companies respect human rights and the environment in...
Article: How the United Nations should respond in the age of global dissent
The peoples of the world need the United Nations more than at any time since 1945. It must not allow itself to remain mainly as a vehicle for the...
Printer-friendly version