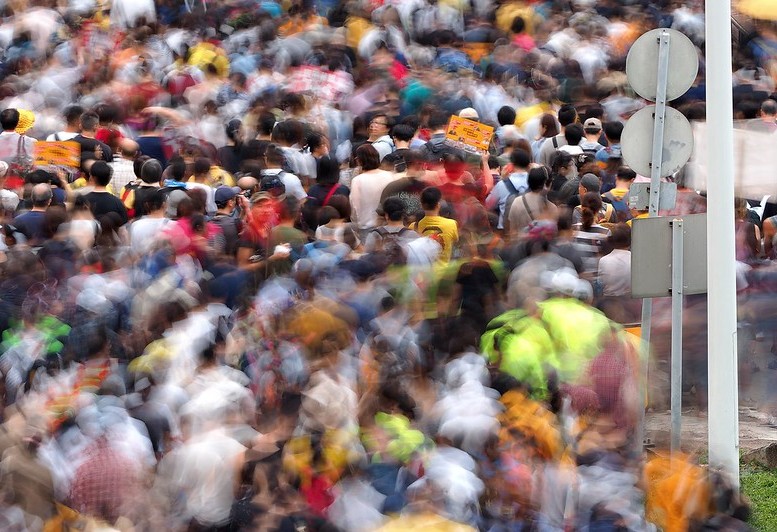 We are witnessing the biggest surge in global protest activity since the early 2010s, when a "movement of the squares" saw mass rallies in capital cities across the Arab world, followed by Occupy demonstrations in the global north, writes Jack Shenker.

"I’m 22 years old, and this is my last letter,” the young man begins. Most of his face is masked with black fabric; only his eyes, tired and steely, are visible below a messy fringe. “I’m worried that I will die and won’t see you any more,” he continues, his hands trembling. “But I can’t not take to the streets.”

The nameless demonstrator – one of many in Hong Kong who have been writing to their loved ones before heading out to confront rising police violence in the city – was filmed by the New York Times last week in an anonymous stairwell. But he could be almost anywhere, and not only because the walls behind him are white and characterless, left blank to protect his identity.

From east Asia to Latin America, northern Europe to the Middle East, there are young people gathering in stairwells, back alleys and basements whose faces display a similar blend of exhilaration and exhaustion. “The disaster of ‘chaos in Hong Kong’ has already hit the western world,” the former Chinese diplomat Wang Zhen declared in an official Communist party paper, following reports that protesters in Catalonia were being inspired by their counterparts in Hong Kong. “We can expect that other countries and cities may be struck by this deluge.”

Wang is right about the deluge. In the same week that those seeking independence from Spain occupied Barcelona airport and brought motorways to a standstill, Extinction Rebellion activists seized major bridges and squares across London, prompting nearly 2,000 arrests. Both mobilisations adopted tactics from Hong Kong, including fluid targets – inspired by Bruce Lee’s famous “be water“ mantra – and a repertoire of hand signals to outwit security forces.

Meanwhile Lebanon has been convulsed by its largest demonstrations in two decades, dozens have been killed during anti-government marches in Iraq, and in Egypt a blanket ban on dissent by President Abdel Fatah al-Sisi’s brutal dictatorship failed to prevent sporadic anti-regime protests breaking out across the country late last month. In the Americas, where Wang once served as a Chinese government envoy, Ecuador, Chile and Haiti are all experiencing citizen uprisings that are virtually unprecedented in recent history, ushering vast numbers of people into the streets – as well as soldiers tasked with containing them.

Each of these upheavals has its own spark – a hike in transport fares in Santiago, or a proposed tax on users of messaging apps like WhatsApp in Beirut – and each involves different patterns of governance and resistance. The class composition of the indigenous demonstrators in Ecuador can’t be compared with most of those marching against the imprisonment of separatist leaders in Catalonia; nor is the state’s prohibition of protest in London on a par with the repression in Hong Kong, where officers shot live ammunition into a teenager’s chest.

And yet it’s clear that we are witnessing the biggest surge in global protest activity since the early 2010s, when a “movement of the squares” saw mass rallies in capital cities across the Arab world, followed by Occupy demonstrations in the global north. Historically speaking, the past decade has seen more protests than at any time since the 1960s. Despite their disparate grievances, some common threads do bind today’s rebellions together. Tracing them may help clarify the nature of our present political volatility.

One obvious link is also the most superficial: the role played by social media, which has been widely noted in the press. While it’s true that digital technologies have enabled more agile and horizontal forms of organising, the ubiquity of these tools in 2019 tells us almost nothing about what is driving people to take to the streets in the first place. Indeed, in many states, social media is now an instrument of state repression as much as it is a tool of revolt.

The most significant connection is generational. The majority of those protesting now are the children of the financial crisis – a generation that has come of age during the strange and febrile years after the collapse of a broken economic and political orthodoxy, and before its replacement has emerged.

One direct impact of the crash has been a rapid diminishment of opportunity for millions of young people in rich countries – who now regard precarious work and rising inequality as the norm. At the same time, the aftermath of the crash has cracked the entrenched structures that had evolved to detach citizens from active participation in politics – be that through authoritarian systems or via an institutional consensus on the inevitability of market logic and technocratic management. Amid widespread economic and social failure, it has become harder than ever for elites to justify power, even on their own terms.

All this has produced a generation charged with hopelessness and hope. Afflicted by what the anthropologist David Graeber calls “despair fatigue”, protesters are putting their bodies on the line because it feels as if they have no other choice – and because those who rule over them have rarely seemed more vulnerable. Most have spent their lives under the maxim “there is no alternative” – and now circumstances have forced them to widen their political imaginations in search of something new. As one poster proclaims in Chile: “It’s not about 30 pesos, it’s about 30 years.”

Facing them down are states determined to put citizens back in their box and reseal the borders of political participation. The problem for governments is that there is no longer an established centre ground to snap back to, and their opponents know it – which is why so many of those involved in the current mobilisations will not settle for token concessions from the authorities.

“We need a whole new system, from scratch,” declared one demonstrator in Lebanon. The crackdown on Catalan separatists by the Spanish government has brought back dark memories of the state’s dirty war in the Basque country in the 1980s and the Franco era that preceded it; troops are marching through city centres in Chile for the first time since Pinochet.

In China, Xi Jinping has claimed that any attempt to divide the nation will result in “bodies smashed and bones ground to powder”. In many places, grassroots victory – and radical political transformation – feels to many like the only possible resolution, lending clashes an “all or nothing” antagonism and urgency that is hard to roll back.

What has intensified this urgency is the backdrop of looming ecological catastrophe. Even where protests are not explicitly about environmental concerns, the prospect of planetary catastrophe in our lifetimes raises the stakes for all political action. “The kids who are walking out of school have a hugely radical understanding of the way that politics works, and they recognise that our democratic processes and structures as they stand are designed to uphold the status quo,” Jake Woodier, one of the organisers behind the UK climate strike movement, told me this year. “They know that they will be worse off than their parents, know that they’ll never own a home, and know that on current trends they could live to see the end of humanity. So for them, for us, politics is not a game, it’s reality, and that’s reflected in the way we organise – relentlessly, radically, as if our lives depend on it.”

The Cambridge political scientist Helen Thompson once argued: “The post-2008 world is, in some fundamental sense, a world waiting for its reckoning.” That reckoning is beginning to unfold globally. They may come from different backgrounds and fight for different causes, but the kids being handcuffed, building barricades, and fighting their way through teargas in 2019 all entered adulthood after the end of the end of history. They know that we are living through one of what the American historian Robert Darnton has called “moments of suspended disbelief”: those rare, fragile conjunctures in which anything seems conceivable, and – far from being immutable – the old rules are ready to be rewritten. As long as it feels like their lives depend on winning, the deluge will continue.

Jack Shenker is a writer based in London and Cairo, and a former Egypt correspondent for the Guardian. His latest book is Now We Have Your Attention.

Jack Shenker is a writer based in London and Cairo. His latest book is Now We Have Your Attention

News: Protests around the world: Politicians must address ‘growing deficit of trust’, urges Guterres
Recent protests in cities across the world show that “people are hurting and want to be heard” by political leaders who must now address a “growing...
Report: Heralding Article 25: A people's strategy for world transformation
After so many years of political inaction only the massed goodwill of ordinary people can bring about an end to poverty in a world of plenty through...
Page: Join our campaigns for Article 25
Find out more information about our current campaigning initiatives and events. You can sign up to join us on demonstrations for Article 25; download...
Blog: Chile learns the price of economic inequality
Protesters are demanding a larger share of the nation’s prosperity — a reality check for its celebrated economic model. There is no alternative to simply...
Printer-friendly version