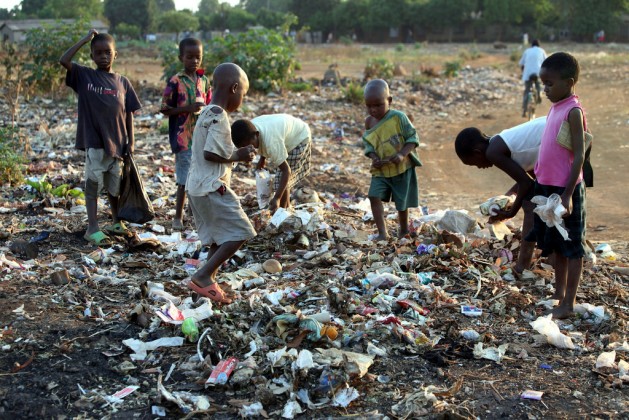 The World Bank claims poverty is decreasing around the world but UN research shows it depends on what you measure. If we are serious about reducing poverty, we need to start by properly identifying it.

The World Bank has repeatedly claimed that extreme poverty is on the decline. In its Poverty and Shared Prosperity Report, it states that ’the world has made tremendous progress in reducing extreme poverty. The percentage of people living in extreme poverty globally fell to a new low of 10 percent in 2015 — the latest number available — down from 11 percent in 2013, reflecting continued but slowing progress. The number of people living on less than $1.90 a day fell during this period by 68 million to 736 million.’

What are we measuring?

The World Bank’s extreme poverty line of US$1.90 a day is in fact not based on real estimates of people’s cost of living within countries. This explains why it fails to capture the desperation experienced by so many.

As soon as we focus on people’s lived experience, the picture becomes more stark. At a most intuitive level, we know that poverty is determined by a person’s inability to meet their material needs. Perhaps the most basic of these needs is food. The UN’s 2018 figures on hunger show that it is on the rise globally.  It estimates that 821 million people are currently going hungry. It is striking then that the World Bank considers millions of those living in hunger as living above its poverty line.

The World Bank also estimates extreme poverty in Latin America, at 4.1%, to be low, and suggests it has been declining over the last years. Meanwhile, the UN Economic Commission for Latin America and the Caribbean’s (ECLAC) 2018 figures indicate that both poverty (29.6%) and extreme poverty (10.2%) have been increasing since 2012.

ECLAC defines its poverty and extreme poverty lines based on the costs of food and other essential goods and services. While the World Bank claims that extreme poverty has nearly been eradicated in the region, ECLAC figures show that nearly a third of people in Latin America are unable to cover the costs of basic goods and services, and one in 10 cannot even afford the basic costs of food.

So what is the World Bank’s poverty line based on? The US$1 a day indicator was set out in the World Bank’s 1990 World Development Report. While the ‘dollar a day marker’ was easily understandable to the public, it was primarily symbolic and not based on any estimate of the income people would need to live on. The poverty line has since been updated according to inflation and changes to the consumer price index, and it currently stands at US$1.90 for the poorest countries. The Bank did develop additional poverty lines for lower-middle and upper-middle income countries, at US$3.20 and US$5.50 a day, largely to reflect higher prices in those countries.

If it is broken, fix it

The  arbitrary nature of the Bank’s approach to poverty measurement has critics abound and many have identified the need to move towards a basic needs approach. This would define the amount of money needed to cover food, housing, and other essential goods and services, including health and education.

It is estimated that if the Bank were to measure poverty on the basis of needs, international poverty rates would be considerably higher. The Bank has resisted such a call, arguing that the US$1.90 poverty line is valid and meaningful as it corresponds to the median of the national poverty lines of the world’s poorest countries.

The Atkinson Commission on Global Poverty, which was set up to advise the Bank on global poverty measurement, set out several recommendations to improve its poverty monitoring and measurement. It recommended that the World Bank partner with other agencies to construct a basic needs estimate of poverty. This is entirely feasible and some regional agencies are already successfully doing it. Nevertheless the Bank argued against it, putting the onus for adopting a more accurate approach on individual countries and preventing the development of internationally comparable estimates.

The Bank’s own Acting Director for Research Francisco Ferreira recently conceded, ‘there is significant room for arbitrary decision making’ in setting the World Bank’s international poverty estimates. He went on to argue that correcting against such arbitrary consequences is unfeasible as the Sustainable Development Goals’ (SDGs) poverty reduction target is based on World Bank poverty measures. For an international institution to argue that an inaccurate measure should be maintained because the international community is using it, highlights a profound lack of ambition and responsibility-taking.

The World Bank, and the greater international community, should not fear changing a measure that is not working. In fact, it is necessary in order to achieve the Bank’s stated goal of poverty reduction.

Under-reporting poverty does not make it go away. Rather, inaccurate indicators make it harder to identify the policies that truly address it, such as raising wages, reducing precarious work, extending social protection coverage and enhancing access to essential public services such as health and education.

It is high time the World Bank moves away from an arbitrary indicator towards one that captures the cost of living, based on the real needs of people.

Sharan Burrow is General Secretary of the International Trade Union Confederation (ITUC), which brings together 331 national trade union centres, and represents 207 million members. The ITUC is a regular interlocutor of the World Bank’s and Ms. Burrow has been on numerous high level panels with the World Bank.

Article: The IMF and the World Bank: 75 years on
A decade after the financial crisis shook the foundations of the global financial system, the Bretton Woods Institutions face an uncertain future. The...
Article: World bank poverty figures: what do they mean?
The World Bank's revised international poverty line of $1.25, which on many counts reveals a negligible difference in reducing poverty since 1981, raises...
News: World Bank reports slower progress on extreme poverty
The war in Syria and a population surge in sub-Saharan Africa have undermined efforts to reduce the number of people living in extreme poverty, the World...
Blog: Public-private partnerships don't work. It's time for the World Bank to take action.
This week, executive directors of the World Bank were handed a letter signed by more than 80 civil society organizations and trade unions from around the...
Printer-friendly version