In a “world of plenty,” G7 must fight famine 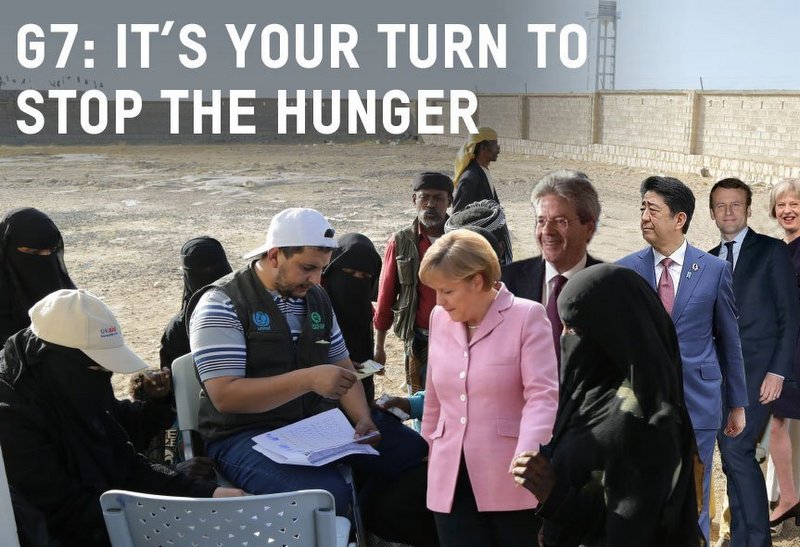 World leaders must step up and take action in fighting famine to prevent further catastrophic levels of hunger and deaths, said Oxfam. Ahead of the 43rd G7 summit, Oxfam urged world leaders to urgently address the issue of famine, currently affecting four countries at unprecedented levels.

“Political failure has led to these crises – political leadership is needed to resolve them…the world’s most powerful leaders must now act to prevent a catastrophe happening on their watch,” said Oxfam’s Executive Director Winnie Byanyima. “If G7 leaders were to travel to any of these four countries, they would see for themselves how life is becoming impossible for so many people: many are already dying in pain, from disease and extreme hunger,” she continued.

After descending into conflict over three years ago, famine has now been declared in two South Sudan counties and a third county is at risk if food aid is not provided. In Somalia, conflict alongside prolonged drought – most likely exacerbated by climate change – has left almost 7 million in need of humanitarian assistance. Drought has also contributed to cholera outbreaks and displacement.

Byanyima pointed to the hypocrisy in a “world of plenty” experiencing four famines. These widespread crises are not confined to the four countries’ borders.

According to the UN Refugee Agency, almost 2 million South Sudanese have fled to neighboring countries, including Uganda, Ethiopia, and Kenya, making it the world’s fastest growing refugee crisis. Due to the influx of South Sudanese refugees, the Bidi Bidi refugee camp in Uganda is now the largest in the world, placing a strain on local services. Escaping hunger and conflict, Nigerians have sought refuge in the Lake Chad region which shares its borders with Cameroon, Chad, and Niger only to once again face high levels of food insecurity and disease outbreaks.

Among the guest invitees to the G7 meeting are the affected nations, including the governments of Ethiopia, Kenya, and Nigeria. Oxfam called on the G7 countries to provide its fair share of funding. So far, they have provided 1.7 billion dollars, just under 60 percent of their fair share. Meanwhile, only 30 percent of a 6.3-billion-dollar UN appeal for all four countries has been funded. If each G7 country contributed its fair share, almost half of the appeal would be funded, Oxfam estimates.

In 2015, the G7 committed to lift 500 million people out of hunger and malnutrition. Oxfam noted that they should thus uphold their commitments and focus on crisis prevention. However, some of the G77 nations’ actions do not bode well for accelerated action on famine.

For instance, the U.S. government has proposed significant cuts to foreign assistance, including a 30 percent decrease in funding for the U.S. Agency for International Development (USAID). The proposal also includes the elimination of Title II For Peace, a major USAID food aid program, which would mean the loss of over 1.7 billion dollars of food assistance. Former US Foreign Disaster Assistance chief Jeremy Konyndyk noted that the cuts are “catastrophic.” “So bad I fear I’m misreading it,” he added.

International Rescue Committee’s (IRC) President David Miliband highlighted the importance of continuing U.S. foreign assistance in order to alleviate humanitarian suffering abroad and protect the interests and security of the U.S. and its allies. “Global threats like Ebola and ISIS grow out of poverty, instability, and bad governance. Working to counteract these with a forward-leaning foreign aid policy doesn’t just mean saving lives today, but sparing the US and its allies around the world the much more difficult, expensive work of combating them tomorrow,” he stated.

President Trump is expected to announce whether the U.S. will remain in the Paris climate agreement after the G7 summit.

“History shows that when donors fail to act on early warnings of potential famine, the consequence can be a large-scale, devastating loss of life….now clear warnings have again been issued,” Oxfam stated. “The international community have the power to end such failures—if they choose to—by marshaling international logistics and a humanitarian response network to work sustainably with existing local systems to prevent famine and address conflict, governance, and climate change drivers,” Oxfam concluded.

Filed under:
Poverty and hunger, Global governance, War and conflict

Report: Oxfam inequality guide
This new guide by Oxfam is about inequality in all its forms. It contains practical advice on how to find and use reliable data on inequality in advocacy...
Article: Famine looms in four countries as aid system struggles to cope, experts warn
Famine is looming in four different countries, threatening unprecedented levels of hunger and a global crisis that is already stretching the aid and...
Article: It’s time to reawaken the spirit of Occupy for the starving millions
How is it possible that so many people still die from severe malnutrition and lack of access to basic resources in the 21st century? The time has come for...
Blog: Oxfam’s latest bombshell on how unequally the world’s wealth is shared
Twitter feeds and newspaper headlines were again dominated this morning by new statistics on growing wealth inequality, as released by Oxfam ahead of this...
Printer-friendly version