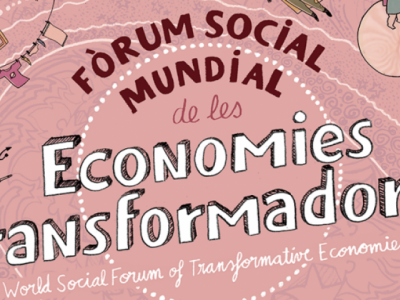 The World Social Forum of Transformative Economies is the process of convergence of different local and international movements from the alternative economy, which we call transformative economies.

This campaign seeks to deliver public visibility and recognition of transformative economy projects, as well as providing an alternative narrative to challenge hegemonic capitalist discourse, as was announced at the last World Social Forum of Salvador de Bahia by XES, RIPESS and REAS.

The main objective of this process is to bring together social movements and projects which share the will to put people and the environment at the centre of the economy, to put an end to an economy based on extraction, growth, competition and the market, and to struggle towards collaborative, resilient societies which develop and reinforce strategic alliances and actions through working together.

​The WSFTE seeks to unite forces among existing practices and processes of convergence that are already underway, in order to build together an inclusive global agenda which asserts that another world already exists!