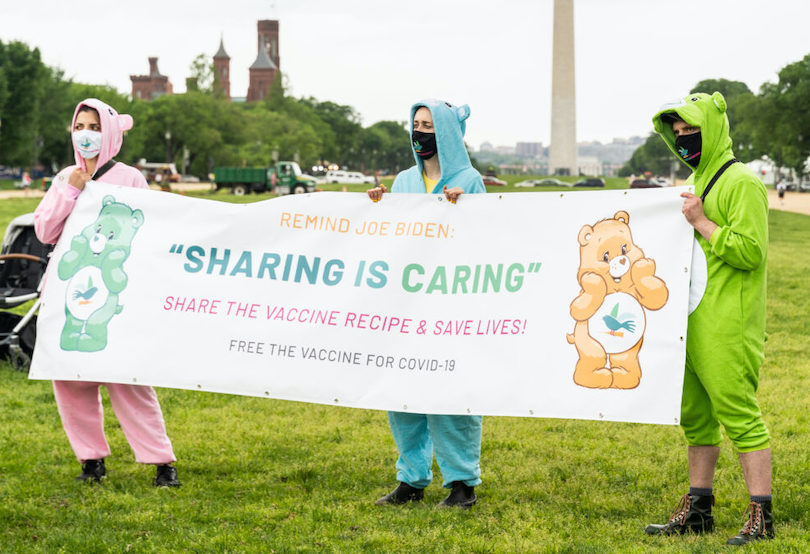 More than three million people across the globe have died of Covid-19 in the roughly nine months since India and South Africa first proposed a temporary patent waiver for coronavirus vaccines, a popular measure that Germany, the United Kingdom, Canada, and other rich countries have blocked. By Jake Johnson for Common Dreams.

According to an analysis released by the U.K.-based advocacy group Global Justice Now, 3.08 million people have succumbed to the coronavirus since members of the World Trade Organization began considering the patent waiver in October, when the pandemic death toll stood at just over a million. Earlier this month, the global death toll surpassed four million.

More than 100 WTO member countries—including the United States—have backed the patent waiver, along with hundreds of civil society organizations, Nobel Prize-winning economists, intellectual property scholars, and the head of the World Health Organization.

But because the WTO operates by consensus, several powerful rich countries have been able to thwart the patent waiver push, leaving pharmaceutical companies in control of vaccine manufacturing even as it has become abundantly clear that current production levels are not sufficient to meet global needs.

"Millions have died while the governments of rich countries have been bickering over monopoly rights for Covid-19 vaccines," said Nick Dearden, the director of Global Justice Now. "Every one of those deaths is a mark of shame for the governments of countries like the U.K. and Germany who have protected patents over human lives."

Global Justice Now's figures come as the WTO General Council, the organization's highest-level body, is set to convene in Geneva on Tuesday and Wednesday to discuss the status of patent waiver talks, which have gone virtually nowhere since the U.S. belatedly endorsed the proposal in May.

Negotiators are asking for more time to hammer out a potential intellectual property agreement as the WTO is set to break for vacation in the month of August. The WTO's TRIPS Council—the body tasked with monitoring global intellectual property rules—is not set to formally meet again until mid-October, a nearly three-month gap in the talks as the Delta variant continues to wreak havoc in undervaccinated regions.

Global Justice Now noted that nearly a million people have died of Covid-19 over the past three months.

"It beggars belief that governments could delay progress for another three months," said Dearden. "The virus is ravaging the world's poorest while rich governments buy booster shots and vaccinate low-risk groups. Extreme vaccine inequality will be never-ending unless we remove the corporate monopolies which are preventing the world from ramping up production."

"Britain has thrown more vaccines in the bin than it has donated or exported to date," he continued. "No wonder most countries don't trust the rich world to deal with Covid-19. At the very least, it's time we got out of the way and allowed countries to make their own jabs. Many of the deaths we mourn today could have been prevented if not for the shameful intransigence of governments like our own."

The WTO General Council is expected to adopt a report this week indicating that little progress has been made toward a final agreement on the patent waiver, which has been co-sponsored by Mozambique, Kenya, Indonesia, Namibia, and other nations struggling to gain access to vaccine doses as the highly transmissible Delta strain tears through their populations.

Namibia, which has one of the highest Covid-19 death rates in the world, has thus far been able to provide a single vaccine dose to just 1% of its population.

Lori Wallach, director of Public Citizen's Global Trade Watch division, blasted the WTO for preparing to shut down for six weeks of vacation while "monopoly protections for pharmaceutical corporations remain an obstacle to scaling up the production of vaccines, tests, and treatments needed to beat Covid."

"The Delta variant is burning a murderous path through a world where most people are literally dying for a vaccine but there simply is no supply," Wallach said in a statement Tuesday. "Until the WTO intellectual property barriers are waived, and governments force technology transfer and fund major new manufacturing capacity so the needed vaccines are made to inoculate the world, it will be one variant after another getting hatched."

News: Global south-led vaccine summit eyes new tech-sharing platform
Global South states commit to share Covid-19 vaccine technology and production at a four-day 'Summit for Vaccine Internationalism'.
News: G7 rejects pleas to fund Covid jabs for poor countries, despite Boris Johnson's 'vaccinate the world' pledge
G7 leaders have rejected pleas to find billions of pounds to end Covid jab shortages in poor countries, despite Boris Johnson making a plan to "vaccinate...
News: Covid vaccine: WHO warns of 'catastrophic moral failure'
The world faces a "catastrophic moral failure" because of unequal Covid vaccine policies, the head of the World Health Organization (WHO) has warned.
News: Covid vaccines create 9 new billionaires with combined wealth greater than cost of vaccinating world’s poorest countries
At least nine people have become new billionaires since the beginning of the COVID pandemic, thanks to the excessive profits pharmaceutical corporations...
News: Uniting behind a people’s vaccine against COVID-19
Over 100 former global leaders call for the mandatory worldwide sharing of a Covid19 vaccine - available to all people, in all countries, free of charge.
Blog: The world needs a 'people's vaccine' for coronavirus, not a big-pharma monopoly
No private company should have monopoly rights over a Covid-19 vaccine; this is a public resource that should be contributed to the World Health...
Blog: The G7 must act to end ‘vaccine apartheid’ or everyone in the world will suffer
The pandemic has uncovered unpalatable truths about global injustices and inequalities. We are challenged to see health as a universal common good, not a...
Printer-friendly version