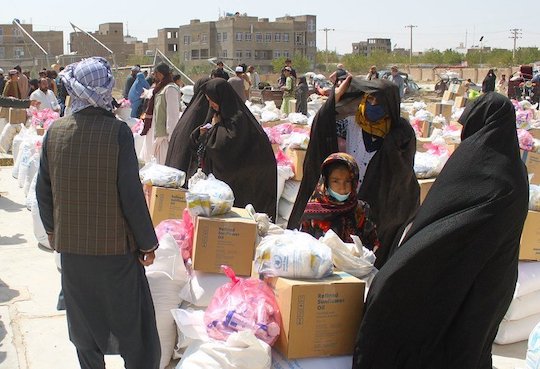 People in Afghanistan are today facing a food insecurity and malnutrition crisis of “unparalleled proportions”, according to the UN Resident and Humanitarian Coordinator.

Ramiz Alakbarov, who also serves as Deputy Special Representative, issued a statement saying that acute hunger in the country rose from 14 million in July, to 23 million in March, forcing households to resort to “desperate measures” to put food on the table.

“Unacceptable trade-offs have caused untold suffering, reduced the quality, quantity, and diversity of food available, led to high levels of wasting in children, and other harmful impacts on the physical and mental wellbeing of women, men, and children,” he spelled out.

A staggering 95 per cent of Afghans are not getting enough to eat, with that number rising to almost 100 percent in female-headed households, according to the UN Resident Coordinator, who is also deputy head of the UN assistance mission, UNAMA.

“It is a figure so high that it is almost inconceivable. Yet, devastatingly, it is the harsh reality,” he said.

Mr. Alakbarov painted a picture of hospital wards filled with malnourished children, many weighing at age one what an infant of six months would weigh in a developed country, with some “so weak they are unable to move”.

As Afghanistan continues to grapple with the effects of a terrible drought, the prospect of another bad harvest this year, a banking and financial crisis so severe that it has left more than 80 per cent of the population facing debt, and an increase in food and fuel prices, the UN official attested, “we cannot ignore the reality facing communities”.

“Enormous challenges lie ahead,” he said, reiterating that the UN and partners, are “doing everything we can” to alleviate the impacts of hunger and malnutrition, while giving communities the means to protect and sustain their livelihoods in the future.

So far this year, humanitarian partners have supported 8.2 million people with life-saving and life-sustaining food assistance, including emergency food rations, school meals, agricultural supplies and nutritious foods and supplements for nursing mothers and their infants.

Over the next months, the UN and its partners will continue to focus on scaling-up response activities, reaching previously underserved and remote areas that active conflict had rendered inaccessible.

Acute malnutrition rates in 28 out of 34 provinces are high with more than 3.5 million children in need of nutrition treatment support, said Dr. Alakbarov.

He explained that since mid-August, over 2,500 nutrition treatment sites across all 34 provinces, both urban and rural, have been serving 800,000 acutely malnourished children, “and we plan to reach 3.2 million affected children this year”.

“We also aim to reach one million people through vocational skills training, one million children through school feeding, and millions more people both directly and indirectly through programmes that will protect and boost the agricultural livelihoods upon which so much of the population depends,” added the UN Representative.

Although a massive humanitarian response mounted since August has prevented “our worst fears from being realized over the winter,” Dr. Alakbarov reminded that food insecurity and malnutrition remain “at historic highs” and require an “immediate, sustained, and large-scale humanitarian response.”

On 31 March, the UN, United Kingdom, Germany and Qatar will co-host an international pledging conference in support of the humanitarian response.

“The fate of an entire generation of Afghans is at stake,” he said, assuring that the UN would continue, over the coming weeks, to provide regular updates.

While acknowledging that humanitarian assistance alone is not enough to address today’s or tomorrow’s challenges, he underscored that “it is absolutely necessary to keep people alive and healthy, and to prevent vulnerable people in the most precarious situations from sliding ever further into need”.

“As we collectively support millions of Afghans to rebuild their lives and communities, we must remember that the long road to a better future is impossible on empty stomach,” he said.

News: ‘Take from the hungry to feed the starving’: UN faces awful dilemma
Agencies forced to cut back aid in Yemen, Afghanistan, South Sudan and Ethiopia despite growing need as funds go to Ukraine.
Article: 6 in 7 people worldwide experience ‘high levels of insecurity’ – Why?
Safety and security are at the base of the ‘hierarchy of needs’ pyramid, second in importance only to life’s absolute necessities—air, water, food and...
News: UN food agency says 13 million Yemenis may face starvation
The head of the U.N. food agency has warned that 13 million Yemenis are headed for starvation due to a protracted civil conflict and a lack of funding for...
Report: Food insecurity soaring across 20 hunger hotspots
According to the Hunger Hotspots Report from the World Food Programme and Food and Agriculture Organization, Ethiopia, Nigeria, South Sudan and Yemen...
Article: An enquiry into the meaning of sharing food
If we are concerned about stopping the enduring crime of starvation amidst plenty, we cannot restrict our actions to the level of our own country or...
Printer-friendly version