COP27 closes with deal on loss and damage: ‘A step towards justice’, says UN chief 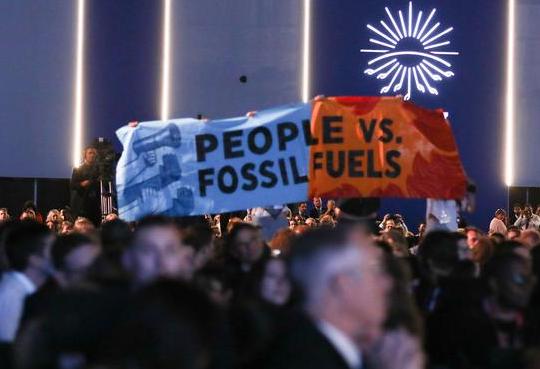 After days of intense negotiations that stretched into early Sunday morning in Sharm el-Sheikh, countries at the latest UN Climate Change Conference, COP27, reached agreement on an outcome that established a funding mechanism to compensate vulnerable nations for ‘loss and damage’ from climate-induced disasters.

“This COP has taken an important step towards justice. I welcome the decision to establish a loss and damage fund and to operationalize it in the coming period,” UN Secretary-General António Guterres said in a video message issued from the conference venue in Egypt, underscoring that the voices of those on frontlines of the climate crisis must be heard.

The UN chief was referring to what ended up becoming the thorniest issue at this COP, shorthand for the annual Conference of Parties to the UN Framework Convention on Climate Change (UNFCCC).

Developing countries made strong and repeated appeals for the establishment of a loss and damage fund, to compensate the countries that are the most vulnerable to climate disasters, yet who have contributed little to the climate crisis.

“Clearly this will not be enough, but it is a much-needed political signal to rebuild broken trust,” he underscored, stressing that the UN system will support the effort every step of the way.

Ahead of action on the texts, COP27 President Sameh Shoukry, who is also the Foreign Minister of Egypt, told delegations that the draft decisions were "a gateway that will scale up implementation and will enbale us to transform to future of climate future neutrality and climate resilient development."

“I call upon all of you to view these draft decisions not merely as words on paper but as a collective message to the world that we have heeded the call of our leaders and of current and future generations to set the right pace and direction for the implementation of the Paris agreement and the achievement of its goals.”

Mr. Shoukry added: “The world is watching, I call on us all to rise to the expectations entrusted to us by the global community, and especially by those who are most vulnerable and yet have contributed the least to climate change.”

After missing their Friday night deadline, negotiators were able to agree on a package of decisions that covered some of the most difficult items of the agenda, including a loss and damage facility – with a commitment to set up a financial support structure for the most vulnerable by the next COP in 2023 – as well as the post-2025 finance goal, and the so-called mitigation work programme, that would reduce emissions faster, catalyze impactful action, and secure assurances from key countries that they will take immediate action to raise ambition and keep us on the path towards 1.5°C.

Yet, while agreement on these issues was seen as a welcome step in the right direction, there appeared to be little forward movement on other key issues, particularly on the phasing out of fossil fuels, and tightened language on the need to limit global warming to 1.5 degrees Celsius.

Observers have warned that new language including “low emissions” energy alongside renewables as the energy sources of the future is a significant loophole, as the undefined term could be used to justify new fossil fuel development against the clear guidance of the UN Intergovernmental Panel on Climate Change (IPCC) and the International Energy Agency (IEA).

Mr. Guterres reminded the world of what remain the priorities regarding climate action, including the ambition to reduce global greenhouse gas emissions and keep alive the Paris Agreement’s 1.5 degree Celsius limit, and pull humanity “back from the climate cliff”.

“We need to drastically reduce emissions now – and this is an issue this COP did not address,” he lamented, saying that the world still needs to make a giant leap on climate ambition, and to end its addiction to fossil fuels by investing “massively” in renewables.

The UN chief also emphasized the need to make good on the long-delayed promise of $100 billion a year in climate finance for developing countries, establishing clarity and a credible roadmap to double adaptation funds.

He also reiterated the importance of changing the business models of multilateral development banks and international financial institutions.

“They must accept more risk and systematically leverage private finance for developing countries at reasonable costs,” he said.

Our planet is still in the emergency room

The UN chief said that while a fund for loss and damage is essential, it’s not an answer if the climate crisis washes a small island State off the map – or turns an entire African country into a desert.

He renewed his call for just energy transition partnerships to accelerate the phasing out of coal and scaling up renewables and reiterated the call he made on his opening speech at COP27: a climate solidarity pact.

“A Pact in which all countries make an extra effort to reduce emissions this decade in line with the 1.5-degree goal.  And a Pact to mobilize – together with international financial institutions and the private sector – financial and technical support for large emerging economies to accelerate their renewable energy transition,” he explained, underscoring that this is essential to keep the 1.5 degree limit within reach.

The UN chief also sent a message to civil society and activists which had been so vocal since the conference’s opening day: “I share your frustration”.

Mr. Guterres said that climate advocates – led by the moral voice of young people – have kept the agenda moving through the darkest of days and they must be protected.

“The most vital energy source in the world is people power. That is why it is so important to understand the human rights dimension of climate action,” he said, adding that the battle ahead will be tough and that “it will take each and every one of us fighting in the trenches each and every day…we can’t wait for a miracle.”

Echoing this sentiment, Kenyan environmental youth activist Elizabeth Wathuti, said: “COP27 may be over, but the fight for a safe future is not. It is now more urgent than ever that political leaders work to agree a strong global deal to protect and restore nature at the upcoming Global Biodiversity Summit in Montreal. “

Ms. Wathuti added: “The interconnected food, nature and climate crisis are right now affecting us all – but the frontline communities like mine are hardest hit. How many alarm bells need to be sounded before we act?”

In his video message, Mr. Guterres highlighted that COP27 concluded with “much homework” still to be done and little time in which to do it.

“We are already halfway between the [2015] Paris Climate Agreement and the 2030 deadline.  We need all hands on deck to drive justice and ambition,” he stated.

The Secretary-General added that this includes ambition to end the “suicidal war” on nature that is fuelling the climate crisis, driving species to extinction and destroying ecosystems.

“Next month’s UN Biodiversity Conference is the moment to adopt an ambitious global biodiversity framework for the next decade, drawing from the power of nature-based solutions and the critical role of indigenous communities,” he urged.

In his closing remarks, UNFCC Executive Secretary Simon Stiell, said: “At COP27… we’ve determined a way forward on a decade-long conversation on funding for loss and damage.” Among other positive steps, he said that in the text adopted Sunday morning, “we have been given reassurances that there is no room for backsliding. It gives the key political signals that indicate the phase-down of all fossil fuels is happening.”

The negotiations at COP27 had not been easy. “…Not been easy at all. But this historic outcome does move us forward and it benefits the vulnerable people around the world,” he stated.

And with that in mind, he said: “There is no need in putting ourselves through all that we have just gone through if we are going to participate in an exercise of collective amnesia the moment the cameras move on,” and called for all Parties and delegations to hold each other accountable for the decisions that had just been taken.

Mr. Stiell added that he would personally shepherd the drive forward on Nationally Determined Contributions, or NDCs, which are at the core of the Paris Agreement and embody efforts by each country to reduce national emissions and adapt to the impacts of climate change.

He went on to say that civil society should take significant credit for bringing the international community to this historic moment in the combat against climate change.

“Without the voices of individuals, whether they are activists, scientists, researchers, youth or indigenous peoples we would not have gotten this far…your voices have a direct impact on the way we find our way forward at the multilateral level.”

The highlights of the meeting included, among others, the launch of the first report of the High-Level Expert Group on the Net-Zero Emissions Commitments of Non-State Entities.

The report slammed greenwashing – misleading the public to believe that a company or entity is doing more to protect the environment than it is – and weak net-zero pledges and provided roadmap to bring integrity to net-zero commitments by industry, financial institutions, cities and regions and to support a global, equitable transition to a sustainable future.

Also during the Conference, the UN announced the Executive Action Plan for the Early Warnings for All initiative, which calls for initial new targeted investments of $ 3.1 billion between 2023 and 2027, equivalent to a cost of just 50 cents per person per year.

Meanwhile, former US Vice-President and climate activist Al Gore, with the support of the UN Secretary-General, presented a new independent inventory of greenhouse gas emissions created by the Climate TRACE Coalition.

The tool combines satellite data and artificial intelligence to show the facility-level emissions of over 70,000 sites around the world, including companies in China, the United States and India. This will allow leaders to identify the location and scope of carbon and methane emissions being released into the atmosphere.

Another highlight of the conference was a so-called master plan to accelerate the decarbonization of five major sectors – power, road transport, steel, hydrogen, and agriculture – presented by the COP27 Egyptian Presidency.

The Egyptian leadership also announced launched the Food and Agriculture for Sustainable Transformation initiative or FAST, to improve the quantity and quality of climate finance contributions to transform agriculture and food systems by 2030.

This was the first COP to have a dedicated day for Agriculture, which contributes to a third of greenhouse emissions and should be a crucial part of the solution.

Report: The imperative of cooperation: Steps towards an equitable response to the climate crisis
A new report provides a global equity analysis of how climate pledges stack up against the Paris Agreement goal of limiting warming to 1.5°C.
News: Climate crisis needs cooperation between all nations - time is running out to save Earth
Media organisations worldwide have published a common view about the need for nations to cooperate, accept their moral responsibilities and fairly share...
News: Climate Clock erected at COP27 says richest nations owe $31.8 trillion... and counting
As world leaders gather at the United Nations Climate Change Conference, the Climate Clock team is displaying reminders of a looming deadline and just how...
Report: Rich countries falling billions short on ‘fair share’ of climate-finance goal
The US should be paying nearly $40bn towards the $100bn climate-finance target, new Carbon Brief analysis shows. This is $32bn more than the estimated $...
Report: The intersection of politics and spirituality in addressing the climate crisis
The following interview with STWR’s founder, Mohammed Sofiane Mesbahi, examines both the contemporary political and profounder spiritual implications of...
Printer-friendly version