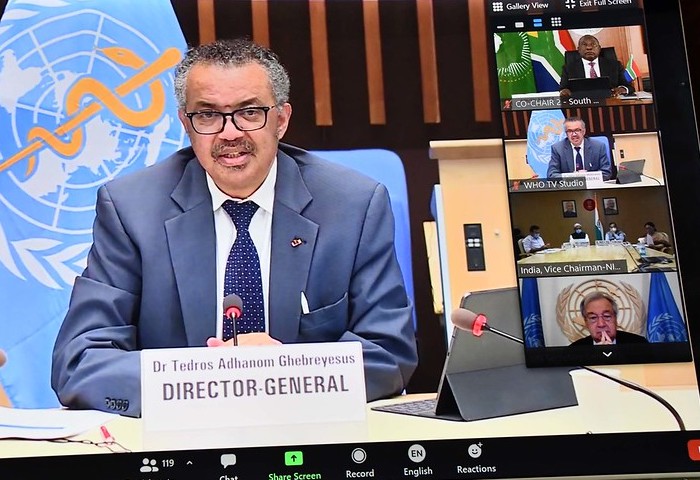 The world faces a "catastrophic moral failure" because of unequal Covid vaccine policies, the head of the World Health Organization (WHO) has warned.

Tedros Adhanom Ghebreyesus said it was not fair for younger, healthy people in richer nations to get injections before vulnerable people in poorer states.

He said over 39 million vaccine doses had been given in 49 richer states - but one poor nation had only 25 doses.

Meanwhile, both the WHO and China were criticised for their Covid response.

An independent panel commissioned by the WHO said the UN public health body should have declared an international emergency earlier, and also rapped China for not taking public health measures sooner.

So far, China, India, Russia, the UK and the US have all developed Covid vaccines, with others being made by multinational teams - like the American-German Pfizer vaccine.

Almost all of these nations have prioritised distribution to their own populations.

What did the WHO head say?

Speaking at a WHO executive board session on Monday, Dr Tedros said, "I need to be blunt: the world is on the brink of a catastrophic moral failure - and the price of this failure will be paid with lives and livelihoods in the world's poorest countries."

Dr Tedros said a "me-first" approach would be self-defeating because it would push up prices and encourage hoarding.

"Ultimately, these actions will only prolong the pandemic, the restrictions needed to contain it, and human and economic suffering," he added.

And the WHO head called for a full commitment to the global vaccine-sharing scheme Covax, which is due to start rolling out next month.

"My challenge to all member states is to ensure that by the time World Health Day arrives on 7 April, Covid-19 vaccines are being administered in every country, as a symbol of hope for overcoming both the pandemic and the inequalities that lie at the root of so many global health challenges," Dr Tedros said.

So far, more than 180 countries have signed up to the Covax initiative, which is supported by the WHO and a group of international vaccine advocacy groups. Its aim is to unite countries into one bloc so they have more power to negotiate with drug companies.

Ninety-two countries - all of them low or middle-income - will have their vaccines paid for by a fund sponsored by donors.

"We have secured two billion doses from five producers, with options of more than one billion more doses, and we aim to start deliveries in February," Dr Tedros said.

What has the response been?

Reacting to Dr Tedros' warning, UK Health Secretary Matt Hancock said: "The UK is the world's biggest supporter, financial supporter, of the global programme to ensure access to vaccines in all countries in the world."

Mr Hancock said the UK had "put the most financial support in these international efforts to ensure everybody has access to vaccines".

More than four million people in the UK have received their first dose of a coronavirus vaccine, according to government figures.

People in their 70s and the clinically extremely vulnerable in England are now among those being offered the jab.

Last month, the People's Vaccine Alliance coalition of campaigning bodies said that rich countries were hoarding doses of Covid vaccines and people living in poor countries were set to miss out.

It said that nearly 70 lower-income countries would only be able to vaccinate one in 10 people.

Canada, in particular, came in for criticism, with the coalition saying the North American nation had ordered enough vaccine doses to protect each Canadian five times.

In December, Karina Gould, Canada's minister of international development, denied allegations the country was hoarding vaccines, saying any discussion of a surplus was "hypothetical" as the doses had not been delivered.

What about the criticism of the WHO and China?

In their interim report, the panel of independent experts said both China and the WHO should have acted faster during the early stages of the coronavirus outbreak.

The document said that Beijing should have acted more forcefully to localise the initial outbreak in the city of Wuhan first detected in late 2019.

The experts also criticised the WHO for only declaring a global emergency on 30 January 2020.

"The global pandemic alert system is not fit for purpose," the report said. "The World Health Organization has been underpowered to do the job."

News: Covid-19 vaccines are being hoarded by rich countries - poor ones are missing out
Lost among the jubilation of vaccine rollouts in rich countries is an uncomfortable reality: The world's poorest countries will have to wait months and...
Blog: The world needs a 'people's vaccine' for coronavirus, not a big-pharma monopoly
No private company should have monopoly rights over a Covid-19 vaccine; this is a public resource that should be contributed to the World Health...
Blog: COVID-19 compounding inequalities
The COVID-19 pandemic has highlighted many existing inequalities, and may worsen divergence among countries. While the poor have struggled to survive, the...
News: Over 1,000 health professionals call for G20 to cancel developing countries’ debt
Over 1,000 health professionals from 66 countries have signed a letter urging the G20 to cancel the debt of developing countries, ahead of an...
News: Uniting behind a people’s vaccine against COVID-19
Over 100 former global leaders call for the mandatory worldwide sharing of a Covid19 vaccine - available to all people, in all countries, free of charge.
Printer-friendly version