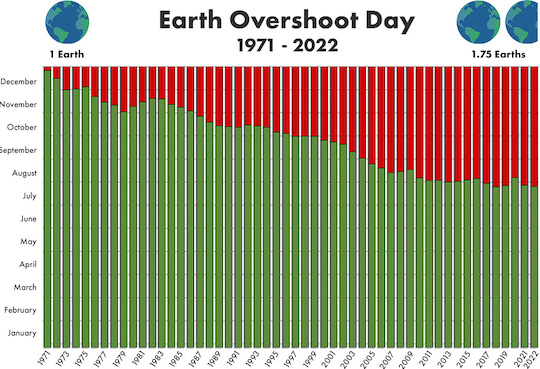 From today onwards, humanity is living on credit. Every year, Overshoot Day – the date by which humanity has consumed all the resources that Earth can sustainably produce in one year – arrives earlier.

While the date has been arriving earlier in the year for most of the past five decades, there have been some exceptions: In 2020, due to the repeated lockdowns imposed to manage the Covid-19 pandemic, Overshoot Day came on August 22.

The date is mainly symbolic and is considered useful by NGOs to measure the ecological impact of human activity, although the index is still little used in policymaking.

"The deficit is getting bigger and bigger, and yet there has been no real jolt to the political system," says Véronique Andrieux, director of the World Wildlife Fund (WWF) in France. "And any delays in the yearly date have been incidental, not intentional,” she observes. “We observed an improvement during oil shocks, the pandemic and financial crises.”

The Global Footprint Network has been calculating Overshoot Day since 1971 based on data from UN reports by cross-referencing the ecological footprint per person (the amount of surface area required for food, transportation, housing, etc.) with the world's biocapacity (the capacity of ecosystems to renew themselves) per person. Laetitia Mailhes, the NGO’s spokesperson, would like to see sovereign states use this index to measure other aspects of the ecological crisis.

The indicator varies considerably from one country to another. According to a list drawn up by the Global Footprint Network think tank, the worst performer for this year is Qatar, which had already reached its annual resource limit on February 10, followed closely by Luxembourg on February 14.

France reached this day on May 5. The date could be pushed forward by 25 days within just one presidential term if the French government were to implement more "ecological planning", according to the WWF.

At the global level, pushing forward Earth Overshoot Day by six days every year would allow us to reach the date of December 31 by 2050, explains the Global Footprint Network.

Since 2003, the think tank has been trying to raise public awareness. The hashtag #MoveTheDate calls on internet users to propose concrete solutions to move the date forward. The Global Footprint Network has also provided a platform for individuals to calculate their personal ecological fooprint since 2007.

For Andrieux, Overshoot Day presents a "robust and solid" methodology that goes beyond the carbon footprint. "We're not just talking about the climate crisis but also the ecological crisis as a whole, and in particular the collapse of biodiversity."

At present, however, few nations are using this indicator to guide policy. Only a few countries, such as Montenegro, base their sustainable development strategies on their ecological footprint. Some municipalities have also opted for this calculation method, including some 20 cities in Portugal.

Even though the Overshoot Day index has still not yet been widely adopted at the state governance level, this tool has proven its worth in raising public awareness for environmental issues. Bettina Laville, the honourary president of Comité 21, a French network made up of sustainable development actors, calls it "an extraordinary and extremely meaningful awareness-raising tool, which succeeds in making people aware in a concrete way of something that may seem abstract".

This article was adapted from the original in French.