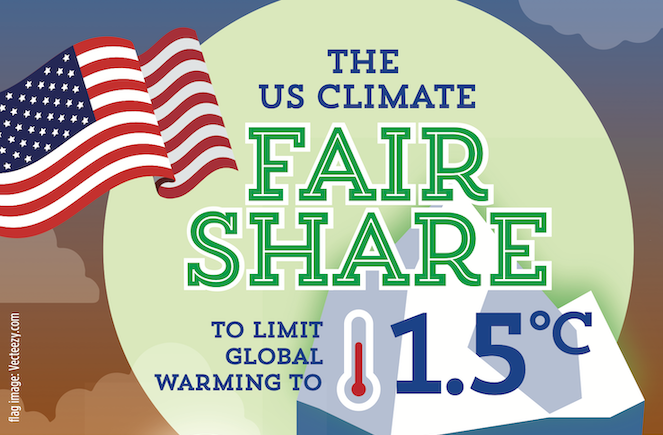 Civil society groups are ramping up their demand that the new Biden Administration commits to doing its fair share of emissions cuts and honours owed support for Global South countries, including climate finance. By the US Climate Fair Share.

Just days before the reentry of the United States into the Paris Agreement becomes official, environmental groups delivered the signatures of more than 50,000 people in the U.S. The signatures are the latest escalation in a growing call demanding that the Biden Administration commit to doing its fair share of emissions cuts and honor owed support for Global South countries, including climate finance. The petition reflects analysis released in December from the U.S. Climate Action Network (USCAN) that provides a path for the U.S. to take action that is in line with its responsibility for the climate crisis.

Earlier this month a similar coalition also demanded that the Biden administration commit $8 billion to the Green Climate Fund as well as further contributions to the Adaptation Fund. While the Biden transition team has yet to acknowledge the demand from this national coalition of people and organizations, incoming Climate Envoy John Kerry has spoken about the need for the US to do its fair share.

According to the analysis released by USCAN, for the U.S. to begin to do its fair share of the global action needed to help limit global warming to 1.5°C, it must reduce U.S. emissions 195% by 2030 (down from 2005 levels). To assemble this contribution, the analysis calls for U.S. domestic emissions reductions of 70% by 2030 combined with a further 125% reduction achieved by providing financial and technological support for emission reductions in Global South countries.

The Biden administration has enacted a flurry of climate executive orders and previously committed to a plan of net-zero by 2050. But announcements to achieve net zero have been met with criticism from climate groups and scientists for not being ambitious enough and relying on technologies and approaches that are unproven, dangerous, or not achievable at scale.

The extremely large U.S. fair share contribution partly reflects U.S. emissions to date. Today’s global warming is driven by cumulative emissions (not annual emissions), and the U.S. has already historically emitted more than any other country. In fact, many analyses deem that the U.S. has far surpassed its fair share of the cumulative global carbon budget for limiting warming to 1.5°C. The domestic reduction of 70% by 2030 recommended by USCAN roughly aligns with an extremely ambitious decarbonization via a prosperous economy-wide mobilization.

The fair share demand is one part of a larger framework prescribed by environmental groups called the Climate President Action Plan. The plan includes ten steps the administration can take to fulfill its promise to take bold steps on climate and rebuild trust abroad.

Brandon Wu, Director of Policy & Campaigns, ActionAid USA, said: “Just as domestic climate justice – a priority for the Biden administration – means a particular focus on historically marginalized communities, global climate justice means addressing legacies of exploitation and colonialism and their role in creating a tragically unjust climate crisis. People around the world are already suffering from devastating climate impacts, and many of those most vulnerable had little or no role in causing the problem. As the world’s largest historical climate polluter, the United States has a moral and legal responsibility to support those vulnerable communities. Doing our fair share of climate action means addressing the injustices we have visited on those communities – starting with providing real financial support for just and equitable climate action in developing countries.”

Rev. Michael Malcom, Executive Director of Alabama Interfaith Power & Light and the People’s Justice Council, and the US Climate Action Network’s elected representative to Climate Action Network-International emphasized: “Our country is one of the richest in the world and has to do more than everyone else to fix this problem. But let’s be clear. This is a problem caused by the rich, and the corporations they control. The US has to do its fair share and that responsibility has to be shouldered by the rich, not forced onto the working class and historically marginalized people.”

Jean Su, Energy Justice Director, Center for Biological Diversity. “After disproportionately polluting the planet for centuries, the United States must take its fair share of robust climate action on both the domestic and global stage. While President Biden’s climate executive order is a strong first step, declaring a climate emergency will call this crisis what it is and level up the legal tools for confronting it. Out of the devastation of the coronavirus and the Trump administration, the president must seize this singular chance to build back a just, clean energy system that tackles the climate crisis and the wretched racism embedded in it. The U.S. must help finance that same transition across the world in communities who have contributed the least to this climate emergency.”

Tasneem Essop, Executive Director, Climate Action Network, said, ” The question is very simple. Will the US under President Biden do its Fair Share in addressing the climate crisis? Having played an outsized role in historically fuelling the climate crisis and general obstructing climate progress in the international space, re-joining the Paris Agreement is a just a start and much more heavy lifting in terms of urgent action is needed. To do its Fair Share President Biden must commit to bold emissions cuts at home, being a good global citizen and supporting the global community in ensuring a just transition away from a fossil fuel economy. Now is the time to make these commitments clear to all. The world is watching.”

Sriram Madhusoodanan, Corporate Accountability U.S. Climate Campaign Director said, “The Biden administration has touted climate action, and it is time for them to walk the walk. With its reentry to the Paris Agreement, the U.S. must commit to honor the climate debt it owes to Global South countries, deeply cut emissions equitably at home, and stop undermining people-first solutions. What we’re calling for is not a return to the Obama years, it’s a complete realignment of the U.S.’s approach to climate diplomacy that puts people, not corporations, first.”

Tom Athanasiou, Executive Director, EcoEquity, said: “People have realized how great the climate danger really is. The bad news is that many still hope technology will save us. It will help, but the real secret is going to be cooperation. Real cooperation – within countries and between them – of a kind that’s only possible if everyone, and especially the rich, are seen as doing their fair share. It’s a big ask for the US, the wealthiest country the world has ever known, but there’s no avoiding it. If the Biden administration intends to kick-start a true climate mobilization, it has to do its global fair share even as it pursues a justice-first mobilization at home. There is no other way.

Sivan Kartha, Ph D., Stockholm Environment Institute, “This fair share demand recognizes not only the bedrock ethical principles of the international climate regime, but also the simple political reality that poorer countries, where most decarbonization efforts will ultimately need to occur, will be highly reluctant to take major actions unless and until they see the world’s most powerful country and its largest overall contributor to climate change doing it’s fair share..

Article: Global inequality in a time of climate emergency
Every national campaign for tackling climate change also needs an international justice plank, because we’re not going to get anywhere near the Paris...
Article: Only a global Green New Deal can save the planet
The Sanders plan for a Green New Deal recognizes that unprecedented international cooperation will be needed—with the US doing its fair share—if we’re to...
Report: 'Ecological Ponzi scheme' threatens to bring down humanity, scientists warn
Accelerating biodiversity loss, climate change and over-consumption are swiftly pushing human societies toward a “ghastly future” of growing hunger,...
Report: After Paris: countries are not paying their fair share
A review of climate targets and commitments by each country has been released during the UN climate conference in Poland.
Article: 'Footprint Justice' and 'Fair Earth Shares' is getting more attention
The campaign for 'Footprint Justice' is gathering momentum with a call for UN member states to investigate the legal implications of enshrining a 'Fair...
Report: The intersection of politics and spirituality in addressing the climate crisis
The following interview with STWR’s founder, Mohammed Sofiane Mesbahi, examines both the contemporary political and profounder spiritual implications of...
Printer-friendly version