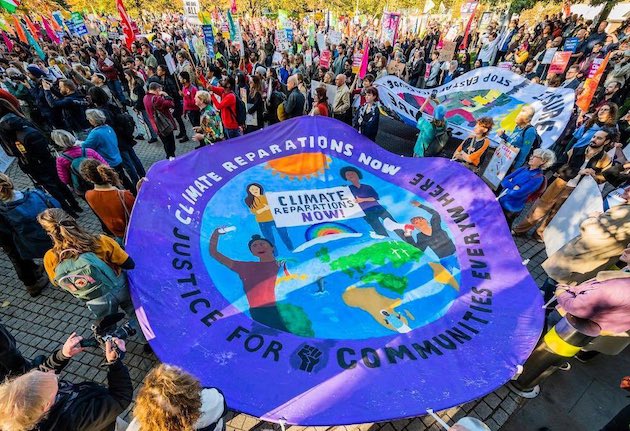 As the 27th United Nations Conference on Climate Change (COP27) closes, the collective power of civil society groups and grassroots climate activists saw a historic outcome with the establishment of a loss and damage fund.

But this victory cannot be attributed to the developed nations who have been blocking and delaying this outcome for years. It is the consistent and powerful mobilization of the frontline climate defenders and those inside the venue who refused their voices to be drowned when negotiations came to a standstill. It is time for developed countries to finally step up and deliver on this fund because an empty fund is an empty promise made at the expense of millions all over the world suffering from the consequences of climate change they cannot adapt to any longer.

The world is experiencing an unprecedented climate crisis and the United Nations Conferences on Climate Change demonstrate they continue to be held hostage by the rich countries backed by big polluters and failing to deliver real climate action for the people. Rich nations exhausted the capacity of the climate talks this year as they pretended to be leaders on mitigation when they have not met their emission reduction commitments. The developed countries continued their hypocrisy on limiting the global temperature rise to 1.5 degrees Celsius while locking the world into a fossil fuel dependent future by closing several fossil fuel energy deals on the sidelines as the climate negotiations went on.

Without real solutions, real finance, real actions on reducing global emissions, and real protection of human rights there can be no climate justice.

Representatives of the Global Campaign to Demand Climate Justice share their reactions on this landmark moment in the climate negotiations as well as the key demands the COP27 failed to deliver on.

“We welcome an initial partial win on Loss & Damage Fund — it is there but buried with other ‘financial arrangements.’ And this win is overshadowed by lack of progress on fossil fuel phase out and the continued inclusion of false solutions, which means more loss & damage! Lack of progress on Fossil Fuel phase out shows the hypocrisy of governments of rich countries in their blah blah blah about keeping global temperature rise to below 1.5 degrees, and the corporate capture of the COP by the fossil fuel industries. We need to escalate even more our struggles — in our countries and international arenas! Onwards!”

“Since EU and Alok S are disappointed that fossil fuel phase out is not in the text, we would like them to take leadership and revise their NDCs and put into plans their fossil fuel phaseout urgently and stop expansion of fossil fuels including oil and gas! Not enough to play to the gallery but act if they really want to save the planet and not hide behind 2050 net zero targets which will bust the remaining carbon budget for a 1.5 degree C. They have the historical responsibility to get to real zero and in fact negative emissions and not net zero by 2050!”

“It is a relief that the Loss and Damage fund has finally been established, after decades of struggle. But, right now, it is an empty fund, and we have a huge challenge ahead to ensure that developed countries contribute to it, in line with justice and equity. We must not see a repeat of the abysmal performance of rich countries failing to provide the already inadequate $100 billion a year promised over a decade ago.”

“The powerful advocacy of climate-vulnerable countries and the global climate justice movement forced a ground shift at this COP on paying up for loss and damage. The failure to commit to a full fossil fuel phaseout will mean even more loss and damage, in a vicious cycle of escalating harm and inadequate reparation. Any further expansion of fossil fuels betrays world leaders’ promises to limit warming to 1.5 degrees Celsius and puts our planet in further peril.”

Battle lines were drawn at COP27 between rich countries and poor countries. The US, EU, UK and others came to the Summit with empty words, hollow promises & a refusal to take responsibility for having set the planet on fire and destroying millions of lives & livelihoods.

But we leave the Summit with a glimmer of hope that the establishment of a Loss and Damage Fund will provide much needed support to those on the frontlines of the climate catastrophe. It’s a small step, a critical one, but an empty fund means nothing. Rich countries who continue to pollute must now provide real finance to the fund.

This historic victory was only made possible because of people power. The unprecedented pressure by climate justice groups and the refusal of developing countries to be bullied or divided, dragged rich countries kicking and screaming across the line.

But we leave this Summit bitter at the refusal of the rich to cut their emissions, and shift away from their addiction to fossil fuels. This continues to be a life and death fight for the future of humanity. But the growing power of climate justice movements is sending a warning to rich countries that we are not, and never will be defeated.

“The fact that the outcome only talks about ‘phasedown of unabated coal power’ is a disaster for Africa and for the climate. Oil and gas must also be phased out, swiftly and fairly. One small word, ‘unabated’, creates a huge loophole, opening the door to new fossil-based hydrogen and carbon capture and storage projects, which will allow emissions to continue. We don’t need more gas extraction in Africa, devastating our communities for the benefit of rich countries and corporations. What we needed from COP27 was agreement to a rapid, equitable phase out of all fossil fuels.”

“Climate talks bankrolled by Big Polluters, and governments like the US doing their bidding. While the perseverance of movements and Global South governments finally secured a way forward for Loss and Damage finance, amidst a climate emergency this alone is simply not enough. COP27 needed to deliver a package of real solutions, real finance, and Real Zero pathways that equitably phase out fossil fuels. As long as Big Polluters are allowed to write the rules, the name of the game will always be ‘climate inaction.’ It’s time to reset the system, kick Big Polluters out, and make them pay for the damage they cause.”

“This COP brought an opaque, undemocratic process that once again focused on the interests of financial institutions and the fossil fuel industry than in the communities who have real solutions to the climate crisis. The conditions of Egypt and restrictions on democracy made this COP in particular a COP of blatant hypocrisy. We stood by Alaa Abd El-Fattah fight for his freedom, and the freedom of all political prisoners, while our own actions as activists were restricted. While a historic loss and damage fund in this final decision is a result of decades of movements advocating for the lives of our communities, more must be done to make concrete the promise of this fund and ensure no finance mechanisms exploit people and reproduce colonial relations between vulnerable populations and financial institutions. This moment is the result of movements. And further real progress to confront the crisis continues outside of the UNFCCC in the streets and in communities where people are organizing to stop new fossil fuel projects and build real community-led and people-centered solutions,”.

“The decision on carbon markets is deeply worrying. Whilst COP27 has temporarily delayed moves to put geoengineering, dangerous and untested technologies, and nature-based solutions into carbon offset markets, we know these threats will rear their heads again, giving cover for continued emissions by polluters, grabbing of land, forests and water from vulnerable communities, and violations of peoples’ rights.”

“The outcomes of the COP27 perilously indicate the immense corporate power and their scandalous lobbying for false climate solutions. A multilateral forum like the UNFCCC is fast losing its credibility, not being able to facilitate bridging the existing gap between global climate policy and climate justice. But, Sharm El Sheikh also demonstrated that it is the indomitable power and strength of the unity of  frontline communities, indigenous peoples, women, peasants, workers and the youth that can force our governments and the corporates to junk false solutions  and change the system to move forward towards real climate solutions and real zero.”

“In a critical year, this COP again failed to recognise that a rapid and equitable phase-out of all fossil fuels — oil, gas, and coal — is our only chance to achieve climate targets and avoid the worst impacts of climate change. Despite some important progress toward establishing a loss and damage fund, the final outcome regurgitated unambitious language on fossil fuels that will lead to catastrophic consequences for people and planet. Even with this disappointing outcome, we’re seeing meaningful commitments from the Beyond Oil and Gas Alliance and countries and institutions ending overseas public finance for fossil fuels. Outside the COP, we will continue the fight for an equitable end to fossil fuels and a just transition to clean energy.”

“For there to be any semblance of justice in the COP, big polluters must first be kicked out of the process! The brazen hypocrisy of the COP and what has now become a game of ‘hide and seek’ as far as the phasing out of fossil fuel goes, coupled with the embarrassing deletion of human rights, labour rights and the rights of Indigenous peoples in Article 6.4 and the unpopular expungement of reference to mitigation of global emissions by the supervisory body is a dangerous game taken too far. It is crystal clear that rich countries and big polluting corporations have no care or regard for the future, dignity of peoples or true justice; for there can be no climate justice without human rights!”

“Like an avalanche, the climate crisis is accelerating and overwhelming people and nature. World leaders talked a lot, but it was the rich nations who acted half-heartedly and unfairly. The EU and US are claiming to be 1.5°c champions, yet still don’t accept equity and their historical responsibility. That is an astonishing and unacceptable betrayal of people and nature. There is a glimpse of hope, the pressure of the people and poor nations made it possible to establish the urgently needed fund for the poorest to deal with climate losses and damages.

“The UN climate conference has put the spotlight on the human rights situation in Egypt — where freedom of expression and freedom of the press are not accepted — and particularly the case of political prisoner Alaa Abd El Fattah. Alaa may not yet be free, but the global community will not stop calling for his release when they leave Egypt. There is no climate justice without human rights.”

Global Campaign to Demand Climate Justice is a network of over 200 networks and organizations working globally, regionally, and locally on climate justice.

News: COP27 closes with deal on loss and damage: ‘A step towards justice’, says UN chief
After days of intense negotiations in Sharm el-Sheikh, countries at the latest UN Climate Change Conference, COP27, reached agreement on an outcome that...
Report: The imperative of cooperation: Steps towards an equitable response to the climate crisis
A new report provides a global equity analysis of how climate pledges stack up against the Paris Agreement goal of limiting warming to 1.5°C.
News: Climate crisis needs cooperation between all nations - time is running out to save Earth
Media organisations worldwide have published a common view about the need for nations to cooperate, accept their moral responsibilities and fairly share...
News: Climate Clock erected at COP27 says richest nations owe $31.8 trillion... and counting
As world leaders gather at the United Nations Climate Change Conference, the Climate Clock team is displaying reminders of a looming deadline and just how...
Report: The intersection of politics and spirituality in addressing the climate crisis
The following interview with STWR’s founder, Mohammed Sofiane Mesbahi, examines both the contemporary political and profounder spiritual implications of...
Printer-friendly version