The world food crisis is about to get worse 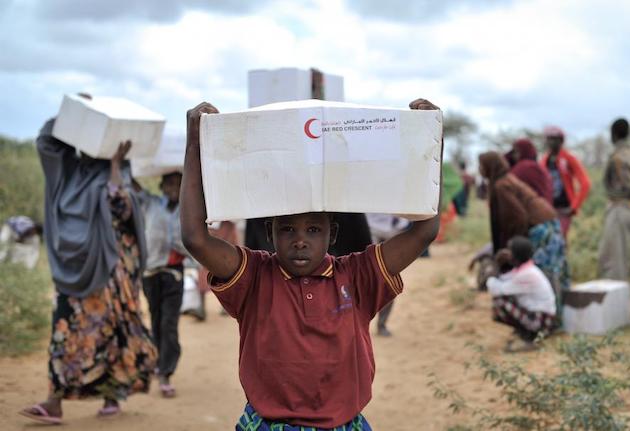 Millions are facing starvation as war combines with financial and climate-driven shocks. Now the U.N. goal to end hunger by the end of the decade looks further than ever.

The war is exacerbating a crisis already fueled by climate change, soaring costs of living and a fertilizer price hike that is creating the most acute global food crisis in decades. A U.N.-brokered agreement to reopen the Black Sea for food ships may not be enough to bring relief to the millions of people struggling to eat across Africa, Asia and the Middle East.

“I’ve been working in this sector now for more than 15 years and this for me is the worst crisis we've seen," said Carin Smaller, executive director of the Shamba Centre, a think tank working to end global hunger.

Humanitarian agencies are scrambling to prepare themselves for even more critical levels of hunger, as they face a €14 billion annual gap in food security spending, according to a 2020 report by Ceres 2030, also a think tank. Moscow's war in Europe's breadbasket has severely rocked global food markets, forcing humanitarian agencies to slash food rations in countries like Yemen. Thirty-six countries rely on Ukraine and Russia for more than half of their wheat imports.

A special U.N. crisis task force is monitoring more than 60 countries that are struggling to pay for food imports. High energy prices and volatility in the food markets have put extra pressure on cash-strapped developing countries.

As more people grow hungry globally, the U.N. goal to end hunger by the end of the decade looks further than ever.

Drought is gripping the Horn of Africa, leaving some 26 million people facing food shortages in Kenya, Ethiopia and Somalia over the next six months. More than 7 million livestock animals have already been wiped out. Across East Africa as a whole, some 50 million people are facing acute food insecurity.

Jan Egeland, secretary general of the Norwegian Refugee Council, tweeted: "An entirely preventable famine threatens the Horn of Africa region." This is the "mega-crisis no one is talking about," he said.

In Lebanon, also a large importer of Russian and Ukrainian wheat, real food inflation has been running at 122 percent. Domestic food price inflation is high in almost all low- and middle-income countries, according to the World Bank.

That means it's difficult for people to afford food even in places where there isn't a shortage. People are paying more for basic necessities everywhere from Peru to Burundi. According to the World Food Programme, a record high of 49 million people in 46 countries could fall into famine or “famine-like conditions” amid the food crisis. The worst affected countries are Ethiopia, Nigeria, South Sudan, Afghanistan, Somalia and Yemen, where there are 750,000 people facing starvation and death, of which 400,000 alone are in Ethiopia’s Tigray region, where there is an ongoing civil war.

Low foreign exchange reserves made it difficult for Sri Lanka to import food. The ousted government sought to improve its balance of payments crisis by banning the import of fertilizer, which — coupled with an outright ban on using them — led to the destruction of half the country's rice crop.

"Domestic food production has dropped sharply over the past year, fuel shortages have made production, processing, transportation and retailing very difficult, and food and fuel imports are prohibitively expensive," said Shalmali Guttal, executive director of Focus on the Global South, a think tank.

An agreement between Russia, Ukraine, Turkey and the U.N. to restart food exports from Ukraine's Black Sea ports has helped ease markets somewhat. Wheat prices dropped by 14.5 percent between June and July, encouraged by the prospect of some 20 million tons of grain locked in Ukrainian silos being exported.

But the agreement has got off to a slow and shaky start since being signed on July 22. Russia immediately hit the port of Odesa with missiles, and Ukraine, though optimistic of bringing in much needed financial relief for its farmers, says there is only a "small chance" of it succeeding.

The dozen or so ships that have braved the maritime corridor so far have largely been those that have been stuck in Ukraine since the outbreak of war and huge challenges remain to get vessels to arrive in numbers, including U.N.-chartered ships carrying food aid.

Even if Ukraine and Russia export at full capacity, experts are wary that the deal could be voided easily. “Is it enough to restore the pre-war status quo? No," wrote two agricultural economists Joseph Glauber and David Laborde in July.  “A single errant rocket could cause insurers to balk at providing insurance," they wrote.

The international development world is also holding its breath.

“It’s not yet clear whether Ukraine can really manage to export everything that needs urgently to be exported," said Dominik Ziller, the vice president of the International Fund for Agricultural Development (IFAD), a U.N. agency.

“We still fear that these staple food shortages could trigger turmoil in the commodity markets, and lead to price hikes again that will hit again hardest the poorest in the rural areas," he said.

Many parts of the world are experiencing extreme weather phenomena partly due to climate change. Extreme heat in South Asia and the U.S., drought in large parts of Europe and East Africa and China, and floods in Korea have meant large amounts of crops dying, making the food that's available more expensive.

"I would observe that on the whole, global stocks in grains and oilseeds are tight, and that’s part of the food inflation story,” said Robynne Anderson, who represents the agriculture industry at the U.N.'s Committee on World Food Security. Wheat production is predicted to decline in 2022, for the first time in four years.

"We need agriculture firing on all cylinders on all continents all the time, because climate change is always going to mean somebody is struggling," she argued.

A fertilizer price spike has also made it more expensive to grow food. One U.N. official warned that the crisis is "enormous," and threatens to prolong the hunger crisis if farmers across the globe spread less of the yield-boosting chemicals to save their bottom lines. The price of fertilizer was already high before Russia invaded Ukraine, but due to the industry's dependence on natural gas — which has also skyrocketed since the war — it's gone further up.

A flurry of international political initiatives have sprung up to tackle the crisis, including from France and Germany, but experts believe they won't be effective without a big injection of cash.

“They are all really good initiatives. It’s not clear if there’s any additional money," said Smaller, of the Shamba Centre.

The World Food Programme has banked $8 billion of donations this year but needs a total of $22 billion.

If the money comes in, emergency aid may help stave off the worst ravages of the hunger crisis this year, but experts say the world needs systemic change.

"When there’s a crisis, there’s always a big readiness to do emergency relief, which will not create sustainable development but prevent people from dying," said IFAD's Ziller. "When it’s about creating resilience, about financing long term development, it’s more difficult to mobilize funds."

News: Record profits for grain firms amid food crisis prompt calls for windfall tax
Companies at the centre of the global grain trade have enjoyed a record bonanza amid soring food prices around the world, raising concerns of profiteering...
News: U.N. humanitarian agencies face record funding gap this year
U.N. humanitarian projects face a record funding gap this year, with only a third of the required $48.7 billion secured so far as global needs outpace...
Blog: It’s time we all come together to address the global food crisis
Millions of lives are at stake and the world’s most vulnerable do not have the luxury of time, write Abdulla Shahid and Gabriel Ferrero de Loma-Osorio.
News: Horn of Africa faces most ‘catastrophic’ food insecurity in decades, warns WHO
More than 37 million people are facing acute hunger, with approximately seven million children under the age of five acutely malnourished in the region.
Blog: How the Treasury Department could prevent mass starvation with no cost to the taxpayers
As hunger threatens millions, the Biden administration should give its OK for the IMF to distribute financial backing to the world’s poorest countries. By...
Printer-friendly version