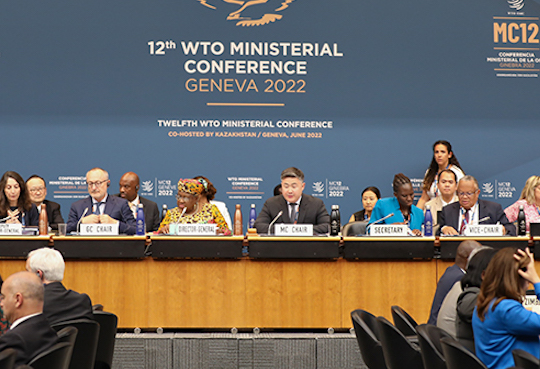 The World Trade Organization's 12th Ministerial Conference ended with an agreement on patent rights that campaigners said would do virtually nothing to address vast global inequities in coronavirus vaccine and treatment access, a failure they attributed to relentless obstruction by rich countries and the pharmaceutical industry. Reported by Common Dreams.

Reached after marathon negotiations, the narrow deal reached on 15th July clarifies governments' ability to use compulsory licensing to ramp up vaccine production without the consent of patent-holding pharmaceutical companies. The agreement also temporarily eases restrictions on the export of vaccines produced under compulsory licenses.

The final text, which is set to remain in effect for a period of five years, drew furious responses from public health advocates who slammed the deal as a product of a fundamentally unequal process that saw rich nations—acting on behalf of the pharmaceutical industry—dictate the outcome with minimal regard for developing countries. One conference attendee, Anna Marriott of Oxfam International, said she heard that some national delegations did not even get a chance to see the text before it was adopted by the WTO.

"The conduct of rich countries at the WTO has been utterly shameful," said Max Lawson, co-chair of the People's Vaccine Alliance. "The E.U. has blocked anything that resembles a meaningful intellectual property waiver. The U.K. and Switzerland have used negotiations to twist the knife and make any text even worse. And the U.S. has sat silently in negotiations with red lines designed to limit the impact of any agreement."

"This so-called compromise largely reiterates developing countries' existing rights to override patents in certain circumstances," Lawson added. "And it tries to restrict even that limited right to countries which do not already have capacity to produce Covid-19 vaccines. Put simply, it is a technocratic fudge aimed at saving reputations, not lives."

The WTO's limited agreement is a far cry from the original patent waiver that India and South Africa introduced 20 months ago, in the early stages of a pandemic that has taken more than 15 million lives worldwide. The coronavirus has killed an estimated 30,000 people each day on average since India and South Africa unveiled their proposal in October 2020.

The two nations' waiver plan was backed by more than 100 WTO member countries, but rich governments derailed every attempted advancement of the text, offering alternatives that would leave in place—and even bolster—intellectual property restrictions that have hindered vaccine production throughout the pandemic. The pharmaceutical industry, which has raked in huge profits throughout the deadly pandemic, also lobbied aggressivelyagainst India and South Africa's proposed waiver.

To date, just 18% of people in low-income countries have received at least one coronavirus vaccine dose.

"Once again, the shameful, undemocratic WTO process allowed rich countries representing corporate interests to strongarm a sham agreement that bears no resemblance to the original waiver proposal and will do nothing to help save lives for this or future pandemics," said Melinda St. Louis, Global Trade Watch director at Public Citizen. "The worldwide movement that supported countries in the Global South that proposed a comprehensive TRIPS waiver, and fought valiantly for nearly two years, will not throw in the towel just because WTO members decided to today."

Dr. Christos Christou, international president of Doctors Without Borders, added that while "a few changes were made" to an earlier draft text that advocates panned, the final agreement "fails overall to offer an effective and meaningful solution to help increase people's access to needed medical tools during the pandemic as it does not adequately waive intellectual property on all essential Covid-19 medical tools, and it does not apply to all countries."

"The measures outlined in the decision," Christou added, "will not address pharmaceutical monopolies or ensure affordable access to lifesaving medical tools and will set a negative precedent for future global health crises and pandemics."

Report: Pandemic of greed: A wake-up call for vaccine equity at a grim milestone
The COVID-19 death toll has been four times higher in lower-income countries than in rich ones, according to a new report published by Oxfam on behalf of...
Blog: Global youth demand EU, UK 'unconditionally' back vaccine patent waiver
Dozens of youth-led advocacy groups from around the world have published an open letter urging the European Union, the United Kingdom, Norway, and...
Report: Pharmaceutical companies’ failure on equal vaccine access contributed to human rights catastrophe in 2021
Despite urgent calls to ensure the equal distribution of Covid-19 vaccines, pharmaceutical companies tragically failed to rise to the challenge of a once-...
Blog: A new international health order is within reach
To end the pandemic, we need a transformative shift away from the short-termist and profit-captive model of global health governance. And Cuba is showing...
News: Covid vaccines create 9 new billionaires with combined wealth greater than cost of vaccinating world’s poorest countries
At least nine people have become new billionaires since the beginning of the COVID pandemic, thanks to the excessive profits pharmaceutical corporations...
Printer-friendly version