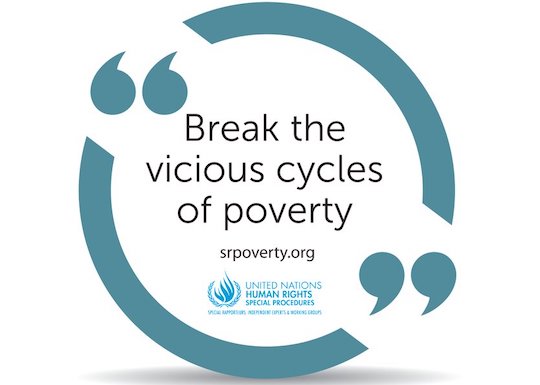 “Poverty and privilege continue to reproduce themselves in vicious cycles, driven by unacceptable levels of inequality. But with political will, we can break these cycles, and move from fate to opportunity.” This is the main message of UN poverty expert Olivier De Schutter in a new report presented to the UN General Assembly today.

“Many countries pride themselves on ensuring high levels of social mobility. The truth however is that the persistence of privilege at the top, and deprivation at the bottom, are all too commonplace. In OECD countries, it takes four to five generations for children in low-income households to reach the mean income in their country. In emerging countries such as Brazil, Colombia or South Africa the same would take up to nine or even more generations,” said the UN Special Rapporteur on extreme poverty and human rights.

Since 1980, in most country income of the wealthy has grown faster than that of the poor, exacerbating wealth disparities. The top 10 percent of people living in OECD countries control 52 percent of total net wealth, while the bottom 60 percent own just over 12 percent, condemning the poor to a lifetime of poverty, he said.

“Children born in poor families have less access to healthcare, decent housing, quality education and employment than those in better-off households“, De Schutter said. “This dramatically reduces their chances of breaking free from the poverty trap. The result is appalling: children born in a family experiencing poverty are more than three times as likely to be poor at age 30 than those who were never poor.”

“Child poverty is not only morally unconscionable and a human rights violation – it is expensive too. In the United States, child poverty costs over $1 trillion annually, or 5.4% of its GDP, but for each $1 invested on reducing it, $7 would be saved,” said the expert.

It’s time to dispel the myth that inequality is an incentive that encourages people to work harder, he said: “The facts point to the exact opposite. Inequality lowers social mobility and entrenches advantage and disadvantage over decades. When we fetishize merit, we stigmatize those in poverty or with low incomes, and blame them for their own condition,” De Schutter said. “In fact, poverty is a failure not of the individual, but of society.

“My new report shows how these cycles can be ended. Investing in early childhood, promoting inclusive education, giving young adults a basic income financed through inheritance taxes, and combating anti-poor discrimination are the key ingredients needed to break the cycles of advantage and disadvantage. Governments must act now before another generation is condemned to the same fate as their parents.”

A shorter version of the official report is also available.

Mr. Olivier De Schutter was appointed as the UN Special Rapporteur on extreme poverty and human rights by the UN Human Rights Council on 1 May 2020.

Report: Global efforts to minimize poverty amid COVID-19 are 'full of holes': UN expert
Current social protection programs are not enough to stop millions of people falling into poverty during the COVID-19 pandemic, according to the UN...
Blog: UN expert calls for an ambitious social Europe, says COVID must spark rethink
Over 90 million people across the EU live at risk of poverty and social exclusion. Yet the Union's current action plan doesn't come near to the pledge of...
Report: UN envoy condemns failed global poverty eradication efforts
Global poverty is rising, directly contradicting the mainstream wisdom that it is being eradicated, according to a new report to the UN. States are...
Blog: Why we need a new economic model centred on human rights
'Amid a pandemic that has taken over a million lives, we urge the same level of imagination as the drafters of the Universal Declaration over seventy...
Blog: Civil society call for a global fund for social protection
Over 200 civil society organizations and trade unions unite to call for a Global Fund for Social Protection to protect the most vulnerable during COVID-19...
Blog: Covid-19 has exposed the catastrophic impact of privatising vital services
Global markets have failed to provide people with basic needs like housing and water, say present and former UN special rapporteurs.
Printer-friendly version