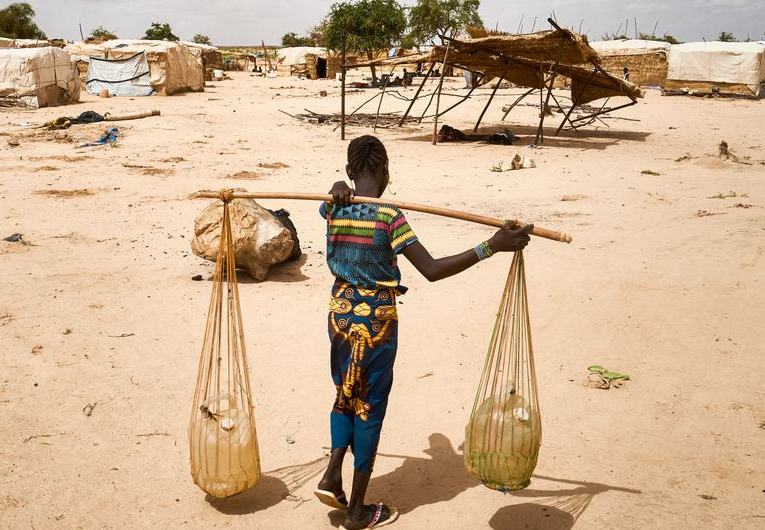 According to the Hunger Hotspots Report from the World Food Programme (WFP) and Food and Agriculture Organization (FAO), Ethiopia, Nigeria, South Sudan and Yemen remain the countries of highest concern.

According to the most recent assessments, all four countries had areas where people were experiencing, or projected to experience, starvation and death (IPC Phase 5), requiring the most urgent attention.

The report shows that the links between hunger and conflict are complex and far-reaching. In fact, many of the people that WFP supports are fleeing conflict and have been forced to abandon their land, homes, and jobs.

These trends are likely to continue in Myanmar, Central African Republic, the Democratic Republic of the Congo, Central Sahel, Sudan, South Sudan, Somalia, the northern parts of Ethiopia, Nigeria and Mozambique.

Another worrying trend is the impact of climate extremes. For WFP and FAO, climate change “is no longer a glimpse into the future, but the daily reality for communities around the world.”

This can already be seen in Haiti, Eastern Africa, Madagascar, Mozambique, and recently in Afghanistan’s western region of Badghis.

At the same time, economic challenges post-pandemic, persist, and will continue to drive food prices higher.

Despite a brief decrease in mid-2021, world food prices have been rising since May 2020, with the areas of most concern, being the Near East, North Africa and Central and Eastern Asia.

Humanitarian access constraints and complex security environments, continue to pose a challenge to operations in Ethiopia, Mali, northern Nigeria, Niger and Syria, and are likely to linger in the Central African Republic and Colombia.

In South Sudan, one of the four countries of highest concern, conflict and constrained humanitarian access, the effects of the COVID-19 pandemic, economic challenges, and elevated food prices, are worsening the situation.

Communities have also had to grapple with severe flooding that has caused widespread displacement, damage to agricultural production, the destruction of livelihoods and compounded existing issues in many regions.

The situation is of highest concern in conflict-affected Borno State, where around 13,500 people are projected to slide into catastrophic acute food insecurity if humanitarian and livelihood-building interventions are not sustained.

There has been no update for Ethiopia since the July-September 2021 projection, when experts concluded that 401,000 people in the Tigray region would likely be facing famine-like conditions. For the agencies, this lack of data is of serious concern.

Acute food insecurity levels are likely to have increased and could further rise beyond the Emergency and Catastrophic levels already identified in the last report.

Hunger is also mounting in Yemen due to the toxic mix of conflict and economic decline. As a result, half of all Yemeni families are now consuming less food than what is required.

The cost of a minimum food basket in Government-controlled governorates has more than doubled. This decline is driven by the nearly depleted foreign currency reserves, which make it harder to import food.

Increased humanitarian assistance between April and July of 2021 helped stabilize food security levels, but key indicators show a deterioration in the second half of the year.

The report also highlights the situation in Afghanistan, where projections show a record high of people facing critical levels of food insecurity.

There is also a serious risk that part of the population will face starvation and death (IPC Phase 5) if the crisis is not contained.

There are 22.8 million Afghans facing acute food insecurity. By March, 8.7 million of those are expected to slide into critical levels of food insecurity (IPC Phase 4), more than double the number from the same time last year and a record high for the country.

The Horn of Africa, a region already prone to food insecurity, is now facing a third season ofdrought, driven by La Niña.

In Ethiopia, Kenya and Somalia, the worst affected countries, projections indicate that food insecurity will rise beyond the region’s already high levels by mid of the year.

In the Sahel, a weak rainy season has severely affected crop and pasture development.

Over 10.5 million people are projected to be at a crisis level or worse (CH Phase 3 and above), a 20 percent increase compared to last year.

News: Acute hunger set to soar in over 20 countries, warn FAO and WFP
Acute hunger is set to soar in over 20 countries in the coming months without urgent and scaled-up assistance, warn the UN's Food and Agriculture...
News: 'Toxic cocktail' of factors leads to grim hunger numbers, report finds
A “toxic cocktail” comprising the COVID-19 pandemic, the climate crisis, and “increasingly severe and protracted” violent conflicts is contributing to the...
Report: More than half a billion people pushed or pushed further into extreme poverty due to health care costs
New evidence compiled by the World Health Organization and the World Bank shows that the COVID-19 pandemic is likely to halt two decades of global...
Report: Most infants in 91 countries are malnourished, warns Unicef
Only a third of children under two in many developing countries are fed what they need for healthy growth and no progress has been made on improving their...
News: 4.1 billion lack social safety net, warns UN labour agency
More than four billion people live without any welfare protection today to cushion them from crisis, the UN International Labour Organization (ILO) report...
Printer-friendly version