In the midst of the pandemic, why is the IMF still pushing austerity on the Global South? 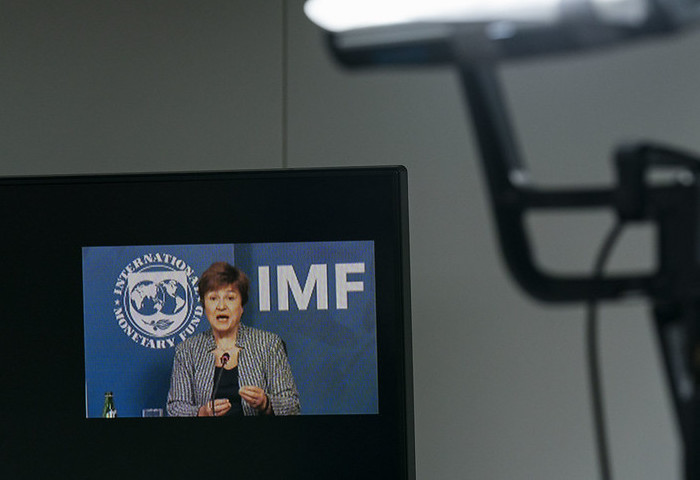 Despite its own warnings, the International Monetary Fund is risking another ‘lost decade’ for development, reports Soren Ambrose for openDemocracy.

In the wake of the 2007-2008 financial crisis, a report by the International Monetary Fund’s independent evaluation office into the institution’s handling of the downturn praised its role in supporting global stimulus plans to boost economic activity, but criticised it for endorsing a premature return to austerity measures. Surely the IMF won’t make the same mistake twice?

At the start of the COVID-19 crisis, the IMF’s economic forecasts and warnings that the pandemic could trigger a global recession on a scale not seen since the Great Depression, prompted governments to act.

Debt relief was promised for the poorest countries and the IMF began making rapid emergency loans to governments desperate for liquidity as the virus moved from country to country. Grants would have been preferable, but the fact that they were able to move large amounts of cash quickly was widely welcomed.

But it didn’t take long for the IMF to return to its usual profile as a relentless purveyor of austerity economics for developing countries. In normal times, this identity makes its loan programs an obstacle to development and human rights; in COVID-19 times, it threatens to plunge countries into years of suffering and depression – a new ‘lost decade’ for development, as many, including the IMF itself, have warned.

ActionAid’s new policy briefing, The Pandemic and the Public Sector, looks at how the COVID-19 health and economic crises have affected IMF policy advice, with a particular focus on constraints on public sector wage bills. It finds that the emergency loans the IMF distributed between April and July contain commitments to new or renewed austerity programmes as soon as the immediate health crisis has peaked, with little provision for any recovery period.

We found that the documents attached to those emergency loans contain a poison pill that many might have missed when the primary concern was to get cash flowing. In the majority of the loans, the IMF has extracted pledges from most recipient governments to return to or adopt austerity as soon as the pandemic recedes (in Sub Saharan Africa, 25 of 30 countries promise a full reset, and four more promise a partial one).

Virtually every country receiving an IMF emergency loan has a section like Ghana’s, stating:

Fiscal consolidation in the IMF’s lexicon means austerity programs. Despite the fact that these moves are not framed as conditions, the IMF’s obvious push for the use of the word ‘commitment’ in most countries’ loan documents certainly suggests an obligation on the governments’ side. These commitments will reduce or freeze public sector wages and seriously constrain public spending during what would otherwise be the countries’ economic recovery period.

This failure to support a genuine recovery after relaxing demands for austerity during the start of the crisis sits uncomfortably with statements made by the IMF’s managing director Kristalina Georgieva in April about the crisis being an opportunity to “craft a different and better future together”.

There are further glimmers of alternative thinking from policy staff and the IMF leadership where this return to austerity is challenged. A frequently-asked questions document on the IMF’s COVID-19 response argues that “countries should also be ready for fiscal stimulus to lift demand and help the economy to come back.

And last week, Georgieva warned in a blog post about the damaging effects of austerity: “Just as they [indebted countries] are starting to recover from the pandemic, many of these countries could suffer a second wave of economic distress, triggered by defaults, capital flight, and fiscal austerity. Preventing such a crisis can make the difference between a lost decade and a rapid recovery that puts countries on a sustainable growth trajectory.

It’s striking that Georgieva references a “lost decade”, which refers to the 1980s in developing countries (and for many in Africa also the 1990s) because of the economic standstill, including massive erosion in public services, caused by IMF structural adjustment, or austerity programs that halted economic development in the name of stabilisation.

But the emergency loan documents as well as recent programme documents reveal that the IMF is only comfortable with responding to the immediate health crisis, not the devastating post-pandemic economic crisis that COVID-19 is giving rise to. For all of Georgieva’s talk of crafting “a different and better future together”, the IMF has exposed itself in its actual emergency response as having just one tool: austerity.

Confronted with a once-in-a-century economic crisis requiring major systemic overhauls, the world’s premier macroeconomic institution scratches its head and seems to suggest that it can offer no alternative to the austere status quo that it has enforced over the past 40 years.

Perhaps it is time to find a way for global agencies other than the IMF, such as UN Conference on Trade and Development or the UN Development Program, whose mandate goes beyond maintaining a particular definition of economic rigor to valuing development and global welfare, to take a more active, even a leading, role in devising financial recovery plans for developing countries.

Report: The Bretton Woods Twins in the era of COVID-19: Time for an exit strategy for the Global South?
An exit strategy from the World Bank and IMF could lead to serious efforts to create a new system of international governance based on the principles of...
News: The IMF must immediately stop promoting austerity around the world
More than five hundred of the world’s leading charities, social groups and academics have sent a letter to the International Monetary Fund warning that...
Report: Global efforts to minimize poverty amid COVID-19 are 'full of holes': UN expert
Current social protection programs are not enough to stop millions of people falling into poverty during the COVID-19 pandemic, according to the UN...
Blog: Gleneagles 15 years on: The last debt cancellation
Last week marked 15 years since the G8 Summit in Gleneagles, Scotland, when leaders of the world’s richest countries agreed debt cancellation for many of ...
Article: We can’t trust the IMF and World Bank to lead the COVID-19 recovery
Despite decades of protests against them, the IMF and World Bank continue to force the same discredited policies on poor governments and their people,...
Printer-friendly version