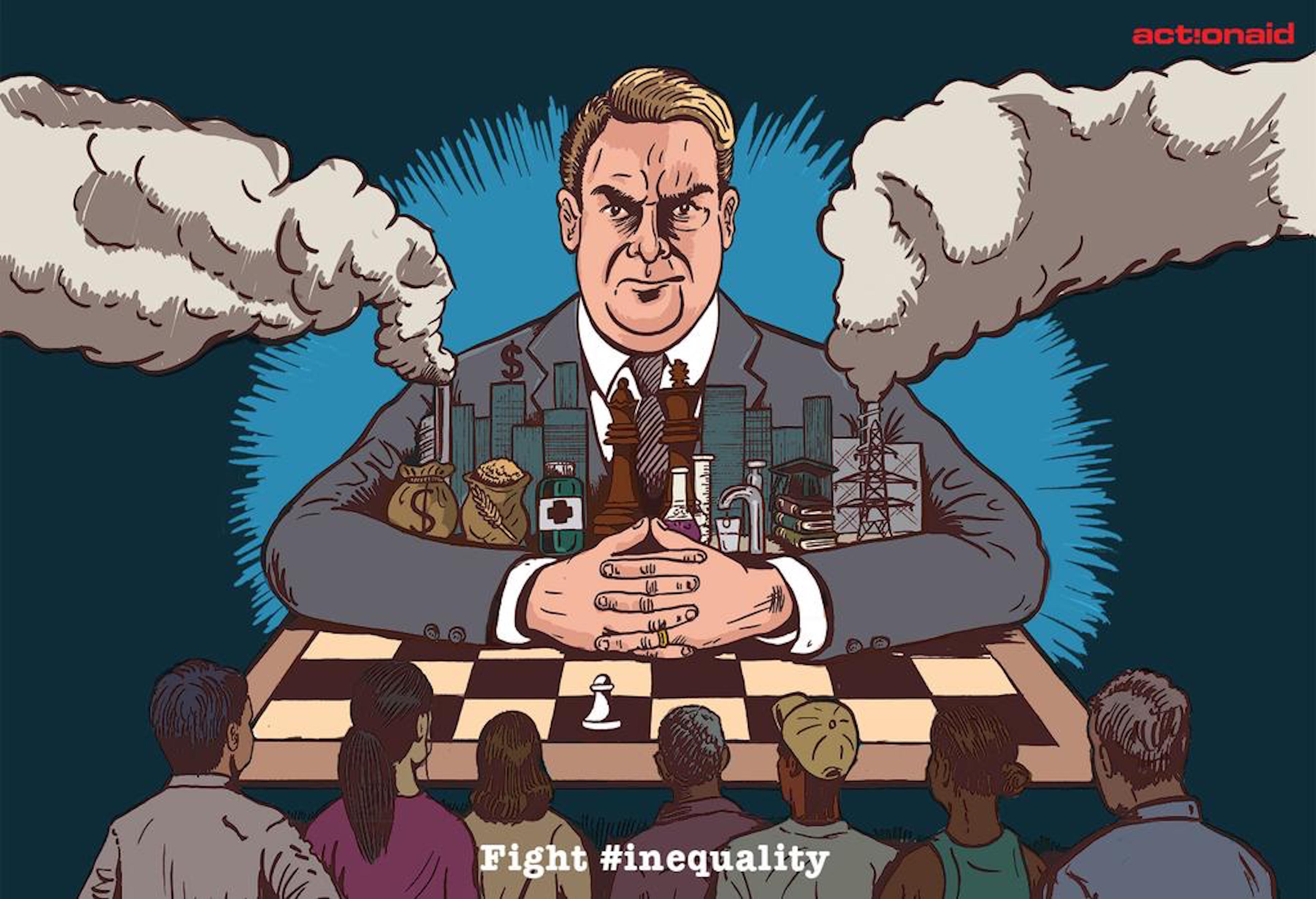 As the world’s media showcase Donald Trump and the World Economic Forum, ActionAid urge us to stay focused on the presence of social movements that pose the real solution to rising inequality. Only people’s power, united across borders, can reverse the hoarding of power and wealth by a tiny elite, re-democratizing our politics, our societies, and our economies.

The following extract is taken from ActionAid's latest brief [pdf] that summarises the publications from its Inequality Series.

A year of surprising rightward political shifts in powerful countries has left many people around the world concerned about progress in the struggles for women’s equality, protection of human rights, and curtailing discrimination against minorities and migrants. Many fear also that with the election in the US of a billionaire businessman who is making other ultra-wealthy executives and investors his top advisors, the fight against economic inequality also faces substantial new obstacles. Already the failure to implement more effective regulations and redistribution measures since the onset of the global financial crisis in 2008 has meant a lot more resources for the very richest, but hardly anything for everyone else. Since the crisis, the OECD has found that levels of income inequality within and between countries are the worst in half a century.

Now, during the first month of 2017, we are witnessing two spectacles that will highlight those very inequalities.

The first is an annual celebration – the World Economic Forum (WEF) in Davos, Switzerland (17th-20th January). It gathers the mega-rich and powerful from around the world to talk about creating still more wealth. Once an unreservedly glitzy affair of triumphant hyper-capitalism, in recent years it has become more subdued, addressing, however intermittently, the deficiencies of the global economic system. The Forum has even sprouted its own think-tank, and inequality has become one of its main areas of focus. In October it made headlines by releasing a report estimating that at the current rate of progress it will take one hundred and seventy more years for women to receive pay equal to men’s.

But the more unique and momentous event will be the inauguration of Donald Trump as the President of the United States on 20th January. This spectacle is shot through with irony: many of the people who voted for Trump have suffered the most from that country’s burgeoning economic inequality. Yet Trump has built his fortune through inheritance, dubious business deals and tax avoidance, and his political success through exaggerations and lies.

Both the WEF and the Trump Administration will portray themselves as friends of those on the other side of the inequality equation. And indeed they may well take steps: persuasive studies or selfless speeches in Davos; small business loans or an “America First” approach to trade policy from Trump – seemingly intended to reduce the gap.

But the problem of inequality is systemic. It is that systems of governance, of finance, and of social order, are devised and maintained by those who already have power. Even the best-intentioned people with power are unlikely to take steps to meaningfully dismantle the system that has sustained them and their peers. We cannot afford to be blinded by the WEF’s critiques of and solutions to global inequality, or Trump’s inflated promises. Both the WEF and Trump are products of a global economic system, underpinned by patriarchy, that creates and sustains gross imbalances of power and wealth. Their concerns for the plight of those with less, sincere or not, are greatly outweighed by the impact of the very systems that amplify their claims and promises.

Page: Global poverty and inequality
World leaders may suggest that a great deal is being done already to prevent extreme deprivation, but this is far from the reality. Unless governments...
Blog: A shared society has to offer hope, opportunity and social justice not fear, inequality and austerity
A genuinely “Shared Society” requires the redistribution of power, wealth and income. But there is no value in sharing austerity, inequality and hardship...
Article: Are we stuck with inequality?
Can we get back to the equalizing, 'share-the-wealth' policies of the post-war era? Of course we can — the obstacles are political, not economic, writes...
Printer-friendly version