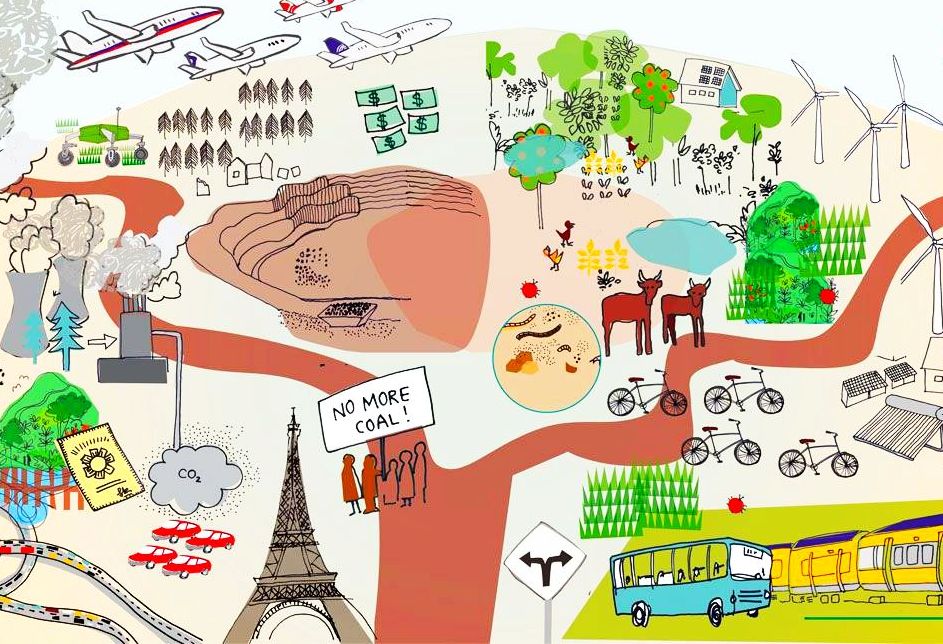 Limiting global temperatures to 1.5°C above pre-industrial levels is the only way to achieve social justice while protecting our environment from devastating climate change. And, contrary to prevailing wisdom, it's not an impossible goal, writes Barbara Unmüßig for Project Syndicate

According to the latest report by the Intergovernmental Panel on Climate Change, the world’s main scientific authority on global warming, keeping global temperatures from rising more than 1.5°C above pre-industrial levels is a feasible goal. The IPCC’s stance represents a move in the direction of the kind of “radical realism” that many civil-society actors have long advocated.

The IPCC does not bet on geo-engineering proposals – for example, deep-ocean sequestration of massive amounts of atmospheric carbon dioxide, or “dimming the sun” by spraying the atmosphere with aerosols – to combat global warming. These largely theoretical solutions could have untold consequences for people and ecosystems, worsening not only the climate crisis, but also the other social and ecological crises we face.

Instead, the IPCC focuses on how we can avoid crossing the 1.5°C threshold in the first place. We must, it asserts, decarbonize the global economy immediately to ensure that global CO2 emissions decline by about 45% by 2030 and reach net zero by 2050.

Achieving this will require not just transforming economic activity, but also confronting destructive power dynamics and social inequalities. “Radical Realism for Climate Justice,” a new anthology published by the Heinrich Böll Foundation, sets out strategies developed by international civil-society and social movements to bring about such change.

In line with the IPCC’s core message, we urgently need a politically managed decline in fossil-fuel production. This means putting a brake on oil, coal, and gas production and exploration. As the group Oil Change International notes, it does not mean abrupt or panicked action that could lead to a “sudden and dramatic shut-down of fossil fuel production, stranding assets, damaging economies, and harming workers and communities reliant on the energy sector.”

In building up the renewable-energy sector, we should avoid replicating systems that have driven inequality and entrenched damaging power dynamics in the fossil-fuel sector and other industries. This means replacing the market-based, investor-focused approach to energy production with one that treats energy as a public good, while engineering a shift toward social ownership and management of energy supplies.

Rooted in energy sovereignty and self-determination, this approach would spur faster decarbonization, including by weakening vested interests’ power to resist change. It would also facilitate the restructuring of energy systems to serve social and ecological needs.

Another system-level transformation that would facilitate major emissions reductions would be the creation of a zero-waste circular economy, whereby everything we produce and consume returns safely to nature or is recycled and reused. Consider textiles production, which in 2015 generated greenhouse-gas emissions totaling 1.2 billion tons of CO2-equivalents. These massive emissions – more than the combined total for all international flights and maritime shipping – reflect a “fast fashion” culture that produces garments as cheaply as possible, with the expectation of constant turnover in people’s wardrobes. If each garment were replaced half as often, the industry’s total greenhouse-gas emissions would plummet by 44%.

A zero-waste circular economy for textiles would include not just more use of the clothes that are produced, but also improved recycling and repurposing of materials, to avoid emissions-producing waste-disposal processes like incineration. The biggest gains would come from the introduction of less wasteful production processes.

Important steps should also be taken regarding land use (encompassing agriculture and zoning changes). As the international peasant’s movement La Via Campesina shows, the industrial food system’s emissions – including those from production, fertilizers, transport, processing, packaging, cooling, and food waste, and from deforestation associated with the expansion of industrial agriculture – account for 44-57% of the global total.

A peasant agro-ecological production system based on food sovereignty, small-scale farming, and agro-ecology could, La Via Campesina argues, halve carbon emissions from agriculture within a few decades. This approach is proven to work: small-scale farmers, peasants, fishers, indigenous communities, rural workers, women, and youth already feed 70% of the world’s population, while using only 25% of its agricultural resources.

There is also a need to restore natural ecosystems that have been destroyed. Forests and peatlands, in particular, can sequester several hundred gigatons of CO2 from the atmosphere. Their restoration would protect not just biodiversity, but also local people, including the indigenous communities whose land-tenure rights have been systematically violated. In fact, retaining and expanding the land area under management by indigenous peoples and local communities could protect over 1,000 GtCO2 worth of carbon stocks.

According to a report by the Climate, Land, Ambition, and Rights Alliance, ecosystem-based approaches in the land sector and agro-ecological changes to food production and consumption systems – including more local ownership – could deliver 13 GtCO2eq per year in avoided emissions, and almost 10 GtCO2eq annually in sequestered carbon by 2050. The result would be 448 GtCO2 in cumulative removals by 2100 – around ten times current global annual emissions.

Limiting global temperatures to 1.5°C above pre-industrial levels is our best hope of containing the effects of a climate crisis born of historical injustices and deep-rooted inequities. The only way to succeed will be to undertake a shift to a new socioeconomic system. This means abandoning the single-minded obsession with GDP growth – which has facilitated the proliferation of wasteful production and consumption patterns and fueled economic and social inequality and injustice – in favor of a public-goods approach that serves genuinely to make people’s lives better.

Demanding such a transformation is not “naive” or “politically unfeasible.” It is radically realistic. In fact, it is the only way we can achieve social justicewhile protecting our environment from devastating climate change.

Article: A sufficiency vision for an ecologically constrained world
Owing to the limits of eco-efficiency and the need to liberate environmental space for the global poor, new policy instruments should be designed to bring...
Article: Dying of consumption while guzzling snake oil: the environment crisis requires overhauling our corporate industrial civilization
We cannot count on our government officials to offer real solutions—only we can make the necessary large-scale changes in production and consumption on...
Blog: Response to the IPCC 1.5°C Special Report
The University of Manchester’s Professor Kevin Anderson responds to the latest report from the Inter-Governmental Panel on Climate Change.
Report: The intersection of politics and spirituality in addressing the climate crisis
The following interview with STWR’s founder, Mohammed Sofiane Mesbahi, examines both the contemporary political and profounder spiritual implications of...
Printer-friendly version