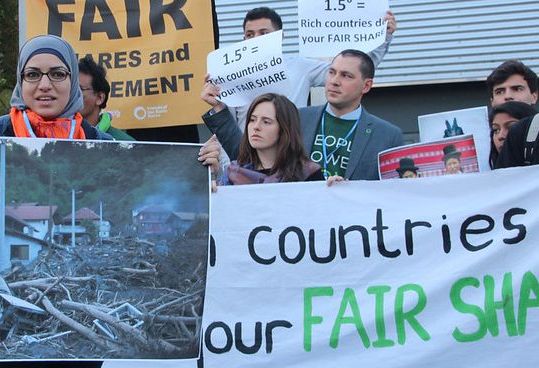 The US should be paying nearly $40bn towards the $100bn climate-finance target, new Carbon Brief analysis shows. This is $32bn more than the estimated $8bn it actually gave in 2020.

Other laggards include the UK, Canada and Australia, which all made smaller financial contributions to the internationally agreed target than their shares of historical emissions.

The analysis compares national shares of historical emissions with proportionate contributions to the $100bn climate finance target. Developed countries agreed at the COP15 climate summit in 2009 to deliver this funding by 2020.

The US, for example, is responsible for 52% of the historical emissions added to the atmosphere by Annex II countries. This is the list of “developed” or “industrialised” nations legally obliged to give climate finance under the terms of the UN climate convention.

If the US were to have paid an equivalent “fair share” of the $100bn climate finance target then, after accounting for private-finance contributions, it should have given $39.9bn.

Germany, France and Japan gave proportionally more than their contribution to historical warming. Unlike others, however, much of their finance is in the form of loans rather than grants.

This was based on the relatively wealthy “Annex II” nations having both greater capacity to cope with the challenges ahead and greater historical responsibility for causing climate change.

(Inclusion in Annex II was based on membership of the Organisation for Economic Co-operation and Development (OECD) at the time, including western European nations, the US, Canada, Australia, New Zealand and Japan. As such, it does not include large economies such as China.)

At that point they were responsible for 46% of cumulative historical carbon dioxide (CO2) emissions from fossil fuels, industrial processes, cement, land use, land use change and forestry. As of 2020, they were still responsible for 40% of the global total.

Their climate-finance obligation was given a tighter focus in 2009, when they said they would “mobilise $100bn per year by 2020” so as to “address the needs of developing countries”. But they have failed to meet this goal and are not expecting to do so until 2023.

In 2020, only $83bn of climate finance was given, including $60bn in bilateral country-to-country aid and contributions via development banks, plus $23bn from climate funds and private sources.

There are no official numbers for each countries’ contribution to this $83bn total. However, Carbon Brief has estimated their contributions (see methodology below). These contributions can be compared with each nation’s share of historical emissions, previously calculated by Carbon Brief.

News: G7 climate commitments judged too weak to bag COP26 success
Green groups say a lack of fresh finance to help developing countries adopt renewable energy and adapt to a warmer planet threatens key climate talks in...
Article: Civil society blasts lack of progress at Cop26 during final day
Activists and civil society representatives have accused rich nations at COP26 of a "shameful" lack of ambition. Reported by Leftfootforward.org
Blog: Climate collapse is not inevitable but ‘great leap’ needed
To bring about a 'Great Leap' scenario, it is necessary to address the fundamental inequalities that are the root cause of the ecological crisis, writes...
Blog: Coming together to save earth could be the best project ever undertaken by the human species
Change will come, and can only come from committed people mobilizing in common cause as a powerful social movement, writes David Korten.
Report: The intersection of politics and spirituality in addressing the climate crisis
The following interview with STWR’s founder, Mohammed Sofiane Mesbahi, examines both the contemporary political and profounder spiritual implications of...
Printer-friendly version